USS Atlantis (NCC-90562) is one of the newest Sovereign-class starships constructed for Starfleet and assigned to the Fourth Fleet's Task Force 47 under the command of Captain Tikva Theodoras. A product of the Beta Antares Shipyard, she features the latest in technological innovations and systems that have been incorporated into the modern design specifications for ships of her class. With Task Force 47's remit of exploration in the Thomar Expanse, she is well suited to provide tactical support for elements of the task force when required in conjunction with her own exploration duties.

While a modern built starship, the latest starship to bear the name Atlantis maintains design elements and aesthetics of the trends popular during the Sovereign-class's original design period. Her modern functionality exists just under a veneer of twenty-year-old design sensibilities, giving the ship a built-in classic feel.

Atlantis was originally laid down in 2397 at the Beta Antares Shipyard with nothing more than a registry number to her when construction started on the vessel. By mid-2398 progress was ahead of schedule, however a handful of technological innovations, newer and smaller ship designs and resource limitations to meet other objectives delayed further construction work on hull number NCC-90562. While progress continued, it was of a much slower pace and limited to key infrastructure components of the ship that would not be changing.

The delays did mean that when work resumed newer computer systems, data transfer lines, and improved shield and weapons systems were eventually implemented into the starship, bringing her up to modern specifications that a handful of other Sovereigns only a few years old would be facing months in refit to receive, though operational pressures would mean these refits would be years down the road.

Originally planned to be christened the USS T'Rhan, named after an ancient Vulcan philosopher on the concept of 'minimal applied force for maximal gain', who advocated that the concept of martial strength in the mind of your enemy could be just as effective as possessing that martial strength. In early 2400, weeks prior to the ship's official commissioning, the vessel's name was formally changed by order of Starfleet Command to Atlantis to replace the Argonaut-class Atlantis that had been decommissioned due to its status as a relic of import to the Federation Science Council. 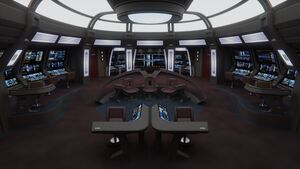 Bridge of the USS Atlantis

Her primary bridge has taken lessons learned from the original Sovereign Class starships and made valuable improvements to remedy early teething issues with workspace and workflow design. In a throwback to another prior generation, the arch behind the command seats replaces separate free-floating consoles to the rear and either side of the centre seats that had been first introduced on the early ships of the class. This removal of obstacles and centralisation of the primary Tactical station opened up the bridge, giving it an easier flow and roomier feel.

With further enhancements to key systems and movement of components elsewhere within the bridge module, space to the rear of the bridge has been made available to dedicate the volume to an expanded missions operations area. This multi-function space can be repurposed for any given task or situation, allowing for enhanced responsiveness and collaboration between on-duty department heads and command staff.

Normally this space remains configured for systems oversight and damage control, with the primary monitor defaulting to a Multifunction System Display, but as with all large monitors aboard the ship, can be quickly reconfigured for a variety of tasks. It would not be uncommon during long transits for this space to be repurposed for survey work or control of the ship while the bridge itself might be used for simulation training of junior officers. Flight operations, crisis management, scientific research and many other pursuits can and will find themselves here at some point. 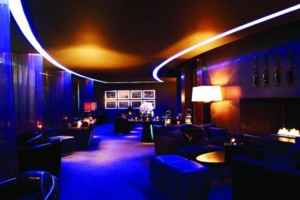 Compartment Deck Five Forward was by original design set aside as the captain's mess aboard Atlantis. Within quick succession, the compartment and two smaller adjacent ones were redesigned to give the senior officers of the ship a relaxed social space that wasn't the ship's main lounge. Never a terribly populated locale, as interaction with the crew as a whole is encouraged, it does serve as a nice retreat whenever needed.

While typically the purview of the command staff, department heads and their assistants, from time to time junior officers and crew members are invited to The Captain's Mess as an informal recognition, extended by either the captain or their department head. This would coincide with the presence of whoever extended the invitation, so turning down a chance to sit with the captain or a senior officer for drinks in a lounge with restricted access is not an invitation lightly turned down.

The Keys are Atlantis' first new totem. Replicated as a joke by Commander MacIntyre prior to the ship's commissioning, they are a simple set of three keys, purpose yet to be clarified, accompanied by a Starfleet delta. They've been adopted by the crew as the unofficial symbol of the watch, changing hands each shift or whenever control of the conn changes.

It is commonly accepted that the keys should never leave the bridge proper, not even to the captain's ready room. Rumours and dire predictions have circulated around the ship about what would happen in such a situation, from the breakdown of the ship to a sudden warp core detonation. Luckily for the more rational members of the crew, nothing bad has come of the multiple situations wherein senior officers have discovered they'd left the bridge without handing over the keys.

Commissioned into service on March 3rd, 2400, USS Atlantis slipped her moorings to begin her shakedown cruise. Systems integration, weapons test and engine performance evaluations were expected plans for the ship's first few months in space to ensure that the vessel was performing as designed, constructed and expected. These operational goals were quickly superseded by developments within the Romulan Star Empire and Atlantis found herself deployed to assist in the matter despite her new and untested condition.