The United Federation of Planets (also known as the UFP or the Federation) is a union of interstellar powers, planets, and peoples, operating under a democratic central government. It is committed to principles of peace and cooperation, coming together for scientific development, mutual aid, and military protection.

The Federation stretches across the Alpha Quadrant and the Beta Quadrant; it speaks of the Federation's power that Sol is considered the 'border' between the two. By the 2390s, the power's territory has spread to over 8,000 light-years with over a thousand semi-autonomous colonies and over 150 members. Most of those members are distinct species and cultures united under the Federation's government and principles, though powerful early colonies may have established themselves as individual members with separate, distinct interests. Because of this size, the Federation shares a border with every major power of both quadrants, as well as many of the lesser powers. 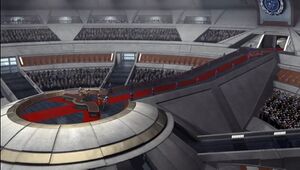 The founding of the Federation, 2161

The Federation was founded in San Francisco, Earth, in 2161. This was the result of ten years of cooperation and diplomacy between the founding worlds of Earth, Andoria, Vulcan, and Tellar Prime, largely prompted by the entrance of the diplomatic humans to the interstellar stage. Less harmoniously, the United Earth Commonwealth had recently emerged from a long war with the Old Romulan Star Empire, which had only ended with the assistance of the other races, and all powers were in relative proximity to the belligerent Klingon Empire. The fledgling Federation was thus motivated by mutual defence as much as cooperation in science and economics.

These and other powers would challenge the ascendant Federation in the coming decades and centuries. Expansion brought in more worlds and more territory, and this naturally brought them into conflict with galactic powers who did not share their principles of cooperation. Most notable have been multiple conflicts with the Klingon Empire in the 23rd century, the long cold war with the Romulans, and decades of intermittent violence with the Cardassian Union in the 24th century. But far longer were eras of peaceful exploration and diplomacy, and the Federation defined itself and Starfleet by those principles for two hundred years.

A Borg cube on course for Earth

The first blow came in 2365, the first encounter with the Borg. One of the most destructive forces in the galaxy, the Borg invaded the Federation twice in less than a decade. This unknowable, incomprehensible threat from outside of known space struck a deep fear into the Federation; finally they had met an enemy who could not be reasoned with through peace, as had been achieved even with the warrior Klingons. While the militarisation of Starfleet that followed was only for a small, specialist force, never before had the Federation prepared weapons for an enemy they could only ever respond to with violence.

In many ways, the Borg threat better prepared the Federation for the Dominion War. Diplomacy was attempted when first the Federation entered the Gamma Quadrant, but soon the Dominion joined forces with the Cardassian Union and sought to conquer the Alpha Quadrant. The Federation was equipped for warfare, psychologically and militarily, better than it might have been ten years prior, but victory was achieved primarily through an alliance with the Klingons and the Romulans. It still came at a high cost, with many member worlds experiencing periods of Dominion occupation, and a strike on Earth by the Breen devastating San Francisco.

The aftermath saw the Federation committed to robust cooperation with its new allies and even its old enemies, sending aid to rebuild the Cardassian Union. Diplomatic intervention was at its highest, the Federation committed to maintaining the balance of power through its new in-roads and positive relations. While the impending supernova of the Romulan sun was unprecedented, so was the Romulan Star Empire's request for aid in evacuating its citizens in time, a reflection of this age of cooperation.

But this cooperation had come at a price. Member worlds were wary of how the Federation's expansion and Starfleet's ventures had exposed them to new threats, such as the Borg and the Dominion, which would never have been found without such deep space exploration. Some thought the Romulans had joined the Dominion War too late, allowing thousands to perish and multiple worlds to fall under Jem'hadar rule, and only joining when their own interests were finally threatened. This buoyed up old resentments and self-interests, and 14 members issued objections to the vast dedication of resources and redirection of border defences the evacuation necessitated.

The attack on Mars

This did not stop the evacuation. But on First Contact Day of 2385, the network of synthetic workers on Mars suddenly turned on the workers and populace, committing mass slaughter and destruction. Over 90,000 casualties were sustained, the evacuation fleet was destroyed, and the atmosphere of Mars remains ablaze as of 2399. Not only was the evacuation abandoned, but the Federation Council placed a ban on creating or researching artificial life. All policy since has focused upon maintaining the interests and protection of member worlds.

The Federation has withdrawn many of its expensive aid programmes, such as the rebuilding of Cardassia, and reduced its diplomatic involvement in other powers beyond maintaining peace and stability. Starfleet has become dedicated far more to protecting Federation territory, the populace leery of exploratory missions which might draw the attention of a new Borg or a new Dominion. In practice, member worlds' needs and protection are prioritised, leading to occasional hardship for colonies and border planets. While Starfleet recommitted to exploration in early 2399, that has been the purview of only one fleet among many - the Fourth Fleet, Bravo Fleet - and for many governments and those on the fringes, the Federation has become insular and disengaged.

In mid-2399, the Federation was shaken by the discovery of the role of the Tal Shiar in the Attack on Mars. Relations with the Romulan Free State have since cooled, and the ban on synthetic lifeforms has been lifted. 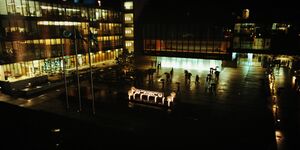 Paris, Earth, is the heart of the Federation's government

The Federation Council is the legislative body, containing representatives of every member world. The Council has the power to create and amend Federation law, and their meeting chambers are in San Francisco, Earth. Finally, the judiciary consists of a hierarchy of courts, headed by the Federation Supreme Court.

New member worlds may petition for membership and join if successful, or be invited. Eligibility for either requires the world to be sufficiently advanced, usually defined as enough to join the galactic community, such as developing faster-than-light travel or, sometimes, communication. The world must also have a single, stable, planetary government that respects the rights of the individual and diversity of political and social beliefs.

Those petitioning must submit this petition to the Federation Council, which leads to an extensive investigation of their culture. This scrutiny often includes unfettered access to government and public records to ascertain if the culture genuinely shares the values of the Federation, and may take several years. However, the Federation commits to an admittance process including a timetable, holding itself accountable to not stymie the development of a culture by entrenching them in bureaucracy, however essential it may be that the process is thorough.

The right of colonies to elect for self-governance is enshrined in the Constitution, and many worlds do eventually separate themselves from their founding state. Eventually, full membership may be attained when certain benchmarks (such as population, development, economic output) have been achieved. Colonies may also be founded under a direct charter through the Federation itself, not subject to the laws of any member world but also not yet member world themselves. Self-governing colonies are led by Governors-General, who are elected by their citizens.

All Federation citizens enjoy a comfortable standard of living

The Federation has no internal currency; due to their principles and sharing of resources, all citizens enjoy a comfortable standard of living. Their ideology of cooperation motivates them rather than material gain out of greed or a need for survival and comfort, encouraging citizens to pursue their own interests and to contribute to the wellbeing of themselves, others, and society as a whole. As such, artists and scholars may pursue their work or knowledge freely, without needing to produce marketable goods or acquire patronage or funding. While everyone is encouraged to attain their potential wherever it may be, society thinks particularly highly of those who dedicate themselves to helping others, be it through community service or advancing knowledge.

The Constitution includes what are referred to as the Guarantees. These enshrine the rights to which the Federation believes all sentient beings are entitled. More than a matter of law, this document enforces and represents the ethics of the Federation and its citizens. They remain as a whole committed to treating all life with dignity, to sharing what they have, and to collectively uplifting one another.

However, the Federation is made up of scores, if not hundreds of species. While being members of the Federation commits them to these principles, and they do so willingly, there is always variety and diversity among the cultures and perspectives of the Federation. This is considered a strength, rather than a weakness, as the Federation value the ways in which they are different as much as they have found common cause. It can make dealing with the Federation unpredictable on an individual basis; a Vulcan will treat very differently to a Tellarite, for instance. But this diversity speaks more of how a Federation citizen or representative may pursue their goals; those goals will universally be tempered by a culture committed to cooperation, knowledge, and peace.

All of this has taken a body blow over the last thirty years. Repeated invasions by the Borg and the Dominion, and most notably the synth attack on Mars, have left Federation citizens feeling vulnerable to outside threat and paranoid of where they might come from. While there has been far from a breakdown of society or the culture of mutual aid and cooperation, Federation citizens are at their most paranoid and self-interested, far more likely to only help their immediate neighbour than reach out to a stranger. 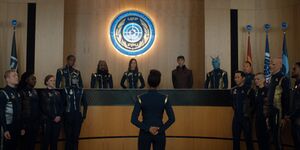 Starfleet has represented the Federation's interests since its founding

The most formal militarised bodies of the Federation are those of individual member worlds. These usually originated in the navies from before their membership, and tend to retain those unique cultures and practices. Each member world maintains its own routine protection with these forces, with production of ships and weapons often supplemented by old Starfleet vessels. In practice, they contend with security threats such as pirates and lend aid to local travellers who might be in distress. In case of sudden attack they are the most immediate and easily-rallied defence. However, they are exactly that: defence, and do not participate in operations beyond their jurisdictions.

Defence for the Federation as a whole and against serious threats comes from Starfleet. Starfleet is primarily a scientific organisation, dedicated to peaceful exploration. The dangers of the wider galaxy, which have been especially prevalent over the last thirty years, necessitate Starfleet ships to be armed and for their crews to be trained and ready for danger. The crews are highly cohesive and exceptionally well-trained, and Starfleet ships are at the cutting edge of technology for the Alpha and Beta Quadrants. Captains are, however, taught to attempt all peaceful resolutions before resorting to violence. While the culture of diplomacy has been undermined by thirty years of existential threat, Starfleet practice has not formally wavered.