The Sovereign-class explorer is a powerful, well-rounded capital ship designed in response to the Borg incursions of the 2360s. By the 2400s, it has been produced in ever-increasing numbers, because of the way the design balances Starfleet's exploratory, humanitarian, defensive, and diplomatic missions. Like the Excelsior before her, the Sovereign will serve the Federation as the core of Starfleet for the forseeable future.

While the Sovereign’s exploration and science facilities are state-of-the-art, they are smaller than those found aboard other explorer-type ships, such as the Galaxy and Odyssey. Mission-configurable space and hook-ups for specialized equipment take a back seat to well-stocked but compact labs for nearly every standard scientific discipline. In other words, the scientific capabilities of this ship in terms of its physical lab space have few peaks and valleys; it's a generalist, not a specialist.

That said, the Sovereign’s main sensor array can penetrate most nebulae and perform micrometer-scale orbital scans, and has proven to be more than a match for most older cloaking devices. The ship carries the most recent specialized probes, allowing it to conduct high-quality surveys and remote studies, and its forward torpedo turret, while primarily designed for tactical use, has the added benefit of being able to flood an area of space with probes remarkably quickly, creating a powerful sensor network.

As Sovereign-class vessels have become more numerous, they are more routinely sent on exploratory missions beyond Federation space. While Starfleet expected some fall-off in capability compared to the Galaxy for pure exploration, this hasn't generally materialized in practice. Where she does lag, though, is in available space to embark secondary or tertiary mission specialists for ancillary missions.

With other dedicated diplomatic platforms such as the Obena and Odyssey available, the Sovereign is not often the first choice for diplomatic duties. While she has the very best technology, less space and attention devoted to diplomacy than is given with the other heavy explorers. Sovereign VIP quarters are spacious and luxurious, but there are fewer of them than aboard a Galaxy, and they are located less conveniently to the forward lounge and holodecks.

The Sovereign’s tactical capabilities make for an occasionally uncomfortable fit with her diplomatic role. The presence of a Sovereign-class starship in a system is an indication that Starfleet takes it seriously, and there is no vessel as sought-after for VIP transport in potentially hostile space, but her status as the nearest thing the Federation builts to a battleship can occasionally make the class’s presence feel like an implicit threat.

The Sovereign is one of the most advanced ships in Starfleet, and that shows in both its capabilities and the engineering problems it presents. Its warp drive matches those of the Intrepid and Prometheus for top speed, though its size and hull geometry give it a slower cruising speed and shorter sprint time than those smaller ships, and its impulse engines are unmatched for raw ability to accelerate and turn a massive starship. This leads to Sovereign being deceptively agile in combat. Each of the ship’s impulse engines has its own fusion reactor to provide power directly.

This advanced warp and impulse system requires some of Starfleet’s best engineers to keep it operating at peak performance, and it rewards skilled handling. While the Sovereign has a smaller crew than the Galaxy, the skill premium in the engine room makes properly crewing these ships an occasionally difficult proposal.

While the Sovereign requires a great deal of very skilled work to keep operating at peak effectiveness, it is capable of continuing to fly after suffering truly massive damage. The starships Sovereign, Enterprise, and Majestic – the three class leaders – have all limped home with crew mostly intact after taking damage that would have crippled or destroyed any other Federation spaceframe, and other ships in the class having shown that durability as well. Majestic, in particular, managed to return to Starbase 16 after losing the entire primary hull, suffering a collapsed shuttlebay, and having the port warp nacelle torn off near the pylon root in a hard fight against Tzenkethi raiders, and was spaceworthy once more in less than five months. 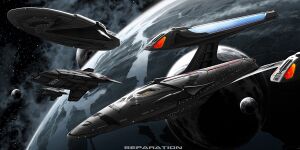 The Sovereign is capable of saucer separation, but it is rarely used by most captains as doing so will leave both halves of the ship without vital systems. The secondary hull has no main impulse engine, while the primary lacks warp capabilities. The separation maneuver leaves the lower hanger of the main shuttle bay open to space, which can provide some unique tactical opportunities, but the maneuver has only been performed outside testing a very few times.

The Sovereign is, simply put, the premier Starfleet capital ship. Its tactical systems are top-notch and given plenty of space on the hull, making Sovereign Starfleet’s most powerful, reliable vessel to lead tactical engagements and to serve as the main bulk of battle groups.

While the Sovereign’s phaser armaments Are quite powerful—advanced Mark XII phaser emitters, with long arrays located both dorsal and ventral on the saucer—it is the Sovereign’s torpedo launch capability that gives it its tactical edge.

Eight standard launchers – three mounted forward, five aft – are an impressive armament already, but it is the forward rapid-fire turret armed with quantum torpedoes that is the focus of the Sovereign’s weapons suite. This turret is capable of variable-geometry fire, giving it a wide target arc, and of firing torpedoes quickly enough to turn the entire forward arc of the ship into a kill zone. Nothing of the Sovereign’s general size range can withstand more than a few seconds of concentrated fire from the turret, and even much larger dedicated warships like the Romulan Scimitar, Son’a dreadnought, and Breen Rezearth dreadnoughts will struggle to do so. The ship’s maneuverability is also well-known, with the sleek spaceframe sometimes seeming almost to dance in its efforts to engage multiple enemies with the forward-mounted weapons and avoid exposing its less well-protected flanks.

While a Sovereign-class ship is not as spacious as a Galaxy, Century, or Odyssey, it is, as far as service in space goes, a very comfortable posting. While individual execuitive officerss occasionally shake things up, the usual arrangement of quarters is that crewmen use six-person, three-room suites, NCOs and ensigns use the numerous four-person two-room suites, lieutenants have two-person, two-bedroom quarters, and senior officers have solo quarters, with the particularly spacious Captain’s and Executive Officer’s suites on Deck 2 with immediate access to the bridge priority turbolift. Individual touches in one’s living space are encouraged, and an officer’s quarters will often speak eloquently to who that officer is and where they are from.

The shipboard amenities are also quite thorough, with multiple holodecks and holosuites providing immersive entertainment, two recreation halls – the larger in the primary hull, the smaller not far from main engineering – offering spaces for large gatherings and group sporting events, and a number of spaces in which to eat and socialize. The Deck 4 officers’ mess is well-furnished, with a full kitchen and kitchen staff in addition to a wide bank of replicators, and the crew messes spread throughout the ship are smaller but still comfortable spaces with full replicator access. Outside emergency situations, replicators are unrationed, allowing unlimited use for food, drink, and small personal items. The centerpiece of shipboard social life is the forward lounge. Lounges on Sovereign-class ships are often given colorful, personal names handed down from the ship’s original crew to those who would follow.

As a large explorer, the crew of a Sovereign is large enough and sees enough turnover that, outside senior staff and a few very long-term NCOs, it does not tend to develop the family-like sort of camaraderie that crews on smaller ships hold. Instead, it is very much like a small town in space, with a rumor mill capable of running even faster than the FTL computer core and a sense that everyone knows who everyone else is but does not necessarily know them personally. Most experienced Sovereign captains have long since given up on chasing or shutting down the rumor mills on their ships, and simply try to embrace the bonding it can encourage while cutting off rumors that damage crew cohesion at the knees. The combination of crew size, controlled but present intimacy, and tendency to find their way into combat and hazard situations has led to the Sovereign having the dubious distinction of being the ship class that averages the most marriages per crew, though Starfleet culture keeps those numbers limited even here.

The Sovereign-class starship was born out the necessity for more combat oriented starships to help combat the Borg Collective, yet keep host to a wide variety of exploratory and diplomatic missions during peacetime. Originally three starship designs were fielded to combat the Borg: Project Sovereign, Project Defiant and Project Nova. Both the Defiant and Nova projects were considered entirely too small to field what was needed; however they were later rebuilt into separate starship designs. For the mainstay of what the project called for, the Sovereign design was chosen to essentially replace the Galaxy as the flagship design of the Federation.

Implementation of the design of the starship and construction began in 2367. Construction moved along quickly and integrating some of the newest Federation technologies into the ship design was proving to be surprisingly easy. The integration of the bio-neural gel pack with the already conventional isolinear chip system proved to have few complications. Other new systems included the field testing of the quantum torpedo turret system, enhanced regenerative shielding system, energy-dispersive ablative hull armor, redesigned warp drive and the previously classified “Type-X+” phaser systems. The Type-X+ would be later reclassified as the Type-XII.

The USS Sovereign was finally completed in 2369 and began its shakedown cruise along the Romulan Neutral Zone. Many aspects of the Sovereign proved to be well above expectations during testing. After eight months of shakedown in open space, the Sovereign was returned to dry dock for finalization and commission.

The Sovereign proved to be a well-founded design in terms of its combat abilities. However, it lacked the high maneuverability of ships similar to its size or the ability to achieve the higher warp speeds seen in the Intrepid and Prometheus classes. That being said, the ship more than made up for itself in terms of phaser power, torpedo compliment, and torpedo tube placement, which supplemented the forward quantum turret.

Several more of the class were put into production and even the USS Enterprise, the flagship of the Federation, was readmitted into service as a Sovereign class. The first real test for the Sovereign class was during the Battle of Sector 001 in which the Enterprise arrived in time to help destroy the Borg vessel in conjunction with the rest of the fleet. Later, during the Dominion War, the Sovereign and Enterprise saw combat while the other ships were slowed in their production in favor of the smaller, more powerful and quicker to build Defiant Class. Near the end of the war, six more of the class were completed and two helped with the Jem’Hadar clean up across the quadrant.

Following the war, the Sovereign class was re-tasked with front line exploration of open space along with its fellow exploration-driven starships. In the decade following the close of the Dominion War, the Sovereign class starships have served in a variety of roles as flagships, command and control centers, diplomatic envoys, first contact headquarters, front line defensive vessels, and exploratory starships. The versatility and endless abilities of the Sovereign have proven it to be a worthwhile design, and it will continue being, for many decades, the mainstay of the Federation fleet.