Based out of Starbase 72, close to the Cardassian border, Task Force 72’s ships are at the forefront of diplomatic intervention and peacekeeping. Their duties focus on engagement with political powers in volatile regions, ensuring stability between major governments and the protection of local populaces.

Unlike nearly every other large spacefaring civilization, the United Federation of Planets does not expand primarily through conquest or even large-scale colonization, but through diplomacy. For over two hundred years, Starfleet has served as the Federation’s first, best impression and its most adept diplomatic arm. First contacts, trade negotiations, ceasefires, and countless other diplomatic exercises conducted by starship captains have slowly but steadily turned the Federation into the largest and most progressive alliance of species the galaxy has ever seen. This is the spirit that guides Task Force 72, the Fourth Fleet’s designated Diplomatic Operations unit.

All starship captains are empowered to conduct negotiations on behalf of the Federation, as real-time consultations with Starfleet Command and the Federation Council is often impossible for front-line exploratory vessels, but Task Force 72’s specific mandate is to handle the most pressing and sensitive diplomatic missions within and outside of Federation space, especially those with national security implications for the Federation and its member worlds. This task force also handles peacekeeping operations and conducts many joint operations with allied or friendly powers, such as the Klingon Empire, Cardassian Union, and the Romulan Republic.

Historically, Task Force 72 was assigned specifically to the Federation-Cardassian Border and remains headquartered at Starbase 72 in the Minos Korva system, but its operations have expanded to the full width and breadth of the Fourth Fleet’s tip-of-the-spear ethos, with vessels in all four quadrants of the galaxy. The evolving diplomatic situation in the Former Demilitarized Zone remains a focus for the task force, with a number of ships directly working with the Cardassian military to end the True Way crisis diplomatically and through direct peacekeeping operations. Other important operations include forging new alliances with Delta Quadrant powers, and ongoing negotiations with neutral worlds within Federation space that the Federation is eager to finally bring into the fold. 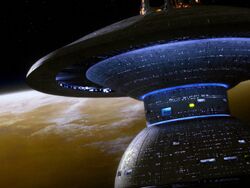 Minos Korva was a system targeted by both the Cardassian and Dominion Wars. It never fell to either power, and is home to the present headquarters for Task Force 72: Starbase 72. It is here that officers slated for command of ships in Task Force 72 are trained in the art of diplomacy and where most TF72 ships are refit and repaired. It is also the headquarters for Starfleet's peacekeeping mission against the forces of the True Way in the Former Demilitarized Zone.

Task Force 72 is one of the oldest Task Forces in the 4th Fleet, notable for never being disband in the turbulent decades since its inception. Task Force 72 was formed initially as a defensive screen for the still-under-construction Starbase 72 in 2373, but its duties gradually expanded to included oversight over the majority of the Federation-Cardassian Border.

It has been a more than a decade since the signing of the Treaty of Bajor ending the Dominion War and the cessation of hostilities between the Federation Alliance and the Dominion. Since the end of the war, Task force 72's mission has changed in size and scope many time. Though the mid 2380's until early 2399 Task Force 72 has encompassed most of the Alpha Quadrant but was stretched thin as Starfleet pulled away resources in the wake of the attack on Mars.

The decision by Starfleet to advance its operations included a reform of Task Force 72's mandate to bring it in-line with the reforms to the 4th Fleet, to serve as one of its specialist units. Already experts at operating in diplomatically fraught regions, Task Force 72 was given the same galaxy-wide operational jurisdiction as the rest of Bravo Fleet.