Designed with lessons learned from Starfleet's stewardship of Deep Space 9, the Unity-class station is a combination defensive outpost and starship support platform. This class was first introduced in the early 2380s, with many units online in important strategic areas across the Federation. Potently defensive, they can easily weather all but the most determined attacks.

At a glance, Unity-class stations consist of an inner core resembling the classic mushroom silhouette used by both the Spacedock-class spacedock and the smaller Canopus-class station within a large docking and cargo ring. The design language draws from the Nor-class, with its curved docking pylons, but with clear Federation refinements and enhancements to that design.

The command module is located at the very top of the station. Studded with communications and sensor aerials, this five story module is elevated from the rest of the station and offers impressive views of the vistas around the station. The uppermost level contains station operations and the commanding officer's office, with the rest of the space taken up by administrative offices and conference rooms. The command module also contains a dedicated backup computer core, a small infirmary module, independent shield generators, and redundant auxiliary power generators, all intended to make it self-sustaining in a station-wide emergency.

The habitat module is, as suggested by the name, where the majority of the station's crew are housed. Roughly conical, this module contains residential crew quarters, recreation areas, labs, medical facilities, and an number of configurable workspaces. In addition, there are four shuttle bays, which are generally prioritized for Starfleet traffic. Combining the functions of both an arboretum and a promenade, the station's plaza is located in the upper third of the habitat module. With massive viewports looking out into space on the top-most levels, this area has multiple floors with restaurants, bars, and shopping, as well as open-air gardens and other recreational spaces. While it doesn't have the same grandeur as the massive biodomes aboard larger stations, this still provides the crew with an area to relax in an environment similar to being on a planet.

The central core contains a number of smaller modules which run the height of the station, each of them containing living quarters for personnel working in them. The majority of the space in the core is given over to mission-critical systems, such as additional labs, engineering support spaces, and computer cores. The central core is joined to the docking ring at the hub module by eight cross-over bridges.

The docking ring houses both the station's primary docking and cargo facilities as well as space for civilian residents and visiting crewmembers awaiting assignment. This ring is split into sixteen segments, eight of which contain quarters and defensive systems, eight containing either a small docking bay or connecting to docking modules. This ring is also home to sixteen runabout pads.

The lowest module on the station is the distinctive quadruple reactor module, which has four high-powered fusion reactors that power the entire station. Attached to its lowest level is a communications antenna. Though less powerful than those found aboard larger stations, it still provides the station with a powerful link to the Federation's subspace relay network.

Of all of the station classes currently in service, the Unity is one of the newest. It incorporates major advances in construction techniques and maintenance protocols that make it a relatively low investment of resources despite its size. All compartments have holographic capabilities, and the station largely uses holographic computer interfaces. Like contemporary stations, this design has many modules that are serviceable or replaceable from the outside, which is intended to allow individual sections to be improved as new technologies come into service. Sixteen powerful thruster arrays in the central core keep the station in position, or can be used to move it when needed. Primary power comes from the four reactors in the lowest levels of the station, which are safe, easy to operate, and long-lasting. These reactors give the station enough power to comfortably operate all of its defensive systems simultaneously and keep the station's docking operations well-supplied. 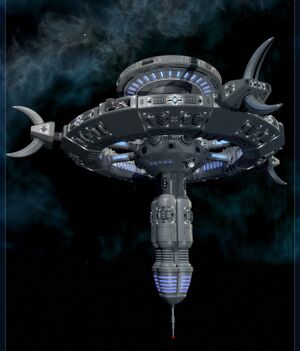 One of the Unity's primary roles is to service starships. To handle vessels of all sizes, the station has eight docking arms located in pairs on the docking ring. By not using an internal hanger, the station can turn around many starships in a short time for personnel transfers and resupply. In addition to these facilities for large ships, there are four small docking bays intended for the smallest starships (such as the Defiant-class escort or Nova-class surveyor) or civilian freighters. Cargo facilities are located close to both the docking arms and the docking bays. Shuttles and runabouts are handled through sixteen runabout pads in the docking ring, as well as four shuttle bays in the habitat module. Every Unity-class station has a fleet of auxiliary craft which are used for utility and defensive purposes. Unlike larger stations, the Unity is not equipped to build ships or perform large-scale refits without the use of external support frames. They do, however, serve well anchoring repair and construction yards, especially given their powerful defenses.

These stations are well-suited to serving as shipping and commercial hubs, especially as the orbital component of a major starbase that doesn't a larger facility. Cargo storage near the docking bays allows this class to efficiently move shipments between vessels, as well as to warehouse Starfleet supplies and replacement parts for visiting ships. The efficiency of the docking arms allows them to approach the traffic levels of much larger stations.

Unity-class stations are powerful defensive platforms, sporting eight massive phaser arrays, eighty eight rotary defense turrets with both phasers and torpedo launchers, and 20 dedicated quantum torpedo turrets. Shields are provided by eight large generators in the central hub, as well as a further three dozen secondary generators spread around the station. This allows the Unity to hold an area of space completely independently, as it would take a very large fleet to provide the station with a significant threat. Defenses are strongest along the dorsal surface of the docking ring, with the only truly vulnerable approach angle being directly beneath or above the station. Given the range of the station's sensors, though, it's unlikely that an enemy could effectively take advantage of those approach vectors.

This design's defensive features have made it Starfleet's preferred large station design for use in contested areas where a full spacedock is not warranted or feasible. Due to the various defensive emplacements at different levels and angles, the Unity creates several cross-fire zones that make it extremely hazardous for enemy ships to approach close to the station.

Depending on a particular Unity-class station's purpose and location, its population can vary wildly. As a general-use station in orbit of a member world, for example, it would have a much larger civilian population than when serving as part of a fleet yard or as a purely defensive outpost. This leads the character of each base to be unique. A defensive outpost might have a larger security staff, and dedicated runabout crews who are sent on patrol missions. A fleet yard headquarters would have many more engineers. A base of this size typically has a core crew of three-thousand, but can support a total population of up to ten-thousand.

As with many other station classes, civilian and Starfleet personnel are housed in different sections of the base, with the Starfleet crew generally being housed either in the habitat module or close to their duty station in the core, while civilians are housed in the docking ring. The plaza is where all roads meet, though, as it's the station's most important recreation and commercial area. There are secondary promenades and places located in the docking ring which are used most by visitors who don't have much time to stray from their ships.

Medical facilities are state-of-the-art, with multiple infirmaries located across the station. The main hospital is located in the habitat module and it is far superior to any starship's sickbay. Station-wide holographic capabilities allow for an EMH or LMH to move anywhere.

During the 2370s, Deep Space Nine was the most important outpost in Starfleet, despite the fact that it was an obsolete Cardassian mining station. Despite not having the technology or power of modern Starfleet bases, it was able to successfully hold the mouth of the Bajoran Wormhole throughout the Dominion War. While Federation installations tend to have simple silhouettes, the Nor-class had a complex profile which allowed its multiple defensive enhancements to target multiple ships from multiple angles at the same time, which is part of why it was only briefly held by the enemy. In effect, its shape allowed it to be a more effective defensive station than its original purpose or size would seem to allow.

Taking this into account, the Starfleet Corps of Engineers developed the Unity as a relatively large station for defense and starship support, incorporating elements of the Nor-class into the design, as well as the rotary defensive turrets developed for DS9 specifically. The result was an elegant, extremely adaptable design. By the early 2380s, half a dozen of these stations were built around the Federation, including at the heart of the speedily-built Devron Fleet Yards which was intended to support the Romulan evacuation.

By 2399, this design is almost exclusively used for new border stations in strategic areas.