Devron Fleet Yards (DFY) is a maintenance and repair facility in the Beta Quadrant on the border of Federation space adjacent to the old Romulan Neutral Zone. Rather than constructing new starships, DFY was originally built to support the massive evacuation effort of the Romulan homeworld in the early 2380s. The yard continues to service starships engaging in humanitarian support and border patrol missions in the area, especially when they need more extensive repairs than nearby border outposts can provide. Though not a starbase, it now serves as headquarters to the Fourth Fleet's Task Force 93, which formerly had jurisdiction over the entire Romulan Border but now handles humanitarian missions across Federation space.

While relations between the Federation and the splintered Romulan factions have remained cool to cordial (depending on the faction), the area near DFY is unstable on both sides of the border, necessitating missions launched from DFY on runabouts and Task Force 93's starships to help stabilize the region.

Devron Fleet Yards was built under the orders of Admiral Jean-Luc Picard in 2381. The headquarters station itself was built in multiple large sections and towed to the Devron system by high-warp tugs, with the drydock frames being assembled later. The purpose of this station was to provide the extensive servicing needed between missions by Wallenberg-class transports that made up the bulk of the fleet used to evacuate Romulus. For the majority of the early 2380s, this station experienced an extremely high volume of traffic. This ended in 2385 with the destruction of Utopia Planitia and the subsequent cancellation of the evacuation effort.

For the next fourteen years, DFY served in a reduced capacity, handling starship servicing for Task Force 93 of the Fourth Fleet, which served as the primary mobile border patrol command for the former Romulan Neutral Zone. In 2399, this fleet yard saw additional attention when TF93 was mobilized as a Federation-wide humanitarian response unit. Presently it is a hub for humanitarian missions on the Federation side of the Federation-Romulan border, especially in the former RNZ.

Compared to other yards, DFY is relatively small: comprising a Unity-class station at its core and several drydock frames to accommodate more extensive repairs and refits than the station itself is able to handle.

Unity-class stations are powerful defensive installations, capable of serving multiple starships at the same time. Unlike spacedocks, they lack a large internal hanger, so ships larger than escorts must dock at external ports. These ports can handle both resupply and provide external power generation while starships are being serviced. The station houses recreational facilities, residences, shops, and cafes with enough capacity to handle both the permanent crew complement of the starbase and the crews of starships undergoing repair or refit.

The station and the fleet yard itself are both commanded from Station Operations which is located at the top of the station's command module. From here, the commodore can oversee all docking operations and coordinate the station's fleet of maintenance craft, shuttles, and runabouts.

Task Force 93's offices are located in the command module as well, with a dedicated Task Force Operations Center providing real-time links to all Task Force 93 vessels connected to the Subspace Relay Network.

The station has eight docking ports for starships of any size. These are located on the edge of the station's docking ring. An adaptable coffer dam can extend to fit any airlock, and then starship crews can enter the station through an airlock. The docking arms also contain umbilicals for fuel and power which can be attached to the appropriate ports on the visiting starship.

Runabouts are handled through sixteen runabout pads on the dorsal surface of the docking ring. They are twice as large as a Danube-class runabout and so can also handle the smallest of the Federation's civilian freighters or their equivalents from other cultures. Shuttles are launched from four bays in the station's habitat module or from the four small starship bays in the docking ring, which are meant to handle small starships such as the Defiant-class or Nova-class.

The station's plaza is located directly under the command module and provides open-air spaces similar to the arboretum on larger stations as well as restaurants, shopping, and other entertainment facilities. This is the equivalent to the promenade on other stations and is the social hub of the station. Like all Starfleet facilities, the base also includes many holodecks, holosuites, and recreation areas like gyms and sports courts, but since it is a relatively small station it relies more heavily on holodecks than specialized recreation spaces. 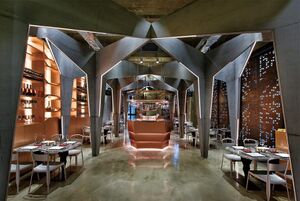 The Sulais Restaurant. One of the most exotic restaurants on the station.

The Sulais is a Romulan restaurant owned by the eponymous Romulan, Sulais. He left Romulan space to bring his cuisine to the rest of the galaxy, such as the jumbo Romulan mollusk, a delicacy that is served over rice, There's also a variety of meatrolls crafted by the finest meats only found on Romulan colonies. Then there's sour candy for those who enjoy it, the osol twists, or for those who still make bets on how many sour candies you can put into your mouth and Romulan Osol Twists happen to be quite tart.

While the headquarters station is capable of handling repairs of moderate complexity on its own, more extensive repairs require the use of one of the yard's drydocks. These support frames provide starships with external power, life support, and radiation shielding, in addition to storage area for repair and refit supplies.

The drydocks are located within transporter and shuttle range of the main station, but are far enough away to not hinder navigation for starships attempting to dock there. While was meant to handle the servicing mainly of Wallenberg-class cargo tugs, it does also have the capabilities to accommodate larger vessels. Currently, there are two each of the Type-9, Type-8, and Type-7 drydocks, but more could easily be constructed should that be necessary.

Compared to the Federation's largest fleet yards, though, DFY isn't meant to handle building or refitting Starfleet's largest ships. Large vessels needing repairs might be patched up here and then sent toward the Federation's core to a more substantial facility.