The Talaxians are a humanoid species native to the furthest depths of Nacene Reach. Formerly an independent race with an interstellar mercantile history reaching back hundreds of years, they fought a disastrous war with the neighbouring Haakonian Order, which they lost following the use of the superweapon, the Metreon Cascade, on the Talaxian moon of Rinax. Since then, the Talaxians have existed either as a servitor race within the Haakonian Order, under the nominal ‘’Autonomous State of Talax’’, or as a diaspora, their people scattered across the in small colonies and groups. They pose no significant threat or opportunity to other powers in their current state, but many have become renowned as outgoing, courteous and helpful explorers - or as devious entrepreneurs.

Please see the Haakonian Order page for full details on their hierarchy and management.

The largest number of Talaxians still reside within former Talaxian space, now entirely controlled by the Haakonian Order, subject to their laws and system of governance, in which they are second-class citizens. The Haakonian Order has a strict military structure, which controls the primary facets of Haakonian life, but not in a necessarily tyrannical fashion. Nearly all scientific endeavours and primary concerns of living are managed through the military structure, which is the primary means by which citizens can gain authority and sway in their state, although many details beyond this are currently unknown. Whilst the rights of subjugated species are minorly acknowledged and respected, such as the Talaxians that are controlled via the Autonomous State of Talax, they are considered vassals and wield little true political power within the Order, although individual Haakonians are known to have sympathy and respect for their underlings.

Any Talaxians of note, whether they be scientists, engineers, politicians or otherwise, all operate at lower levels of Haakonian society. Any that seek further advancement must have the patronage of a notable Haakonian, although this is largely taboo.

There is a growing insurgency/freedom movement of Talaxians within the Haakonian Order. Whilst it has only managed to organise some scattered rallies, espionage or the escape of a few Talaxians from the Order (with an established “underground railroad” emancipation movement in existence), it has managed to elude complete destruction by the Haakonians, and there are concerns that civil unrest will become commonplace unless the government manages to get a handle on the situation. The Haakonians consider these individuals to be terrorists.

Many Talaxians escaped the ravages of the war with the Haakonians or have since got away from the control of the Order. These refugees have found or are seeking homes across the Delta Quadrant, either within flotillas, colonies or bases in the furthest reaches of known space, reaching as far as the borders of the Beta Quadrant from years of travelling. These groups have varying systems of power in place, with some of the larger colonies operating basic democracies, whilst the fleets may use naval structures. Many Talaxians are either alone or in very small groups, abiding - or resisting - the systems of power in the regions they have found or are travelling through.

The diaspora does not typically have many formal representatives and are not a power in their own right, but have been shown to generally be outgoing towards other races, often relying on their friendship, and will nearly always work closely with other Talaxians when they discover them. 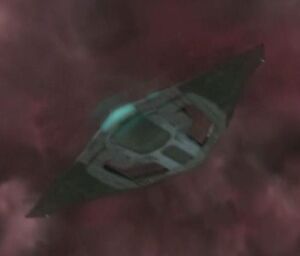 The Talaxian technological infrastructure was completely destroyed or subsumed by the Haakonians’ after the war. Everything within the Autonomous State is controlled and produced by the Haakonian Order, meaning many vessels Talaxians are found on - even those escaping - are Haakonian.

However, some ships from the pre-war era are in existence in the wider galaxy, having escaped the Haakonians and their subsequent conquest of Talaxians to ferry their crews far away. These ships can range in size, from shuttles and small cargo vessels up to more capable warships, although their technology is rapidly becoming antiquated, with few Talaxians able to afford or manage advanced upgrades.

Unless gifted to them by other powers, Talaxians outside of the Haakonian Order do not have access to advanced medicine or machinery. They do not have replicator or transporter technology and could not mount any sort of organised offensive against other powers. They are reliant on guerilla tactics, alliances and cunning.

Even under Haakonian rule, Talaxians are family-based culture, putting a strong focus on the interpersonal relationships with their kind and friends. They quickly and easily adapt to new groups, even non-Talaxians, and ingratiate themselves with one another. Whilst this is not true of every single Talaxians, they are generally outgoing and have a pleasant demeanour. This has led them to being capable explorers, although their instincts are typically to remain close with one another. This instinct has led to a strong sense of civic duty towards other Talaxians, although this has been suppressed by the Haakonians.

They have a canny manner that lends itself well to mercantilism, and individuals and small groups of Talaxians can often be found on the frontiers of the Delta Quadrant carving a living for themselves. Equally, this trait resulted in some less-reputable groups counting Talaxians amongst their numbers.

They have a fondness for humour and stories, and have a storied spiritual history.

Recently, whilst many within the Order have been fairly servile to their Haakonian masters, there has been a growing resurgence of identity amongst the subjugated Talaxians. An increasing number of Talaxians have been undermining or outwardly challenging the Haakonians, with many going so far as to actively escape the government.

The Haakonians claim all Talaxians - regardless of location inside of or out of the Order - are Haakonian citizens. 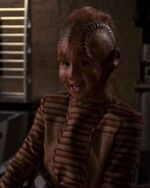 Physically the Talaxians were red-blooded humanoid, with large areas of yellow to reddish-brown spotting on their heads, arms, and bodies. They had pale skin, with a protruding "Y"-shaped bone ridge across the top of their chest area with a plume of ginger hair on the top of their heads. With a dense musculature and two spinal columns, Talaxians are a hardy race well-suited to physical labour, although some of the interconnected organic structures of Talaxians has made medical treatment by other races problematic.

Their ageing and sexual dichotomy is comparable to humans and other prevalent races in the galaxy. Their DNA is believed to be compatible - capable of hybridisation - with most other standard humanoid races.