The Kazon Collective, sometimes known as the Kazon Order, is a loose group within the Nacene Reach of at least sixteen sects whose power and influence can shift rapidly as leaders rise and fall. Historically, the two most powerful sects in terms of military power have been the Ogla and the Relora, while the Nistrim were once powerful and their reach has fallen considerably due to their conflict with the USS Voyager. The Kazon are hostile to almost everyone and have succeeded in making enemies throughout the region. Since they are resource-poor and their society is built around warfare, they frequently raid other cultures for food and resources including water. The Kazon were long subjugated by the Trabe until they overthrew them and took the vast majority of their ships and territory, relegating the Trabe to a nomadic lifestyle.

The Kazon Collective does not have a unified political structure, which is one of the major factors that has kept them from completely dominating the Nacene Reach. Internal conflicts and internecine strife have largely kept them in check as much as the military power of other races has. Leaders in Kazon culture are called 'maje' and the leaders of entire sects are called 'first maje." It is unknown how their current structure relates to their status under the Trabe. 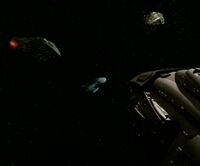 The Kazon's lack of advanced technology is another reason that they have not amassed more territory or completely taken over their region; it is vastly inferior to the Federation in all respects. Only their largest ships are any real threat one-on-one to Starfleet vessels. En masse, however, they prove to be significantly more problematic. Their ships lack matter-energy transporters and replicators, technologies that they had not even encountered these technologies until Voyager entered the region. Starfleet has a strict policy of not trading technology with the Kazon to avoid upsetting the balance of power in the region, given that the Kazon have demonstrated a propensity for warfare and conquest, and this has become a sore spot with the Kazon who desperately want the Federation's advanced technologies.

The Kazon are a patriarchal society, with women having almost no role in public life. Almost all males are trained as warriors, with a rite-of-passage at the end of adolescence that earns males the title 'Jal' before their names. Though they are a warrior culture, their society does not have a strict honor code that has been observed like the Klingons, nor any particular style of martial arts like the Romulans, but rather their sense of progress is merely about defeating one's enemies. Societal dogma is limited and their has been no observed religious influence on Kazon life; Federation scientists suspect that this is because the Trabe eliminated these aspects from Kazon culture while they were enslaved. 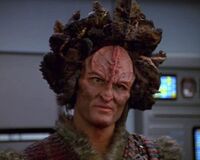 As noted by Seven of Nine, the Kazon are just as unremarkable for their biology as they are for their technology. They are a Humanoid race with ridges on their foreheads. At least two phenotypes have been observed, one with brown skin and the other with copper-colored skin. Their hair is black or brown and grows in chunks rather than strands.

The Kazon in Play