The Romulan Republic was formed in the chaotic aftermath of the Romulan supernova, where fringes of the old Star Empire were left to fend for themselves. Democratic ideals originating in the Romulan-Vulcan Reunification Movement finally found a home in such regions, and over the years a loose coalition became a new, progressive Romulan government.

The Republic occupies a tenuous position in the Beta Quadrant, perpetually threatened by the Romulan Star Empire relocated to Rator and the neighbouring Klingon Empire. It has endured through sympathetic defections from other Romulan factions, a desire by its neighbours to keep the balance of power intact, and the friendship of the United Federation of Planets, which remains eager to support a democratic Romulan future.

The Romulan-Vulcan Reunification Movement, supported by Ambassador Spock, had endured on Romulus for decades before the supernova. Despite its opposition by the Romulan authorities, it remained a persistent underground movement only buoyed up as the Star Empire was forced into closer and closer engagement with the rest of the galaxy with crises such as the Dominion War and the Shinzon Incident. These also diverted the Tal Shiar’s attention away from internal affairs, and by the 2380s the Reunification Movement had many supporters across even the government and military.

The disaster of the pending supernova was politicised as dissidents and the lowliest in society were the last to be prioritised for evacuation, and chaos on fringe worlds was ignored to preserve centres of political power and influence. Expecting the democratic future of the Romulan people would be left to die, several key leaders of the Movement finally stepped from the shadows. One such was Senator Tehitha, who represented the distant Dewa Sector. In defiance of evacuation orders she pronounced that all were welcome on her worlds, and the Tal Shiar suspected her of engaging in secret talks with the Federation. The Senate accused her of provoking disruption and undermining the safety of the Romulan people, and under the high stakes and frayed tensions, she was arrested and summarily executed as a traitor.

This proved a serious misstep by the Senate. Many Romulan civilians who could not secure a formal evacuation had fled to the spinward fringe, and Tehitha’s death did more to encourage resistance to the Star Empire than bring people to heel. Across the government and military, key figures sympathetic to the Reunification Movement abandoned their posts, making off with information, resources, and even whole naval task groups. Through networks established in service of Reunification, dissident corners of Romulan society, including a large Reman faction, formed a rag-tag evacuation force and fled with any they could gather, especially the most forgotten, to distant territories of the collapsing Star Empire.

The rimward-spinward territories of the Star Empire were the least-developed, established primarily as a defensive buffer against the Klingon Empire. Many regions remained uncharted, and the Star Empire’s limited resources were allocated to higher priority territories than this fraught border. Only ongoing struggles against the Sovereignty of Kahless prevented the Klingon Empire from responding to the withdrawal of the Romulan military with aggression.

But the region had long been a breeding ground for dissident ideologies, and here the exodus of the Reunification Movement found a home. Established communities and the newly-arrived refugees banded together to share resources of the colony worlds and the flotilla, and with a growing compact of mutual support and protection, a small network of worlds and peoples thrived as the Star Empire turned to chaos around them.

Some in the Movement wanted to approach the Federation, seek asylum, and perhaps finally pursue unification with the Vulcan people. Opposition took two particular strains; the first, suspicion of Vulcan’s role in the Federation’s withdrawal of help for the Romulan evacuation, and the second, a desire to approach the Vulcans as equals, not desperate refugees.

Border worlds banded together to support the fledgling Republic

By 2389, the Movement had found an uninhabited world in the Vilinat Sector, overlooked in this under-developed region. Rich in resources and a fine settlement prospect for those who had lived for some years now on the refugee flotilla, the world was colonised and named New Romulus, a new home for a new vision of the future. This finished the transformation of the community from a shared collective to a new state. Leaders of the Reunification Movement had long contemplated a more equal and open form of Romulan government, and now these plans were implemented.

With a new senate established and binding together the existing local governments, a new navy formed of the ships that had abandoned the Star Empire, and a populace that had survived by working together, the Romulan Republic was founded.

The Republic did not recognise the legitimacy of the Romulan Star Empire founded on Rator III that claimed to be the continuation of the former government. As that Star Empire struggled to retain, control, or support all the territories it claimed, several systems denounced the government of Rator and pledged allegiance to the new Romulan Republic, its message of hope, peace, and democracy spreading.

The Star Empire had long ignored the Republic, treating it as a small threat that would be brought back into the fold eventually. When a slew of systems joined the newly-established Republic government, the Star Empire realised their mistake, dispatching the Fifth Fleet with orders to pacify these traitors and restore imperial rule. To the Republic it was an invasion force, and not one its nascent navy could easily repel. 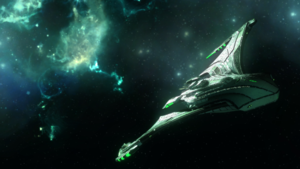 Hoping to avoid bloodshed, the newly-elected Proconsul Radaik herself joined the Republic Navy defence forces, confronting the Star Imperial fleet commander Admiral Thalax. The true details of their meeting remain unclear. The Star Empire has accused Thalax of being a secret Republic sympathiser who always intended on defecting, while others suggest Proconsul Radaik talked him down, showing him the iniquities of the Star Empire and the strength of the Republic’s vision. Regardless of the means, nearly all of the Fifth Fleet abandoned their mission and defected to the Republic, the few imperial loyalists bringing back Thalax’s message condemning the Star Empire as illegitimate, and stating that a new future was necessary for the Romulan people.

This defection all but ended the rivalry between the Empire and the Republic, as the ascendant Romulan Free State exploited this failure and diverted the Empire’s attention. The Republic was free to grow and establish itself on the political arena, especially with the Fifth Fleet added to its navy protect against threats of the Triangle or the Klingon Empire. Klingon Houses in particular, with the Sovereignty finally defeated, tested the Republic’s defences. Nevertheless, the Republic deemed itself stable enough to engage the Federation in diplomacy, as their recognition as a legitimate government would go far to securing their safety.

While the Federation remained inward-looking, it was eager to not appear to favour any one Romulan faction, and had already entered research agreements with the Free State and its Borg Artifact. More forward-thinking officials argued that a successful Republic best-represented the Federation’s interests in the Beta Quadrant. Tentative agreements were reached where the Republic granted the Federation access to regions of the quadrant that had previously been beyond them, opening new opportunities in research, exploration, and resource acquisition. In exchange, the Federation recognised the Republic’s independence, and applied political pressure to curb the interests of the Klingon Empire.

With the Star Empire more focused on its new rivals in the Free State and pacifying the disparate factions of the old empire on the spinward border, and the Klingons now somewhat restrained in their aggression, the Romulan Republic has been free to develop and grow. It is eager to not only provide a new way of life and liberty for the Romulan people, but in recent years has become more committed to entering the stage of interstellar politics to secure recognition and safety.

Replicating the old senatorial structure, the Republic has largely the same government arrangements of the original empire, enhancing and improving systems but keeping many of the workings familiar. The Republic, operating out of New Romulus, holds democratic elections from protectorate or member worlds every 5 years, or sooner following death or abdication of position. All members have a seat of representation and their councilor attends all sessions on New Romulus.

Many local governments persisted through the supernova and after as they supported the fledgling republic, and they retain a considerable amount of devolved power. This is both in recognition of the strength of the Republic’s shared ideology, and a practical necessity as the Republic Senate continues to establish its infrastructure. Regional governors thus hold an unusual amount of power for local Romulan leaders, but are now always elected by those they oversee, and never centrally appointed.

Life in the Republic

Citizens of the Romulan Republic enjoy more liberty and rights than anywhere else in the former Star Empire. Their democratic participation is more direct and secure and they hold the freedom to share ideas and political disagreement. The Reman people in particular enjoy unprecedented liberty and rights, which has won the Republic their formidable loyalty.

Citizens of the Republic live a difficult life, but one of liberty

But the Republic is settled in the former borderlands of the Star Empire, an under-developed region that was primarily a buffer against the Klingons. The supernova and collapse of the Star Empire has not made this situation any easier, and while the Republic is committed to sharing resources and the ideals of mutual support, many citizens enjoy their freedom at the cost of eking out a hard living on a dangerous frontier.

While the Republic is committed to ideals of liberty, its people are still Romulan. They firmly believe they represent the best future for their race, and this is a vision for which they will fight against oppression or destruction with full-throated passion. While the Reunification Movement thrives and was always a backbone of the Republic’s founding and ideology, it views reconnecting with Vulcan to be a more long-term goal. The Romulan people must, they believe, stand on their own two feet with pride before they can extend a hand to their ancestral siblings. This still makes the Federation their closest ally as they curb the aggression of the Klingons, and the Republic is eager to position themselves as friends of Starfleet as it seems to return to past missions of diplomacy and exploration.

The Romulan Republic Navy prides itself on being the shield of Romulan democracy and liberty. The commander of the navy has direct control of all Romulan Republic assets, including any Reman Commando divisions, reporting directly and only to the Proconsul. While the navy has a formalised structure and hierarchy that draws closely on the traditions of the Star Navy, it remains something of a disparate force, formed initially as it was of whatever ships abandoned the Star Empire. The 5th Fleet’s defection gave it a firmer backbone and a slew of light, fast ships. This and the last decade of starship development has seen the Republic favour rapid-response forces that can quickly cover and protect their territory, and are particularly able at employing their cloaking devices for hit-and-runs when necessary.