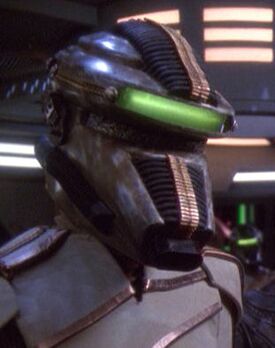 The Breen are a mysterious, ethnocentric, warlike, and extremely reclusive species. Their homeworld is referred to simply as "Breen" by outsiders and is located deep in their space within the Alpha Quadrant. Until 2375 they were mostly seen as pirates, slavers, merchants, and troublemakers. Though they were a nuisance to Federation colonial interests on the coreward side of the Alpha Quadrant, Starfleet had never considered them to be a major threat. That changed when the Breen Confederacy announced its alliance with the Dominion by successfully attacking Earth itself, something not even the Klingon Empire ever dared to do. In the late 24th Century and following a raid on a major Federation installation, the Breen and Federation are on the warm side of a cold war, with regular probing raids emanating from Breen space across the Confederacy's direct borders with the Federation and through neutral space. The decentralized nature of the Breen government and its society have meant that Starfleet has faced little success in attempting to improve this relationship diplomatically, so instead, they have begun to fortify the Federation's borders.

The reclusive nature of the Breen has meant that they have not shared their historical databases; most of what is known of them comes from the species they have raided for slaves or fought wars against, and thus does not portray them in a flattering light. It is known that the Breen economy has been based around the enslavement of aliens since at least their first encounters with the Ferengi Alliance in the 21st century when they raided a Ferengi colony. This was the start of the Raiders' War, which devastated both powers and was only brought to a close by an alliance between the Ferengi and the rising Cardassians.

Rumors of an enigmatic and hostile civilization far beyond the extent of the Federation's colonial holdings in the Alpha Quadrant prompted the Federation to send the USS Ambassador on a long-range mission to seek them out in the early 2330s. Contact was made with a handful of raiders near Beta Renner, but those vessels fled when the large Starfleet vessel came into range. After days of attempting to locate them again, the Ambassador was approached by a much larger Breen vessel which transmitted two things: a rough map of the outer edge of Breen space and the message "Stay out."

This icy-cold first interaction set the tone for Federation-Breen relations for the first forty years after first contact, with no formal diplomatic relations existing between the two powers due to the Breen's unwillingness to open contact. Multiple border raids were recorded as the Federation's claims got closer and closer to the line laid down at first contact. Entire colonies were abducted (presumably for slave labor), but all evidence of who had attacked was also destroyed in every case. There were a few minor skirmishes with Starfleet vessels in the area when attempted raids were intercepted, but given the active conflicts with the Cardassians and Tzenkethi in the same time period, Starfleet was hard-pressed to present any robust reaction to the Breen. In turn, the Breen avoided angering the Federation by minimizing their predations along the border, seemingly aware of the Federation's much greater military strength.

The Breen also fought a series of wars over the course the first half of the 24th century against the Tzenkethi, whom they made a habit of raiding for slaves. These wars tended to be short, and the two powers were considered by the Ferengi to be relatively evenly matched. This would serve to help the Federation during the Tzenkethi War as it prevented the Tzenkethi from being able to commit the entirety of their military force to the conflict. The war was ended by simple cease-fire rather than a treaty with neither side recognizing the territorial claims of the other, and border raids continued in both directions until the Dominion War.

2372 saw the first dealings between the Dominion and the Breen. As part of their efforts to destabilize the Alpha Quadrant, the Founders secretly funneled resources to various pirate and privateer groups, ordering them to attack vulnerable targets and, hopefully, pin down part of Starfleet in a fruitless attempt to keep the quadrant peaceful. One of the rogues they used was Thot Graal, a powerful Breen military leader who frequently masqueraded as a mercenary. The Dominion hired Graal and his band of “pirates” to attack targets throughout the border regions.

While the Breen raids were relatively minor incidents, the contact between the Breen and the Dominion was anything but. Both parties recognized in the other a potentially useful resource and potent ally. The Founders admired the efficiency, ruthlessness, and lack of scruples with which the Breen undertook any task assigned to them; the Breen, for their part, respected the wealth and power possessed by the Dominion. The Founders took care to remain in contact with the Breen and learn as much as they could about them.

During the early stages of the Dominion War however the Breen were remarkably quiet, their raiding activities far lower than would be expected with their neighbors so fully occupied with the Dominion and the machinations of the Founders. It was not until after the war that the reason for this was revealed - once the conflict started in earnest, the Breen were waiting for the best time to approach the Dominion. Always careful to perserve the strength of their position, the Breen looked for a chance to gain the most favorable terms.

In 2375, with the Bajoran Wormhole closed off by the wormhole aliens and the resolve of their Cardassian allies slipping, the Dominion made the offer that the Breen sought, granting them notable systems within Cardassian and occupied space in return for their participation in the war. The Breen made their presence felt immediately, with a bombing raid on Earth and a counterattack in Chin'toka. It was at Chin'toka that the most important piece of Breen technology made its debut - the Energy Dampening Weapon. This weapon forced the Klingons to spend weeks facing the Dominion alone, as only their vessels could withstand this powerful weapon, against twenty-to-one odds.

However, a countermeasure to the weapon was eventually devised which could be used aboard Federation and Romulan ships, and the war again turned against the Dominion. In the final hours of the war, the Breen earned an enemy that would hate them even more thoroughly than any of their previous targets: the Cardassians, who they willingly joined in the attempted genocide of Cardassia Prime ordered by the Founders.

The Breen have been characteristically tight-lipped as to their reasons for wanting to work with the Dominion, but Starfleet Intelligence has interpolated that there may have been some affinity towards the Founders by the Breen because of their non-humanoid nature, given that the Breen believe all humanoids to be beneath them and that the Dominion is an empire predicated on humanoids being subservient to non-Humanoids. It is also possible that the Breen simply saw the opportunity to finally take the large expanses of space beyond the Federation's borders which contained hundreds of resource-rich worlds and millions of potential slaves.

The Treaty of Bajor was particularly punishing to the Breen. While Romulans and especially the Klingons demanded blood and treasure in punishment for the horrible harm both suffered as a result of the war, the Dominion still held the incredible bulk of its power in the Gamma Quadrant and the Cardassians were thoroughly devastated and had little of either left to give. This left the Breen to bear the brunt of the wrath of the Alpha Quadrant powers. Their military power was severely limited (including with restrictions on shipbuilding and ground troops), and brutally steep reparations were ordered to be paid. Breen resources funded the rebuilding of Betazed and Cardassia Prime, as well as a large portion of the rebuilding of the Klingon fleets devastated by the months that the Klingons stood alone.

After nearly fifty years of trying, the Federation was finally able to establish an embassy in Breen space, though due to environmental difficulties (the Breen inhabited only extremely cold planets) and due to the Breen's complete unwillingness to allow outsiders to see their homeworld, this was housed aboard what was essentially a larger version of a communications relay station on the Federation border.

The limits on shipbuilding ended in 2380, and in 2384 the Breen unilaterally ended reparations payments, citing difficulties on their homeworld. Starfleet, wishing to avoid another costly war, negotiated modifications to the Treaty of Bajor's sanctions, limiting Breen imports of weapons technology. This turned out to be a mistake: the Breen had the technology they needed in the form of the old Dominion shipyards built within their space and stepped up military vessel production to a high rate. By 2385, they had recovered to 75% of their pre-war ship numbers, with a number of new technologies fielded on their spaceframe designs, and with the devestating synth attack on Mars in the same year, the Federation was quite unable to respond to this provocation While it was not believed that they have managed to adapt their energy dampening weapon to bypass the countermeasures developed during the war, and while the Dominion's polaron beam weapon technology has proven incompatible with the power generation systems used aboard their cruisers and frigates, they have made significant strides in adapting Dominion shield, armor, and structural integrity technology for their ships, making them far more resilient than before.

In the 2390s, Starfleet invested considerable resources into the Barzan System when the technology to stabilize the long-useless Barzan Wormhole was discovered. This allowed them to transform the relatively insignificant system into the Federation's only link to the Delta Quadrant, a hub of commerce and exploration on the scale of the Bajor system. This system is coreward of Ferengi space, and so past the Federation's direct borders with the Confederacy, a lone and renegade Thot (at least according to the official statements by the Breen through the embassy station) brought a fleet through the labyrinthine Ionite Nebula to pass through neutral space around the Ferengi and strike directly at Barzan.

The fleet included a new type of dreadnought with an enhanced version of the energy dampening weapon in use during the Dominion War, one that circumvented the safety protocols in place aboard Starfleet's defensive screen through sheer power. Two Federation ships were destroyed and a third was crippled in the battle, which was only one through ramming the Breen ship. This sparked the reorganization of Task Force 9 as a mobile diplomatic and defensive force along the Breen border, as well as orders from the Federation Council to increase the level of fortification along the border to prevent this from reoccurring.

The Breen military is largely decentralized and under the control of individual Thots, though standardized ship designs have been observed, insofar as this is entirely possible with vessels that are a hybrid bio-organic technology and more traditional systems. Raid groups are a frequent threat along the border, which are generally a minor nuisance but which occasionally result in brutal slave raids; Starfleet's policy for the majority of the 24th century has been to react to these events with equal force but not to proactively hunt down Breen vessels.

The Breen operate dreadnoughts, cruisers, destroyers, frigates, and fighters, though few support vessels or science vessels have ever been observed by outsiders. Their shipbuilding philosophy favors heavy armament over defensive capabilities, relying on alpha strikes to cripple targets before they have a chance to respond. In general, a single Breen vessel is not a match for the equivalent Starfleet vessel pound-for-pound, given that they are significantly more heavily-shielded, but Breen vessels are rarely alone.