Starbase 86 is an Aurora-class starbase located in the Beta Quadrant on the edge of the Azure Nebula. The base serves as the current headquarters of the Fourth Fleet's Task Force 86. A nearby region of space known as The Triangle remains an unclaimed border-zone between United Federation of Planets, Klingon Empire and Romulan Republic space where piracy has flourished.

The starbase was originally constructed as a logistics hub for Federation colonies in the Corvan, Adelphous and Tandara systems. These worlds, among other smaller colonies, each experienced rapid population growth once it became clear that peace had come to the region following the signing of the Khitomer Accords in 2293. This necessitated a focal point for trade and resource distribution in the sector. The Azure Nebula was and is of scientific interest to Starfleet, given its ability to confound ship's sensors and the several starship disappearances that have occurred within.

Construction of Starbase 86 began in 2300, with key systems operational by 2302. However, bringing the station up to full operational readiness was then delayed by several threats made by the Romulan Star Empire. Despite the Star Empire's official diplomatic silence, Starfleet learned of their displeasure through a network of backchannels and trusted contacts. Romulan intervention was heavily implied, but as in all dealings with the Romulans, nothing was certain. Completion of Starbase 86 was therefore put on hold until defense cooperation agreements had been obtained from the Klingon Empire. With these in place, all starbase systems were brought fully online in early 2305. 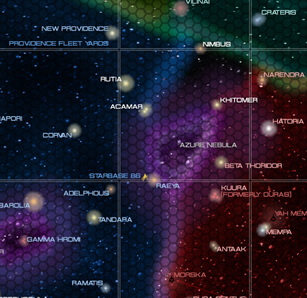 Starbase 86, situated near The Triangle and the Federation - Klingon Empire border.

As The Triangle demilitarized over the course of the 2300s, the area became a safe haven for those evading any form of galactic authority. Orion pirates, substance and slave trafficking cartels, extremist groups and even the fallen Klingon Hunters of D'Ghor have found homes in The Triangle. Some have made their bases in the impenetrable depths of the Azure Nebula itself.

Nefarious activity within The Triangle has only grown over the decades. Starbase 86's role has in turn grown to include coordination of counter-piracy efforts across the sector. Justice and policing on frontier worlds such as Nimbus have come to occupy a large portion of Starbase 86's operational resources. Occasionally, ships are dispatched into The Triangle to put a stop to pirate activity severe enough to be deemed a security threat. These missions can be extremely dangerous, with starships required to operate alone in volatile territory prone to hostilities. For this reason, Starbase 86 acts mainly as as a center for the internal policing of areas within Federation space. Intelligence is gathered and collated preventing criminal groups from the triangle from getting a foothold on colony worlds.

Starbase 86 has also been an important interface between the United Federation of Planets and the Klingon Empire. The station is often the first resupply stop for Klingon vessels travelling further afield across the Federation and beyond. During the Dominion War, Starbase 86 was used as a staging ground for Klingon forces travelling towards the front lines in the Alpha Quadrant. The starbase has maintained a large Klingon population for most of its life, with all manner of traders, warriors and bards seeking honor or just getting by in their own way. Klingon diplomatic delegations are frequently entertained and conferences held aboard station.

Aurora-class spacedocks are the smallest stations classified as spacedocks, but they are substantially bigger than almost every other station in current service. Starbase 86 is a very large installation, with the capabilities to refit, repair, and resupply any starship that needs a safe haven, in addition to being able to build brand new starships in its massive hanger.

Starbase and task force operations are both located above the main spacedock in the towers on the station's ventral surface. From here, the station's command staff can ensure that traffic around the station is flowing optimally and that threats are identified and dealt with quickly. Similarly, task force staff are provided with direct access to the station's main communications arrays and other command and control functions.

Unlike a Spacedock-class station, ships can enter Starbase 86 through eight sets of space doors, four dorsal and four ventral. This provides access to eight sets of docking arms, with sixteen berths total. Even despite its smaller size, ships can dock, receive the appropriate service, and leave more quickly here than when docking with the station's larger cousin. The Federation's largest ships (as wide or wider than a Nebula-class heavy cruiser) must dock externally.

Many runabout pads are located in the docking ring. This structure also allows the Federation's largest ships to dock directly with the station, even though they wouldn't fit within the spacedock itself.

As a Starfleet installation of significant size, Starbase 86 has a number of special recreation areas catering for the cultural traditions, pass-times, ceremonies and culinary preferences of its hugely diverse population. For other more specific needs there are, of course, the base's holosuites most commonly found along the outer edge of the habitat ring. 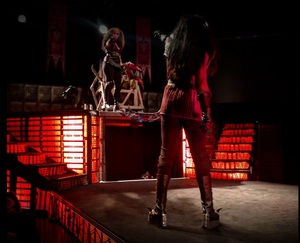 A performance of Aktuh and Maylota enters its third act.

Starbase 86's proximity to the Klingon Empire has bestowed upon it a large population of warriors, tradespeople and itinerants from across the imperial realms. The Opera House was installed by popular demand shortly after Starbase 86's activation and subsequent rapid growth of its Klingon demographic. The auditorium itself faithfully adheres to the SegH style. Ornate Klingon blades and replicated furs line the walls, along with torches that flicker with open flames. Performances are scheduled nightly, with tickets for first showings often hard to obtain despite the seating capacity of 1,500. Notable sell-out performances include Malsandra's Death, and a recent adaptation of Shevok'Tah Gish. More recently, Qa'vaQ has established itself as a notable destination for shows touring outside the Empire, occasionally drawing spectators from as far as Andoria. 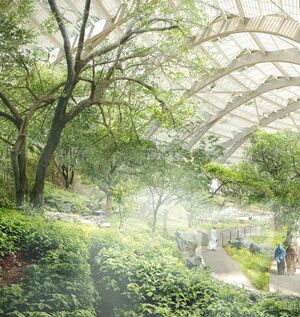 Outer edge of the Starbase 86 arboretum.

Occupying the entirety of habitat ring decks 16 through 22, Starbase 86’s arboretum boasts a vast range of flora from across all four quadrants. Advanced climate control technology allows for the simulation of several different climate zones throughout the length of the deck. Several biodomes have also been constructed within each zone for particularly sensitive species that require more closely monitored atmospheric, nutrient and soil conditions. Outside of the domes, an expansive network of footways extends through each climate zone. Visitors intending to go camping or hiking within this huge space would do well to register their trip with one of the arboretum rangers before setting off. While there are no animals or plants within the arboretum that would pose a danger to any Starbase 86 inhabitant, visitors embarking on camping trips or hikes would be well advised to register first with one of the environment rangers. It is not unheard of for individuals to get lost in Tarkalean maze grasses, with the Predonian tundric razor rocks presenting some navigational difficulties, too.

Renowned exobotanist Krev Halrathyan oversees the arboretum in all its splendour. She is ultimately responsible for the many research and cultivation projects being conducted in this unique orbital space. Any use of antigrav platforms, or any other self self-propelled vehicle within the arboretum must first be authorised by her. She can often be found tending to some of the garden’s rarer species, the Yel’Sharath mountain tree being her pride and joy.