The Mellstoxx System is in Federation territory in the Beta Quadrant, approximately 40 light-years from Sol in the direction of Klingon and Romulan space. Originally home to a Betazoid colony on the third planet, since the mid-23rd century it has been home to Starbase Bravo and a launching point for Starfleet operations protecting the spinward borders. Since then it has grown as a hub of regional activity, and has been described as the ‘last stop in civilisation’ before the frontier.

The star of Mellstoxx was identified by many Federation members before the UFP’s founding; Earth designated it ‘HD 149026.’ Limited warp speeds, tensions with the Klingon Empire, and a focus on expansion via diplomacy in the Federation’s early decades meant it took until the late 22nd century until it was properly surveyed. While this identified the third planet as a prime candidate for colonisation, only in the early 23rd century was a settlement proposal made by Betazed. This proposal was accepted, with permission granted for the colonial project to rename the star to Mellstoxx.

Mellstoxx III quickly gained a reputation as a rural idyll

Mellstoxx III was settled with a primarily Betazoid population, and the founding colonists’ culture has persisted ever since. Many were younger offspring of noble families seeking their own prospects, granting the colony a certain gentility in design and community. Agricultural development became a colonial priority, keeping the population fairly dispersed and the infrastructure largely rural. By the late-23rd century, Mellstoxx III was a breadbasket of the region, commanding significant political and economic influence as it fed nearby colonies and facilities. The prison colony on Tellun, for example, was founded specifically because of its proximity to Mellstoxx and its food shipments.

Imperial advances during the Federation-Klingon War of the 2250s did not reach Mellstoxx, the KDF’s advance stymied by the Paulson Nebula. A small outpost was established at the periphery of the system to act as early warning system and to support basic resupply of ships en route to or returning from the front. The outpost’s convenience continued even after the treaty as tensions simmered on the Klingon border and the Romulan Star Empire began to re-enter the galactic stage, and so plans were made for a more permanent facility. The Spacedock Class designated Starbase 4 was constructed in orbit of Mellstoxx III in the latter half of the 23rd century, and supported Starfleet and civilian activity in the region for over a hundred years. 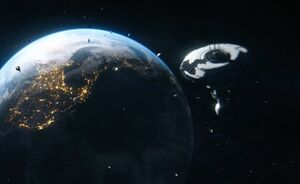 Starbase 4 kept the Mellstoxx system safe and protected through the political upheaval of the early 24th century and contributed to the region’s increased security. It was in this era, as borders settled and more distant colonies were established, that Mellstoxx became considered one of the more peripheral ‘safe’ systems. It was not a region at any particular risk from pirates or military incursions, and so the civilian population grew as people used Mellstoxx as the last stop before a frontier where there were worlds to settle, mysteries to explore, enemies to guard against, or riches to uncover.

It was for this reason that Mellstoxx III was chosen as the home for a new satellite campus for Starfleet Academy in 2356. When the Fourth Fleet took its modern form a decade later, its headquarters were established on Starbase 4, and the academy campus became the main training centre for its officers.

Mellstoxx was the target of a failed attack by the KDF in the Federation-Klingon War of the 2370s. Cloaked forces moved past the initial defence lines and then into the Paulson Nebula to evade detection, but the nebula’s impact on their sensors meant the KDF task group failed to anticipate Starfleet reinforcements headed for Starbase 4. The reinforcements arrived in time to rout the strike force, and Mellstoxx remained secure throughout the rest of the conflict and the ensuing Dominion War.

It was due to the Mellstoxx colony that Betazed opposed Federation support for and evacuation of Romulans when news of the supernova became public; the colonists had no interest in becoming a home for refugees, and pressured their homeworld to support them. Local leaders organised small protests against the small evacuation flotilla initially assembled, and celebrated what they deemed a victory for their self-determination when Federation support was withdrawn following the Attack on Mars.

The ensuing collapse of the Romulan Star Empire and the rising instability of the Klingon Empire made the Federation’s spinward borders more unstable. Eager to keep regions such as Mellstoxx secure, plans were moved up to replace the ageing Spacedock-class Starbase 4, and construction began of a brand-new Guardian Class. Construction finished in early 2399, coinciding with the establishment of the Fourth Fleet’s new mandate to restore Starfleet involvement beyond Federation territory. This, and the continued prosperity of the Mellstoxx III colony, guarantees the system’s regional importance for the coming decades.

Starbase Bravo is a Guardian-class Federation space station, one of the largest ever constructed. Beyond providing protection for Mellstoxx and supportive infrastructure for local Starfleet operations, it acts as a regional hub for commerce, diplomacy, and colonial affairs. With the territories beyond Mellstoxx an increasingly dangerous frontier, Bravo is considered the last stop in civilisation before the borderlands.

The first and largest colony of the system. Settled by Betazoid colonists in the early 23rd century, Mellstoxx III is an affluent agricultural world providing food and supplies for many worlds and facilities of the neighbouring regions. Despite the dispersed nature of its communities and farmlands, it far from backwards or under-developed, and is a home of efficient industry developed in concert with the world’s natural beauty.

Settlements grow along agricultural hubs, with most of the many communities outside of the major spaceport hubs home to mere thousands. The majority of colonists dwell in comfortable, modern abodes adjacent to their farmlands, sustainably built from local materials. Others, particularly community leaders and those who have some claim, however distant, to the noble houses of Betazed, build large, traditional Betazoid manors. Some are constructed from local stone, a blend of commitment to Mellstoxx and a harkening back to their home; others have imported material from the homeworld as a demonstration of their commitment to tradition. Such impressive homes are usually hubs for community activities, their owners influential figures.

Mellstoxx III's importance to the Betazoid people has only grown since the Dominion War and the devastation their homeworld suffered under occupation. It was one of the first Betazoid colonies, and thus for many families is home to some of their oldest holdings, and manors. This has only exacerbated Mellstoxx's nature as a breeding ground for cultural nostalgia and a retention of tradition. While the majority of the residents of Mellstoxx are Betazoids, and the Betazoid culture remains dominant, colonists from all over the Federation have made their homes in the settlements. They tend to live within the more centralised and modern towns in the spaceport regions, keeping them cosmopolitan hubs comparable to any Federation world. Non-Betazoids only tend to live in the more parochial regions if they are particularly prepared to engage in Betazoid custom and politics.

Mellstoxx III is also home to the Fourth Fleet Training Command, its facilities and Academy campus constructed in a temperate region of the northern hemisphere, close to one of the secondary spaceports of the planet. The region has seen considerable growth and development over the last fifty year.

While the people of Mellstoxx III are largely happy for the presence of Starfleet, which keeps them safe and brings considerable attention and prestige to their world, the colonists retain something of an independent streak. Many of them are from families who struck out to find their own fortune centuries ago, and are determined for their interests to not be subsumed by Starfleet. This has been seen in some grudging disapproval of perceived favour given to settlements nearby and supportive of the Academy campus. Worst was the opposition on Mellstoxx to receiving any Romulan refugees in the 2380s, which caused strain between locals and Starfleet, and resulted in pressure placed on Betazed to oppose the evacuation efforts.

No other settlements in the system come even close to rivalling Mellstoxx III. Some moons of the system have been settled with pressure domes, but none have more than several thousand inhabitants on the whole moon.

The moons of Mellstoxx IV underwent terraforming processes in the early 24th century, with hopes they could become homes to further colonies. In practice, this resulted in a smattering of moons with inhabitable biomes but largely rugged landscapes. While the alpine moon of Tranter enjoys some success as a tourist attraction and holiday getaway, others range from truly unwelcoming to simply too difficult to offer more than a niche interest. Their greatest purpose has become as training grounds for the Academy campus, able to provide a variety of environments in survival classes.

In the late-23rd century, precious minerals and gases were identified in the atmosphere and moons of the gas giant Mellstoxx V. The planet’s orbital infrastructure has become the second-greatest industrial complex in the system, after Mellstoxx III’s agriculture itself, with a variety of mining bases and facilities built in orbit or on the moons themselves.

There are no major civilian settlements in the moons of Mellstoxx VI, but its largest moon, Stinsfor, is home to the main flight training facility for the Academy. Mellstoxx VII’s complex ring system, and the atmosphere of the moons and the planet itself, offer a variety of conditions to train new pilots.

Mellstoxx II, a desert world, has no permanent settlements, with the Betazoid colonists showing no interest in its rugged climate. Scientific expeditions and Academy survival courses sometimes set down for a period.

Mellstoxx is positioned at the edge of what is considered the ‘stable’ regions of the Federation; a notably safe and secure system, it stands at the threshold of the more rugged borderlands.

Notable nearby systems or regions include: