The Kraylor are a spacefaring species that are native to the Delta Quadrant. A technologically sophisticated species, since 2374 their homeworld has been under a blockade by the Annari Empire. As a result of this, they have become desperate to remove the Annari from their space, going to extremes to fulfil this objective. 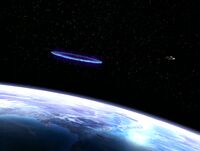 The Kraylor homeworld from orbit.

The Kraylor government is known as The Unified Global League of Kraylor. The nation states of Kraylor formed a democratically elected planetary wide government in the twenty-third century. Each nation is represented in the Kraylor Legislature Assembly which is led by the Chairperson, who is the de facto Kraylor head of state and government.

At the turn of the twenty-fourth century, Kraylor became a warp capable species. It's society become almost obsessed with scientific breakthrough and technological advancements shortly after this, the Kraylor's development cultivated at a higher rate than most species. The Kraylor, in their wisdom, focussed a high amount of their research focus on technology to defend the home world shortly after their first encounter with the Annari Empire. A massive planetary shield, one that the Annari have not been able to break, defends Kraylor from being annexed. 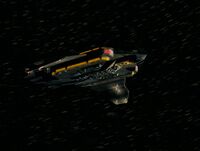 The Kraylor Armed Services operate a small fleet of starships that are able to achieve high warp speeds, are outfitted with regenerative shields and cloaking technology. They have yet been able to create weapons that are more powerful than the Annari. The Kraylor military does not have enough ships to completely remove the Annari blockade, but what ships they do have there are enough to undertake covert trading missions.

Very much like the Federation, the Kraylor society was once based around the betterment of their people but this has since changed when the Annari attempted to annex them into their Empire. The Kraylor have since changed their focus to be one based around survival and liberating their homeworld. Many Kraylor work to achieve this goal, but there have been some that have found a way to escape the homeworld and attempt to build a new life for them on other alien worlds. 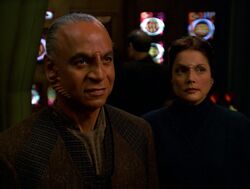 A pair of Kraylor adults.

A bipedal species, the Kraylor are recognised by their gill like jawlines and nose ridges. Kraylor blood is red (iron-based).

Their ageing and sexual dichotomy is comparable to humans and other prevalent races in the galaxy. Their DNA is believed to be compatible - capable of hybridisation - with most other standard humanoid races.

First encountered in 2377 by the USS Voyager, the Kraylor at the time were suffering from a resource shortage on their homeworld. This was down to the fact that three years prior, the Annari started a blockade around their planet attempting to force them to join their Empire. At the time, the Kraylor were a resource rich and technologically advanced race, who were able to prevent the Annari from annexing their world. However the blockade came with consequences, with one being the lack of food and medical supplies the Kraylor people needed. Prior to the blockade a group of Kraylor scientists and military officers had left Kraylor to develop cloaking technology. They were able to complete this project in time to give their people the chance to survive the blockade. With help from Voyager the first Kraylor ship with a cloak reached its homeworld successfully and with the prototype of the cloak on board were able to get pass the Annari fleet without any losses. This major victory gave the Kraylor the lifeline they needed to survive the Annari oppression.

Twenty-five years later and the Kraylor changed their focus in defeating their enemy. Again secret research outposts were setup far away from their homeworld and the Annari Empire in attempt to develop superior weapons that they could equip onto their ships. One option they looked into was the use of omega molecules as a source of power. This attempt was discovered by Captain McCallister of the USS Odyssey. Their experiments resulted in the creation of a subspace rupture in the Delta Hedalos Sector, which was in close proximity to one of their deep space research bases.