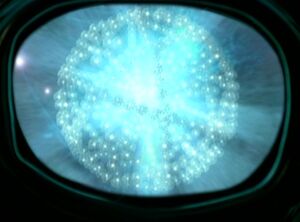 Omega is highly volatile and challenges most standard forms of containment.

An Omega molecule is the most powerful substance known to exist. Highly unstable, technology to properly contain it is limited and the explosion of only a few molecules can destroy all subspace within several light years.

Federation scientists have theorised that Omega existed, and was potentially the primal source of energy, for the Big Bang. This has never been confirmed, and remains a theory. It is clear that each molecule contains the same energy as a warp core, and theoretically a small chain could power a civilization for an indefinite period.

Omega’s high instability has impeded further study, however. The destabilisation of molecules and ensuing explosion destroys subspace, rendering warp travel and instantaneous interstellar communication impossible. Such a catastrophe would isolate all inhabitants of a region, possibly dooming them if they were reliant upon interstellar trade for resources, and have untold political and social fallout. The destabilisation of Omega also precipitates a catastrophic explosion, with one molecule capable of destroying a starbase, and exudes massive and deadly amounts of theta radiation. As effective containment technologies have yet to be developed by the Federation, research remains limited.

Knowledge of Omega’s existence is restricted within the Federation, and it is unknown if other major powers know much, if anything, about it. Starfleet is aware the Borg Collective not only knows of Omega, but considers its assimilation a priority at all costs, despite massive losses over the course of their research.

A Starfleet physicist by the name Ketteract conducted classified research on Omega in the mid 23rd century, and successfully synthesised a single molecule. It destabilised a fraction of a second later, killing the entire one hundred and twenty-six crew of the research station and creating a subspace rupture across several light years.

The incident was covered up by Starfleet, and the devastation to the Lantaru sector falsely attributed as a natural phenomenon. Over the next century, Starfleet concluded that Omega represented too massive a threat to the entire galaxy for its existence or study to be risked. The Omega Directive was developed accordingly, restricting knowledge of Omega.

In 2374, the USS Voyager encountered a Delta Quadrant civilisation that had successfully synthesised and temporarily stabilised Omega molecules. With the assistance of crewmember Seven of Nine and her knowledge of Borg technology and science, Voyager developed further methods of containing and safely destroying Omega molecules. 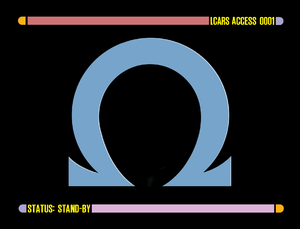 When a Starfleet ship detects Omega, the Omega Directive is in immediate effect.

The immense threat to all interstellar civilisation and life presented by Omega precipitated Starfleet’s establishment of the Omega Directive, a highly-classified general order. Only starship captains, flag officers, and specialists are briefed on even the existence of Omega.

If a starship detects the Omega molecule, the ship’s computer immediately disengages engines and locks out all computer access, displaying the Greek letter ‘Omega’ on every bridge console. Only the captain can disable the lockout and only from a secured location in order to access the sensor data. At this point, the captain must implement the Omega Directive at once, disregarding all other general or active orders, including the Prime Directive. Starfleet Command must be immediately notified so a specialised team authorised and prepared to deal with Omega can be dispatched.

Typically, a starship must continue to monitor the detected Omega molecules until the arrival of the specialised team. Contingencies, such as modifying torpedoes or even the construction of a resonance chamber, may be prepared. Under no circumstances is a captain given permission to discuss Omega or explain the proceedings to their crew.

Avoiding the catastrophe of Omega’s destabilisation becomes the priority of all available resources. All non-emergency travel by civilians or Starfleet to fallout zone is suspended and if practical, civilian populations are temporarily evacuated to prevent potential stranding. Starship captains have incomparable authority to minimise the harm in the case of Omega’s destabilising or to destroy it. If Omega were detected on the planet of a pre-warp civilization, the suspension of the Prime Directive would justify any necessary means of its removal and eradication. 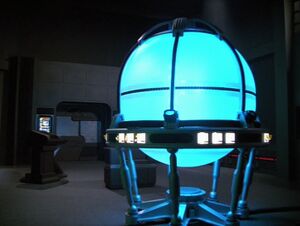 The harmonic resonance chamber can contain and destroy Omega molecules

Starfleet ships operating in the vicinity of or seeking to destroy Omega molecules must undertake multiple measures for success and safety. The Directive instructs a starship to install multiphasic shielding around the warp core to protect it against subspace radiation. Officers who may be in physical proximity to Omega must be inoculated with arithrazine against extreme theta radiation poisoning, in a dosage exceeding standard guidance.

Omega can be destroyed with photon torpedoes, though of a modified yield exceeding eighty isotons, far above any standard weapons deployment. Gravimetric charges or torpedoes can likewise destroy it, though all such weapons are only effective against a relatively small cluster. Against larger clusters, it is expected to trigger the destabilisation of remaining molecules. Such simple use of torpedoes against Omega is thus only sanctioned against low numbers of molecules, or if the molecules have been relocated to a region they would cause less damage, or in emergencies.

The USS Voyager developed the technology of a harmonic resonance chamber, capable of dissolving the inter-atomic bonds of any Omega molecules transported within and destroying them. Designs for the chamber are available to Starfleet ships upon the activation of the Omega Directive, and while their construction is resource-intensive and complex, using them to trap and destroy or transport molecules remains the safest recourse.