The Klingon Defense Force is the centralised navy of the Klingon Empire. While the KDF consists in practice of military forces drawn from the Great Houses and their vassals, its command structure exists independent of house politics and answers directly to the Chancellor. With the KDF drawing on extant forces to bolster its ranks in times of needs, its formal power is ever-shifting depending on the political situation within the Empire.

The Klingon Defense Force is as old as the High Council, the natural development of the feudal levies that the Emperor was historically owed. The Empire’s original expansion through the stars was at the choice and direction of the Great Houses seizing more neighbouring territory. But early, ambitious Emperors also wished to maintain their own power, calling the Great Houses to war for territory they could claim and keep for the resources or distribute to win support. This summoning of a vassal’s forces by the supreme imperial authority paved the structure for the KDF.

As the Empire encountered large and rival powers in the Romulan Star Empire and the fledgling United Federation of Planets, so did the Klingon Defense Force’s structure and authority become more codified. Prior to this, its summoning was largely a matter of politics rather than necessity. But since encountering the Romulans, the Klingons have been confronted with a modern enemy requiring the marshalling of all their forces for warfare. 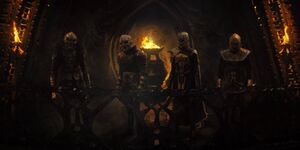 The KDF's position is as political as it is militaristic

The height of the KDF’s strength was long-considered the 23rd century, seeing multiple wars with the Federation and the Romulans. A treaty with the Romulans in the latter half of the century won the KDF an even greater prize than territory: cloaking device technology, which prompted a renaissance of Klingon military theory and practice. As this coincided with a rise in the power of the Chancellors and a strong central government, for many decades the KDF’s ships were more ubiquitous across borders and within the Empire itself than those of the Great Houses.

This saw a decline in the 24th century as the Great Houses asserted their own power. The weaknesses of the KDF’s structure - its reliance on those standing vassal fleets - were particularly highlighted in the Civil War of the 2360s, where Chancellor Gowron’s victory proved reliant upon the forces he could personally marshall, rather than the authority of his office.

This may have contributed to Gowron’s readiness to declare war on the Federation in the early 2370s, giving him just cause to unite Klingon fleets under the KDF and his authority, and win personal popularity among ship captains perhaps otherwise loyal to their Houses. It is likely also the reason he assumed personal command of the KDF during the Dominion War, making strategic choices undermining the popular then-General Martok, and precipitating the end of his Chancellorship. Such incidents demonstrate both the power and the fragility of the Klingon Defense Force, where a Chancellor may command every warrior of the Empire regardless of their house loyalties - so long as their personal honour is such that every warrior answers the call. 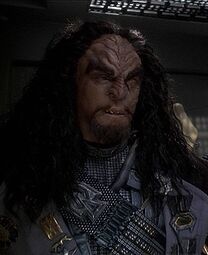 Chancellor Martok has long been popular in the KDF

The KDF has not been seriously mobilised since the Dominion War. In large part this has been to allow the Great Houses to rebuild their forces, but the internal Klingon conflicts such as the Sovereignty of Kahless’s insurgency also required different solutions. They were often best answered with regional responses by Great Houses, with support from the Chancellor.

Some Federation diplomats fear Martok could no longer assemble the full might of the KDF again without inciting opposition from his vassals, however. For long years he could rely upon his popularity as a military leader to command warriors through influence alone, but those victories are almost a quarter-century old. Martok himself is no longer young. While the KDF remains a stable and regular sight at Klingon borders and responding to Klingon problems, it is also considered a weathervane for the future of the Imperial Chancellorship: will it assemble if called? Or will a Chancellor not dare to try rather than attempt, fail, and show their own weakness?

All Klingon vessels originate as part of the military forces of their respective Great House, which may be called into service by the Klingon Defense Force. In practice, Great Houses often divide their forces between a semi-permanent contingent dedicated to the KDF, and others who may fall under the KDF in times of need. This can lead to some variety in the mentality and training of Klingon forces.

The Klingon Defense Force is led by the High Command, the most prestigious of all government departments. By tradition, it is led by the Chancellor of the Empire, who appoints the permanent staff of High Command. Great Houses expect to be represented in this leadership body, but the High Command is one of the most socially equal organisations of the Empire; sometimes it benefits a Chancellor to appoint generals of low birth who do not owe allegiance to any Great House.

When seconded to the KDF, Klingon warriors are expected to adhere to its chain of command. House allegiance is irrelevant, and the KDF is usually careful to make its hierarchy clear to avoid disagreement based on social authority. However, the KDF has a low tolerance for internal politics that disrupt its operations, and such conduct is seen as dishonourable to the Empire.

Larger vessels remain with Great Houses' fleets, mobilised by the KDF only in times of war

This is one of the two elements of the KDF. It consists of the regular forces of the Klingon Empire, comparable to Starfleet or the Romulan Navy, and is comprised of the combined navies of the Great Houses. As such, it is only assembled in times of war or specific threat.

While the KDF has absolute authority to recruit these ships, Chancellors or generals who could not justify the need have historically found themselves embroiled in political dispute. So long as the Empire needs its vessels, the Great Houses will submit willingly to the KDF. But a bolstering of forces to centralise power, or for a Chancellor to pursue their own interests or unpopular conflicts, has historically had an uphill climb against the Great Houses.

The ISF is the permanently staffed division of the KDF, also consisting of vessels seconded from house fleets. It is responsible for border patrol, customs enforcement, policing, anti-piracy, and so forth. It is often made up of smaller vessels such as Birds-of-Prey.

Most Klingon warriors enter service of the Great House to which they owe allegiance and may be assigned to ships on permanent or regular secondment to the Klingon Defense Force. Their training is conducted by their House, though ships which are for all intents and purposes ‘permanent’ fixtures of the KDF often train and drill together. 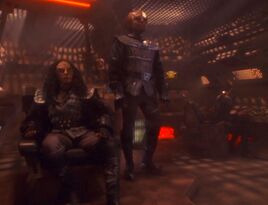 The bridge of a Klingon ship

Any unit seconded to the KDF for the first time also undergoes assessment by High Command, and it is considered a stain on the honour of the Great House if its warriors do not meet the expected standard. Similarly, officers selected by the Great Houses or who pass their entrance tests are ratified by the Oversight Council of the KDF regardless of assignment. Ostensibly this is to ensure their competence as potential KDF commanders, but in practice this is often a formality. These measures ensure uniformity of discipline, procedures, and competence across the ranks of all Klingon warriors, regardless of their origin or allegiance.

Where a Great House will often fill its command ranks with the sons and daughters of key families, the KDF has far fewer political pressures. As such, on ships regularly under the KDF’s authority such as within the ISF, birth is far less of an obstacle to progression than perhaps anywhere else in the Empire.

It is considered a great honour for one’s ship to be selected to join the KDF, especially not in war-time, as it is taken as a sign of approval from the greatest warriors of the High Command. This inspires a great esprit de corps among the Klingon Defense Force, encouraging unity despite inter-house politics and instilling great pride in their purpose. To serve the Klingon Defense Force is considered the ultimate purpose of the Klingon warrior, fighting for and alongside their people rather than in familial disputes.

This unity of purpose has resulted in a traditionally Klingon sense of discipline. The infamous obligation of a first officer to kill their captain if they are unable to perform their duties for any reason is a fine example; the mission and a warrior’s duty comes before any other loyalty. It is worth noting that, in practice, junior officers do not resolve disputes in such a way. They are more likely to lodge a challenge against a superior with the captain (or departmental head), who may choose when and how to resolve such a dispute.