Starfleet shipbuilding has gone through a number of distinct eras as new technologies and construction practices have emerged. These eras each have aesthetic and technological characteristics, seen through the classes of starship first introduced in each era. This article is written from a present (2399) perspective, and so some of the class designations referenced are different than those used in the period where the design was first used. 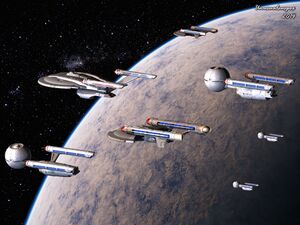 A Federation fleet in 2167, in orbit of a new colony world.

At the founding of the Federation in 2161, Starfleet inherited the bulk of Earth's Starfleet, consisting mainly of Daedalus and NX-class starships left over from the Earth-Romulan War. The Columbia-class of the mid-2160s was the first wholly-new Starfleet design and it served as the core of the young fleet, during the long design and construction process of the Bonaventure-class cruiser, which is the signature vessel of this era, her engine designs leading directly to the Constitution-class of the next century. This era saw relatively slow growth of the fleet, as the Federation got its footing as an interstellar power. 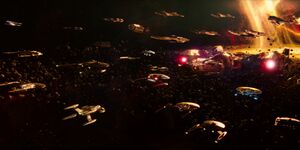 The fleet present at the Battle of the Binary stars, showing no fewer than eight Starfleet designs at once.

With the Federation's core security established and new members joining each year, Starfleet was forced to expand in the 2210's, with many new starship designs being introduced, starting with the Walker-class. This era would see the rapid introduction of new classes as new advancements were discovered, and by 2256, the fleet had twelve major starship classes in operation simultaneously, speaking to the different construction facilities they hailed from and experiments in starship design. This era saw a wide expansion of Federation territory (which caused notable tensions with its neighbors) and of the total number of member worlds, and so is often seen as a golden era for exploration.

The Constitution-class design was first produced in the 2240s, envisioned as an extremely rare and powerful design with a production run of only 12, until the 2270s when more were authorized. This design largely sat out the Federation-Klingon War of 2256-7, being seen as a weapon of last resort and last hope, should the unthinkable happen. The remainder of the fleet was devastated in this period, leading to standardization in the 2260s. 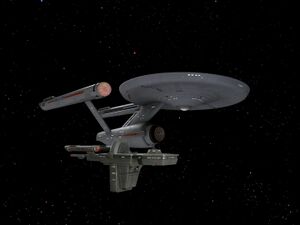 A Constitution-class heavy cruiser alongside an Antares-class surveyor, showing engine and deflector design standardization even at quite different scales.

Following the Federation-Klingon War of 2256-7, Starfleet embarked on a rebuilding program to restore the fleet to it's pre-war size. However, during this process it was discovered that there were simply far too many starship designs in service and more standardization was needed. Starfleet decided to base all future starship designs on the technology found within the Constitution-class heavy cruiser, which was by leaps and bounds the most powerful vessel then in service.

A program of standardization was created so that every ship of the line would have a nearly-identical layout to allow someone trained on a Constitution-class ship to easily find their way on any other ship built during this era, with the exceptions of the Antares-class surveyor (which did not have a primary hull at all) and the Federation-class dreadnought (which had a unique primary hull). Indeed, some hyper-advanced technologies such as holographic communicators were removed wholesale from the fleet, in favor of older, more reliable technologies.

This ethos resulted in the dismantling or reconfiguration of a number of starships built in the previous era, and left the fleet largely homogenous: white hulls with red markings, external deflector dishes, and standardized warp nacelles. The aesthetics of this era for many are synonymous with the Enterprise under James T. Kirk's command, and it remains one of the most iconic and storied time periods in Starfleet history. 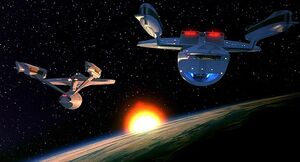 The USS Enterprise-A alongside the USS Excelsior, showing both the commonality and differences between their two classes. Their design aesthetics would dominate Starfleet for the next half century.

As with the previous era, Starfleet continued its preference for standardization in the 2270s. A new warp engine designed was pioneered aboard the USS Enterprise herself, which served as a model for the refit not only of her class but of the other classes built during the 2260s. This design would become ubiquitous not only for the remainder of the 23rd century but well into the 24th century aboard the Miranda and Constellation-class ships that it spawned. In this era, starship building reached new heights, with the very large Excelsior-class starship introduced with engines that further revolutionized space travel. Despite the success of Excelsior, there was not a second great reconfiguration in the works for Constitution-family starships, and so two generations of engine technology were produced at once, well into the 2330s, by which point the fleet consisted almost entirely of Excelsior, Miranda, and Oberth-class starships, with the Constellation-class and Centaur-class having limited runs of their own.

In this fifty-year period of relative peace and stability, Starfleet expanded to its largest-ever size, with the bulk of its fleet assigned to exploratory duties. Many colonies and starbases were established during this period as well, as the Federation expanded within its own borders. 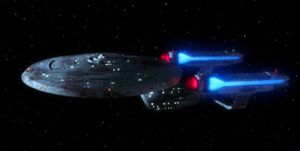 The USS Enterprise-C, showing battle damage during the Battle of Narendra III.

In the early 24th century, the Ambassador-class was introduced as the newest, largest heavy cruiser. This complex, advanced starship introduced a number of innovations including variable atmosphere quarters and phaser strips. It was by far the most effective exploratory platform ever developed, but it was never produced in large numbers due to its resource cost versus the Excelsior-class. A smaller derivative of the Ambassador-class was introduced as a scout: the Freedom-class, but it was also a limited production vessel.

In many ways, shipbuilding stagnated in these decades as Starfleet instead relied on older, proven designs. This was largely because the Federation had not seen sustained combat following the Tomed Incident in 2311. Relations with the Klingons, Romulans, and most other powers were stable, allowing the Federation to continue its successful exploration programs with the starships it already had on hand.

The Ambassador Era (a.k.a The Lost Era) In Play 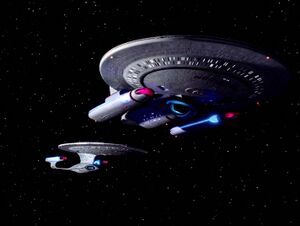 The USS Enterprise (background) and the USS Phoenix (foreground), starships built during this era.

By the 2350s, Starfleet was largely comprised of starships that were designed in the middle of the previous century, with the preference having been to continue large-scale production of the Miranda-class and Constellation-class designs which had their roots in the Constitution-class refit of the 2270s. Indeed, three separate generations of engine design (represented respectively by the Miranda and Oberth, Excelsior, and Ambassador-classes) were in production simultaneously. The Fleet Modernization Program was a concerted and centralized initiative, implemented to replace these aging vessels with new designs that incorporated the latest in defensive, scientific, and propulsion advances. This program was cut short following the Battle of Wolf 359, when it was realized that even these advances weren't enough in the face of an enemy like the Borg.

The Galaxy-class family in play 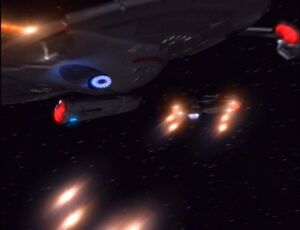 An example of two of the combat-oriented designs that entered production in this era: the Akira-class heavy cruiser/carrier and the Defiant-class escort.

Following the disastrous encounter with the Borg in 2367, Starfleet began a massive rebuilding and upgrade campaign to create a large number of combat-capable designs that could also fulfill Starfleet's primary exploratory and humanitarian missions. Unlike the previous shipbuilding campaign, these design programs were executed in a number of different initiatives. Generally speaking, the earliest four ships of this era are considered to be the Akira-class family, the Nova and Intrepid-class are a family, and the Sovereign and Prometheus-class are a family, with the remaining classes being one-off designs.

This has led to a return to a high level of fleet diversity not seen since the 2250s. What all of these designs share, however, is a far more combat-oriented approach to starship design. Even the Nova is studded with phaser arrays and has an armored hull. Three of the currently most-powerful starship designs were produced in this era, and it is said that weapons and shield technology made fifty-years worth of advancements in just these seven years of concerted defensive engineering.

Following the war, Starfleet was eager to return to its humanitarian and scientific programs, but it had not forgotten the lessons learned during the Dominion War. Ships of this era were well-armed but also geared towards exploration, especially the Luna-class explorer, which was intended to take up the five-year missions once completed by the legendary Constitution-class. Generally speaking, the designs of this era have more windows and more discrete armaments than Dominion War-era designs, while having smaller crews than those of the Galaxy family. Specifically, the Century-class explorer was developed as a longer range, more automated version of the Galaxy.

Shipbuilding priorities in the mid-2380s shifted towards vessels that could participate in the evacuation of the planet Romulus, and so the Odyssey-class (which was meant to debut in the early 2390s) was rushed into initial service, and so is counted here as a member of this era, but which didn't enter full service until the 2390s. 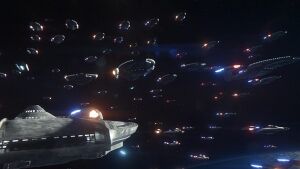 A fleet of Inquiry-class ships in orbit of Ghulion IV in 2399.

In 2385, the unthinkable happened: Utopia Planitia was destroyed in a surprise attack by rogue synth workers, which crippled the fleet's primary construction and repair facility. While shipyards could be found all over the Federation, the largest and most prestigious designs were built over Mars, and it was also the home to the Advanced Starship Design Bureau. In the wake of this attack, Starfleet turned inwards to shore up the Federations borders, anticipating further attacks and the chaos that would come with the destabilization of the Romulan Star Empire. With the loss of the facility most experienced in building large starships, the ships produced in this era tended to be of small or medium size, and were once again biased towards defensive abilities, the most notable being the mass-produced Inquiry-class multirole heavy cruiser. True successors to the Miranda and Excelsior were introduced in this era, providing well-rounded generalist abilities, alongside hardened EPS conduits and mounts for heavy weapons, should war ever break out again, and this design choice is emblematic of this era. The Vesta-class, the newest explorer-class starship as of 2399, was introduced in this era and follows this design philosophy, too: bleeding-edge engines, sensors, and labs, alongside heavy weaponry and an armored hull.

In 2399, Starfleet turned once again to the stars, and starship building priorities were expanded to include more of the exploration-oriented designs of previous eras, with the Vesta, Century, and Odyssey all entering full production alongside the Sovereign. It's too early to speculate what designs might emerge in this era, but it's safe to say that Starfleet will once again create new designs to meet this new moment.