The Archanis Sector is a region lying on the border between the United Federation of Planets and the Klingon Empire. While historically ownership of the sector has been contested, it has been largely in Federation hands since the mid-23rd century. With proximity to the Orion Colonies, it is a diverse border region that has been left to largely independent governance with minimal Federation oversight in recent decades.

In mid-2399, Federation space experienced an unprecedented wave of raids orchestrated by the Klingon dissidents, the Hunters of D'Ghor. In response, Starfleet dispatched the Fourth Fleet to protect and rebuild the region, and drive out the Hunters.

The Archanis Sector has never been fully held by either the Federation or the Klingon Empire. It was one of the first locations where the border of the two powers met, and the most coreward of its Federation colonies date back to the earliest years of the Federation's founding. The sector was largely divided between them for the next century, until the outbreak of the Klingon-Federation War of the 2250s. During this period, the Empire overran and annexed the sector. Those seized territories were relinquished at the war's end, and over the next decades of unsteady peace between both powers, the more and more territory was ceded in negotiations to the Federation. During this time, Starfleet established and maintained a significant defensive front in the sector.

The next century, however, was largely peaceful between the Federation and the Empire. Colonies prospered, Starfleet's defensive holdings received fewer resources, and trade flourished. But the Empire's historic claim on the region was invoked in 2372 by Chancellor Gowron, demanding the Federation cede all worlds. The Federation's refusal, and the Empire's subsequent invasion and rapid annexation of the whole sector, triggered the Federation-Klingon War of the 2370s. The Klingons were eventually repelled, and any remaining opposition withdrew upon the re-establishment of the Khitomer Accords and the outbreak of the Dominion War.

Since then, the region has returned to peace. With the Federation and Empire enjoying unprecedented closeness in their relations, commerce and diplomacy bring significant bounties to the region. While the Federation and Starfleet's withdrawal of resources from their borders to protect and support the Core Worlds affected Archanis, the self-sufficient of the colonists left them standing strong. It has, however, allowed an independent streak to thrive, many colonies finding the Federation irrelevant, or even an impediment, to their everyday lives.

The assault of the Hunters of D'Ghor has brought fresh chaos to Archanis. The indiscriminate raiding and attacks on colonies and the region's inhabitants has threatened to lay waste to the sector. While Starfleet will likely prevail in driving the D'Ghor off, the rebuilding work will doubtless prove extensive.

Archanis is an inhabited system, with most settlements on Archanis IV. One of the earliest Federation settlements in the region, it has been one of the most hotly-contested worlds in conflicts with the Klingon Empire. 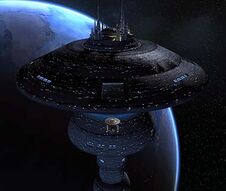 With Starfleet's reduced presence in the Archanis Sector, the coreward Starbase 27 has become the hub of all local Starfleet operations. An ageing Spacedock-class station, it is the home to Task Force 27, the local Starfleet border protection largely consisting of small or similarly last-generation starships. With its distance from the border itself, it remains a safe and secure location along the main transport routes towards the Federation core.

This cluster of star systems is one of the most densely inhabited regions of the Archanis Sector, with a closely-interknit economic and social infrastructure. In early 2399, a fungal disease afflicted local crops and spread rapidly, threatening agricultural enterprise and the cluster's ability to sustain itself. This calamity left the ensuing D'Ghor raids on the cluster particularly devastating.

Ayer's Rock is a dry but habitable little rock on the Federation/Klingon border. Colonist here prefer to eschew the use of modern technology, sticking with more muscle power for the most part, with the occasional bit of wind and water. More advanced technology does exist, such as a shuttle for the single real hospital on the planet, and a few transmitters here and there, but most people avoid them. Ayer's Rock is also home to a passive only subspace listening array put together by the orion privateer Sidda and a local for listening to comms traffic in the sector while being well hidden. The largest town is Landing.

A prosperous colony, Kyban sports multiple large cities and settlements. The largest city, Banksy City, boasts a population of three million Federation citizens and features a multitude of cultural highlights. The world does maintain a self defence force and nominal orbital defensive systems.

Former wildcat mining operations turned attempted legitimate colony, this marginally habitable class L world has suffered at the hands of the House of D'Ghor. There were no survivors when the colony was hit.

The Elgatis Belt, a rich source of uridium in the sector

Home to one of the largest sources of uridium in the region, the Elgatis Asteroid Belt is home to the Elgatis Refinery, an extensive mining and refining operation, and a significant hub of local trade.