Starfleet Academy is Starfleet’s in-house university, intended to train officers to join Starfleet. A part of Starfleet Training Command, this institution spans multiple campuses across Federation space, educating tens of thousands of cadets each year. The original flagship campus is located on Earth in San Francisco, within walking distance of Starfleet Command.

Admission to Starfleet Academy is exceptionally competitive, with academics, physical fitness, life experience, aptitude, and character references all being considered in the initial application process. Even after an applicant is selected, they must go through an entrance examination, which includes intense psychological scrutiny, exams covering a wide range of subject areas, and in-person interviews. Applicants not scoring high enough to attain admission but above a certain range are allowed to take the exam again after twelve months have passed.

Non-Federation citizens are allowed to apply to the academy with the sponsorship of a command-grade officer. Unlike citizens, however, they were required to complete the Starfleet Academy Preparatory Program (SAPP), which was six weeks of classes set between the San Francisco campus's spring and fall semesters. This is an intensive, grueling experience with a high attrition rate. If the applicant successfully completes the program, they are then able to take the entrance examination itself.

Some secondary schools within the Federation also offer the Starfleet Academy Preparatory Program, allowing students to prepare themselves for the entrance examination while still in high school or its equivalent. 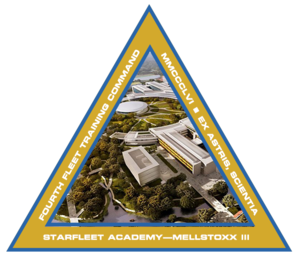 Starfleet Academy’s main campus is located in San Francisco, California on Earth. Originally formed to serve the nascent Earth Starfleet in the 22nd century, it became the primary training facility for the Federation Starfleet in 2161. To this day, the vast majority of cadets across the Starfleet Academy system spent at least a few weeks here, and many spend at least a year on its perfectly-manicured grounds.

On Earth and within the Sol system there are dozens of subsidiary facilities, ranging from flight ranges, to zero gee training grounds, to faculties specializing in particular areas of academia. In addition to these local facilities, nearly every Federation member world has a campus of some size, as do older colonies. This allows the Academy to handle its massive student population, which is steady between a quarter million and a half million students at any one time, depending on Starfleet's recruitment and staffing needs. While this is massive when it comes to the scope of an academic institution, but it is miniscule compared to the hundreds of billions of beings living on Federation worlds.

While all Starfleet Academy campuses follow a single, unified curriculum, they can differ in terms of how long it takes to complete a program based on the cultural traditions concerning academics of their host planet: for example, ‘summer breaks’ are a North American tradition in higher education, so some planets do not have them. Others break the academic year into three or four parts, rather than into two parts. This variation is considered desirable, both to offer different schedules for individuals’ preferences, but also because it results in new officers being commissioned at many different dates throughout the year, keeping a constant stream of new officers flowing into the fleet.

All of the numbered fleets have a subsidiary campus that funnels new officers to its stations and starships. Cadets are often transferred to these academies in their second or third year from the main campus, when their talents are identified to align with that fleet's staffing needs. The Fourth Fleet's primary training facility is located at Mellstoxx III, and this is the subsidiary campus that provides this fleet with the majority of its new officers. In fact, officers earmarked to join this fleet invariably spend at least a few months here, or go through command school here.

The time it takes to complete a particular program at Starfleet Academy depends on several factors, ranging from the individual’s age and prior experience to which campus it’s being taken on to the program itself. Generally, it takes four years to graduate from most programs as an Ensign with a bachelor’s degree. Specialized programs such as medicine and counseling take an additional two or four years. In addition, individuals may opt to spend longer at the academy to pursue a master’s or doctoral degree, especially in the sciences.

While cadets wear the branch color of either Command, Engineering, or Sciences during their time at the academy based on their intended career path, they receive degrees in an academic area during their time there. All cadets receive training in starship operations and self-defense, alongside a rigorous core curriculum of science, history, mathematics, and the arts, to become well-rounded critical thinkers. Cadets declare both a major (and possibly a minor or additional major(s)) and a career path, which informs how they pass through the academy.

Everyone graduating through Starfleet Academy’s traditional four-year program earns a Bachelor of Science (BS) degree. These degrees are always in an academic discipline, rather than just in a branch of Starfleet or in a position. Starfleet Academy also offers masters and doctoral programs in most of its academic areas.

Starfleet Medical Academy offers medical doctorates, research doctorates in medical fields, and advanced degrees in fields like public health and nursing. Many new MDs also complete residencies, which do not earn a further degree but do grant additional qualifications.

Cadets in a traditional four-year program will spend most of their first two years going through the core curriculum, with their second two years spent specializing. Interspersed throughout classroom studies are practical excursions, such as survival training, zero-gee training, and the all-important cadet cruises performed on actual starships. Ensigns who graduate in this manner are qualified to serve as bridge officers immediately upon their commissioning without taking the Bridge Officer’s Exam, as this is built into the program.

Some programs, including nursing, and interstellar relations where the academic requirements are too rigorous to allow for completion of both advanced starship operations and their discipline's requirements within four years. Cadets in these programs take just one year of general education and basic starship operations, followed by three intensive years in their discipline. This is also an option for cadets in other areas who wish to add another major or minor while completing their degree. Cadets who take this path must take the Bridge Officer’s Exam later in their career to qualify for bridge duty and be eligible for promotion beyond the rank of lieutenant commander.

Medicine, counseling, and the law have two options: an accelerated six-year track which allows them to earn a bachelor's degree and a master's or professional doctorate at the same time without bridge officer qualification, and an eight-year track with the two degrees earned separately, with or without bridge officer qualification, depending on their career path. A law student, for instance, might find it useful in their future role advocating for Starfleet officers to be fully qualified for bridge duty, while a physician might take on a xenobiology major alongside their pre-medical studies in preparation for studying xeno-medicine. A counselor would take the eight year path to become a psychiatrist, and thus a medical doctor. Counselors, Judge-Advocates, and Doctors end their studies as Lieutenants Junior Grade, with the eight year track including an initial commission as an Ensign before professional school.

Whether you're meant to be a records officer or a captain, every graduate of Starfleet Academy receives at least basic training in starship operations. No one graduates from the academy without ever having been in space, and graduates of traditional four-year bridge officer programs are among the most capable starship crew members of any power in the Alpha or Beta Quadrants. This training includes wilderness survival, zero-gee training, basic flight control, and self-defense training, all of which is expected beyond any academic program a cadet might be engaged in.

All cadets are part of a training squadron while at Starfleet Academy. Despite the name, this is not a reference to them needing to be pilots necessarily, but is a hold-over from earlier Academy structures on a number of Federation worlds. Typically, a cadet will remain with the same squadron for their entire tenure at Starfleet Academy, and squadrons generally include members of all four cadet ranks. Squadrons are typically made up of between 48 and 64 cadets, overseen by a senior cadet who is mentored by a command-grade officer ranked between Lieutenant Commander and Captain.

Training squadrons are the locus of most of the training in survival, self-defense, leadership, and discipline at Starfleet Academy. These units function as self-contained residential groups as well, with cadets in the same squadron living, working, and eating together. Mentorships naturally occur and more senior cadets are encouraged to take more junior ones under their wings, which is meant to set up that same behavior within the fleet itself.

There are a number of elite training squadrons for cadets in different areas:

In addition, numbered fleets maintain training squadrons at the academies that service them. Notably:

Every cadet at Starfleet Academy undergoes at lease one cadet cruise on one of the Academy's training vessels, either following their third or fourth year. While aboard a training vessel, cadets are known as midshipmen and stand in the place of regular officers. The most advanced cadets serve as department heads, while the rest of their class fill in roles all over the ship, with commissioned officers overseeing them the entire time. These cruises last for several weeks at a time, as cadets get accustomed to life aboard a starship and practice practical skills that can't be simulated in a classroom. Without exception, training cruises are commanded by Starfleet captains.

Starfleet Academy employs a number of different training vessels, the most famous being the USS Republic. Subsidiary campuses either have their own training vessel or have active service starships stand in temporarily. The Mellstoxx III campus which serves the Fourth Fleet, for example, has the USS Exeter at its disposal.

Members of specialized training squadrons or who demonstrate particular promise might spend a cadet cruise aboard an active service starship.

The Federation has tens of thousands of colleges and universities. For Federation citizens interested in joining Starfleet after completing a degree elsewhere, they can either enlist directly or go through Officer Training School, which is a one-year program offered at most academy campuses. This program prepares candidates for spaceflight, through a combination of the basic survival and emergency procedures training offered by Basic Training and some of the leadership training that cadets get. Completion of this program would allow a member to enter the fleet as an Ensign or Lieutenant Junior Grade, depending on their prior experience and education. (Generally speaking, physicians and lawyers would enter at the higher rank.)

Entry to this program has the same standards as entry to Starfleet Academy itself, with rigorous expectations for physical fitness and intellectual capability, to ensure that officers entering the fleet via this route are just as well-prepared as those going through the Academy itself. Generally, this route is most common for scientists, physicians, lawyers, and diplomats, and the officers who graduate from Officer Candidate School are usually not bridge qualified, but individuals with degrees in astronautics, small group tactics, or similar fields can become flight control, security, or operations officers.