The Vidiian Sodality is the interstellar power of the Vidiian species, and one of the most powerful, and notorious, factions in the Nacene Reach. Once considered a culturally-advanced species boasting fine arts and music, the Vidiians have been afflicted by a terrible plague known as the Phage for almost two millennia. As this disease has become more widespread, their society has become more desperate and inhumane in its methods of survival, and they have resorted to organ harvesting and biological piracy to preserve their species, earning them the ire and fear of their neighbours.

The Think Tank once claimed to have cured the Phage. If this was true, the cost for the cure was either too high/insurmountable (even by Vidiian standards), the cure was ineffective/temporary, or only distributed to a small section of the Vidiian population.

The Vidiian Sodality has existed since antiquity, in some form or another, but now exists as a near-autocratic state controlled by the medical professionals of the Vidiian species, who occupy the leadership roles of nearly every level of their society. Managed through a ruling council of physicians and surgeons, dedicated to the survival of their kind and the pursuit of a cure for the Phage, the council's rule, and that of its regional subsidiaries', is almost absolute, as increasingly significant kerbs on liberties are enforced to manage the inevitable spread of the disease.

Significant autonomy is, however, afforded to the various bases in, and vessels marauding around, Vidiian space and the Nacene Reach.

The Vidiian Sodality is one of the most advanced factions in the Nacene Reach, and even boasts medical technology more advanced than that of Starfleet. This is a direct result of the Phage's influence on their society; they have been forced to advance their medical understanding far beyond their compatriots, in an effort to prolong the lives of their citizens and, ideally, cure themselves of the disease.

Like many of the species in the Nacene Reach, the Vidiians do not have access to standard transportation technology that can be used for the movement of complex life-forms. They do, however, have specialist matter technology that is capable of identifying healthy and Vidiian-compatible organs/tissue in other species and transplanting them directly from a living host. This macabre technology is often employed as a weapon and medical scanner. Nearly all Vidiians encountered beyond their worlds is equipped with one. One of their most remarkable technologies has allowed them to separate, for example, a hybrid species into their constituent parts, effectively creating two separate individuals.

Vidiians have developed effective forcefield technologies, as well as the ability to cloak the appearance and detection of such forcefields, which is often applied in settings to allow them to observe, abuse and experiment on other species.

Their starships' propulsion, weapon and defensive systems are comparable to Starfleet's, with hyperthermic charges being a prime example of their starships' armaments.

They are known to strip captured vessels of their technology and equipment, much like they do the organs, although they are not a resource-poor faction.

The Vidiians structure their entire society around the Phage, separated those afflicted from the healthy. Revering their physicians and holding them in the highest regard, ultimately being led by them, the Vidiians have strict laws governing social gatherings, distancing and the pursuit of health. The government has strict control over the day-to-day lives of Vidiians, healthy and unhealthy, in their efforts to restore their health and original society, and this has led to a willingness/expectation of all citizens to sacrifice themselves for the greater good, should this be necessary.

Having once been celebrated for their music, arts and culture, renowned as accomplished explorers, diplomats and scientists, their age of discovery has been entirely subsumed by their affliction and crumbling society and population. All resources are dedicated to seeking a cure for the Phage and the preservation of their species by almost any means. Those willing to explore space to capture and harvest organic resources are respected by the Vidiian people, and are nearly always comprised of the afflicted; it is less costly to lose an ill wanderer, than to potentially sacrifice a selection of healthy subjects.

Aside from a dark willingness to assault, capture and dissect other species, utilising abhorrent technologies and tactics akin to piracy, the Vidiians are not actually naturally predisposed towards violence, any more than humans, and have shown a deeper willingness to open dialogues with other species and form partnerships, although they have grown mistrustful and cynical (largely from their own actions). It is reasonable to assume that, cured of the Phage, the Vidiians could just as easily be a force for good, as much as they are currently a force of self-interest.

Continuous organ transplantation has led to the Phage-infected Vidiians having a wide variety of alien organs and skin on their body, resulting in a hideous appearance. When uninfected with the Phage, the Vidiians have a standard humanoid appearance. The Vidiians' facial appearance is similar to that of a human with two eyes, a nose and a mouth, but they also possess a swept-back hairline and a slightly enlarged forehead with no eyebrows. There is a slight ridge that runs from the hairline down the centre of the forehead to the top of the nose. Their organs are comparable to most 'standard' humanoids'. Whilst the Phage is virulent in the Vidiians and less contagious to other species, it is not a purely Vidiian ailment and can be transmitted, although usually through more direct means, to non-Vidiians. 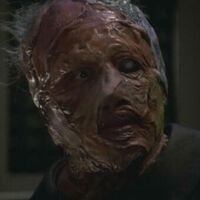 The Vidiians in Play