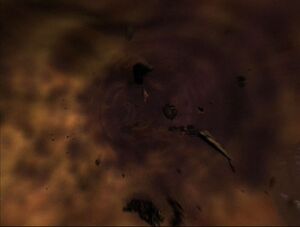 The corridors of the Underspace are dangerous to traverse

The Underspace is a network of subspace corridors extending through large reaches of the Delta Quadrant, allowing swift travel across vast distances. Its use is largely controlled by the Turei Alliance, who have granted Starfleet limited access.

The first known users of the Underspace were the Vaadwaur prior to the 15th century. With a reach as far as Talaxian territory, they used the Underspace for trade, exploration, raiding, and expansion, but kept no written records of the phenomenon. When the Vaadwaur were defeated by the Turei and their allies, this understanding and knowledge were lost.

Since then, the Underspace fell broadly into the hands of the Turei. Despite their limited knowledge, they guarded use of the phenomenon jealously, driving out interlopers. One such encounter was with the USS Voyager, who stumbled upon the Underspace by accident and was subsequently instructed to delete from their databanks all evidence of its existence. Despite this fraught first contact, the Starfleet crew ultimately assisted the Turei against a militant group of surviving Vaadwaur, who fled into the Underspace.

This tenuous agreement paved the way for future cooperation between Starfleet and the Turei. In 2399, the Federation formed an agreement that included not only joint operations in the Gradin Belt but limited use of the Underspace for Starfleet ships. 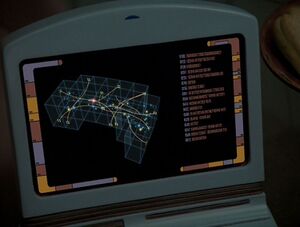 Understanding of the Underspace remains limited

The Turei are familiar with multiple access points to the Underspace in the Gradin Belt, though their knowledge of exits further afield is much more limited. Starfleet has loosely charted routes to the Swallow Nebula, the Nacene Reach, and the Nekrit Expanse, allowing ships to travel to the Delta Quadrant through the Barzan Wormhole and from there proceed across the quadrant.

However, understanding of the Underspace remains limited and much knowledge was lost with the fall of the Vaadwuar. Just as ships have fallen accidentally into the corridors, some have tumbled out before reaching their exits and been left stranded, unable to regain access. Underspace corridors are dotted with the debris of ships lost within, making travel even more dangerous. Travel through the Underspace is not undertaken lightly.

A further restriction comes from Starfleet’s agreement with the Turei. Keen to maintain control of the Underspace, and especially to keep it from the hands of the remaining Vaadwaur, the Turei have not granted the Federation unrestricted access. Starfleet missions through the Underspace must be planned and proposed, demonstrating their necessity before the Turei will provide their essential aid. While the Turei have shown little interest in using this power to influence Starfleet operations, their oversight has limited use of the Underspace to only the most valuable and necessary of missions.