The Tzenkethi Coalition are a major government of the Alpha Quadrant about whom the Federation knows little despite sharing a border. With a highly stratified society ruled over by the absolute power of the Autarch, the term ‘coalition’ refers less to a union of smaller state actors than their sense of all-for-one civic behaviour.

The Tzenkethi achieved interstellar travel in the mid-21st century, establishing footholds and colonies on multiple nearby worlds. It was these expeditions and outer settlements that were encountered by the Cardassian Union, who found them easy to dominate, capture, and sell into slavery. Accustomed to a strictly hierarchical existence, individual Tzenkethi made excellent chattel slaves that were eager to please their owners. For many Alpha Quadrant species, these slaves were the first Tzenkethi ever met as they were shipped and traded to distant markets.

The Cardassian Union sought to exploit what they saw as weakness and launched an invasion to conquer and occupy the Coalition’s worlds, including the homeworld Ab-Tzenketh. They found attacking individual Tzenkethi very different to striking against the Coalition as a whole, however; an individual Tzenkethi might accept subjugation by a more powerful being, but the society would not surrender its hierarchy or identity. United in a way that had never been encountered before, the Coalition repelled the forces and defeated the invasion attempt.

This led to a policy of extremely xenophobic isolation, as the Coalition deemed all other species as irrelevant to their society, or a threat. Even diplomatic overtures from the Federation at first contact were met with rejection, leading to a perpetual state of uneasy tension along the border as the Federation settled nearby worlds.

In the mid-24th century, the Coalition claimed the Federation had settled worlds of high importance to them. Without any formal agreements or delineation of power established between the governments, there was no means for the Federation to ascertain the legitimacy of their claims, and a brief but vicious war was waged. This ended with the defeat of the Tzenkethi Coalition, and the reinforcement of the Federation border.

For much of the past fifty years, the Tzenkethi Coalition has remained politically isolated. However, their lack of care for other races or governments renders them viciously opportunistic. Any weakness from their neighbours are set upon, the dregs of their society launching raids for technology and resources. These seem tantamount to piracy, but appear to have the support of the Autarch.

The Coalition appears to have closely watched the recent raids by the Breen Confederacy against the Federation, with many of their raiders poised to exploit the chaos to their own ends. 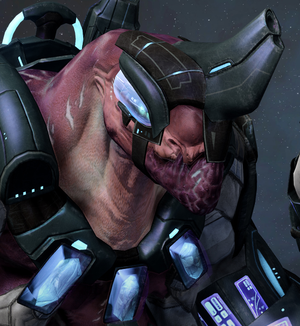 The Tzenkethi live in a highly stratified society

Tzenkethi live in a highly stratified society where every individual is placed into an ‘Echelon.’ Akin to a caste system, a Tzenkethi’s Echelon defines their societal role, what job they may hold, and how far they can advance within society. They are further defined within their Echelon by their job, and how well they perform it. Ranks within a job range from AA (the best) to EE (the worst). Those deemed to have failed at their jobs are given the rank of 0 and are forbidden from reproducing.

A Tzenkethi’s Echelon is selected when they are tested as a fetus, without influence from their parents’ job, Echelon, or nature. This often results in children being separated from their parents as they are raised in the Echelon they have tested into. However, this selection is not absolute; a Tzenkethi is again tested at least twice per year and may move Echelon if they show potential or work hard.

Echelons relate to different roles and the hierarchy between them is strict, albeit defined by the needs of Tzenkethi society, about which little is known or understood. It is known members of lower Echelons may only speak to those of higher Echelons with permission, with permission sought and granted through complex hand gestures. This hierarchy is considered a natural law, beyond question.

Understanding the Echelons is key to understanding Tzenkethi interactions with other species. In early encounters, races such as the Cardassians were assumed to be worthy of their authority because they enforced it without question. To the Tzenkethi, this conduct was comparable to how the highest leaders in the highest Echelons act within the Coalition, and so those who met the Cardassians, often lower-level workers, responded to this authority with subservience. This was why those Tzenkethi were easily captured and enslaved, unable to comprehend that they had not simply met alien societies with ruling Echelons higher than their own.

That the Cardassian Union dared strike against Ab-Tzenketh and the Autarch overturned this. These outsiders were not other Echelons that could interact and align with Tzenkethi society, but aberrations stood against the natural order. The Tzenkethi were forced to contemplate a new position within their hierarchy, placing all alien life as worse than the lowest-ranked Tzenkethi, worthless to civilised society if not a threat to it.

This informs much of their interactions with other species, as the Tzenkethi essentially do not recognise them as people. Their wants and needs, their laws, their interests, are all either irrelevant or a danger. The legitimacy of the Federation worlds to which they laid claim in the Federation-Tzenkethi War is unknowable; either the Tzenkethi did not communicate that they had always viewed those systems as within their border because they did not contemplate such diplomatic engagement, or their desire for the worlds was indeed new and the Federation’s desires were immaterial.

The only species with which the Tzenkethi have reliably engaged are the Ferengi Alliance, who were met not long after the Cardassian Union but never participated in the slave trade. This meant trade between the Coalition and the Alliance happened before the Tzenkethi had solidified their stance towards alien life, and the Ferengi - while exploitative - never sought to subjugate the Tzenkethi, instead being viewed by the Coalition as an external trading Echelon. While the Coalition became isolated after their defeat of the Cardassian invasion and relations with the Ferengi cooled, they did not close off commerce entirely. The Ferengi have proved cunning enough to continue to act in a way the Tzenkethi find palatable and keep trade routes open. For the Tzenkethi, the Ferengi are an exception - they have no place among the Echelons but are considered more akin to the lowest of their society. They are, however, always one misstep away from becoming just as unwelcome to the Tzenkethi.

The Autarch stands at the highest level of the highest Echelon of Tzenkethi society. They are not only the leader of the Coalition, but are worshipped almost as a deity in a society with no formal religion. Their name is praised daily by every Tzenkethi, who motions to the heavens in thanks for their benevolent leadership. This is more than a symbolic gesture, as the Autarch resides on one of the moons of Ab-Tzenketh, so they may always look down on their people.

With absolute power, the Autarch has authority over every facet of life of every Tzenkethi, with say over their lives and their deaths. This privilege and power does come with the expectation, however, that the Autarch will keep the Tzenkethi people safe from outside threats, and Autarchs who have failed to do so have found themselves falling in rank or even Echelon. While they sit at the head of their stratified society, they are still bound by its structures.

The Tzenkethi are a reptilian species, with dragon-like heads, rhino-like skin, and four arms. Two are powerful, reserved for fighting and feats of strength, while the others are more nimble for precision work; all are hyper-flexible, allowing for swift and fluid movement. Their backs have a set of bony arches, making them even more resilient. They have a wide range of skin tones, from deep blues to bright pinks, which grow darker and more vibrant with age.

Little is known of their internal biology. Their internal structures are filled with small, fluid-filled sacs that give them slow-acting regenerative properties. If too many are punctured before this regeneration can act, they may bleed out in seconds. But it is difficult to injure a Tzenkethi so seriously, and if they can weather the initial wound, their natural defences will see them nearly fighting fit again very swiftly. 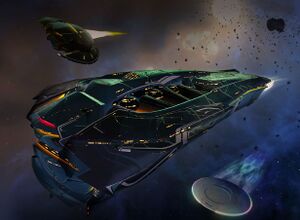 Tzenkethi ships are highly resilient, with particularly powerful shield systems and armaments. To balance such competing demands, they build vessels with highly localised, front-facing weaponry emplacements. This makes for large and powerful vessels that are devastating in frontal assaults and charges.

By their nature, the Tzenkethi military has a high level of cohesion; it’s in their nature. This is supported by designs in their larger ships and command cruisers, which tend to operate closely together with others to share targeting data and strategic processing, and even share shield systems. Their personnel have the discipline to make this possible and effective, and the Tzenkethi are resolute in enacting even complex battle-plans of many disparate elements.

They are not without their weaknesses; while the fronts of their ships are heavily armed, their forward shield power is weaker, and the worst of their firing arcs can be evaded by more manoeuvrable ships (who will still have to contend with well-defended lines of potential assault). While Tzenkethi forces are efficient and disciplined, they are not especially flexible to changing situations. Some of their commanders have demonstrated tactical brilliance which is then conveyed to their forces with lightning response, but disruptions to those chains of command and especially the destruction of command cruisers has proved devastating to the Coalition navy.

In practice, the Tzenkethi Coalition rarely brings their navy to bear against anything but invading forces or formal warfare. However, the lowest members of their society may prove their worth by taking to a life of raiding and piracy. Acting at the direction of the Autarch, they make forays into enemy territory to seize resources and technology, often striking opportunistically and without regard for civilian lives or the norms of warfare. While these raiding vessels are less powerful and lack the strict cohesion of the Tzenkethi military, their callous disregard for the personhood of non-Tzenkethi and hunger to prove themselves to their own society makes them exceptionally dangerous if they identify a target.