The Sutherland-class research cruiser is a large science vessel derived from the Nebula-class heavy cruiser. It is intended to carry large-scale instruments into the field with large crews of scientific personnel; it is by far the largest dedicated science vessel in service. Compared to the Nebula, many of its exterior features have been simplified and it is more lightly armed. These vessels can mainly be found making use of their vast scientific and research capabilities to perform extremely detailed studies of planets, celestial phenomena, anomalies, and entire regions of space.

While rarely being deployed at a long enough range to be on the truly cutting edge of space exploration, the Sutherland excels at the follow-up. Fully customizable sensor palettes are designed to house a comprehensive suite of Starfleet’s most advanced particle detection technology. From quarks to chronitons, photons to quantum filaments; if it’s there, the Sutherland will sniff it out. As a result, the geo-imaging, cartographic, and data collection capabilities of this class of ship are second to none.

Like its predecessor, the large internal volume of the Sutherland makes it something of a “mobile starbase” in terms of scientific output. Extensive laboratory complexes and specialist analytical facilities are networked with bio-neural computing power measuring in yottaFLOPS. Again, like the Nebula, there exists a large amount of vacant internal space available for upgrades, mission-specific equipment, and anything else that might be considered necessary for the wide variety of missions a Sutherland-class vessel might find itself assigned to.

With a detachment of five runabouts and fourteen shuttlecraft, the Sutherland has all it needs to act as a temporary base of operations for smaller manned missions. These range from observation of stellar phenomena from different vantage points to collection and cataloging of bio-specimens during planetary surveys. Resources also exist aboard the Sutherland for the transportation of industrial replimat components planetside. While large, these replimats are limited to the production of field hospitals, emergency shelters, “duck blinds” and research outposts. The construction of any larger structures remains beyond the scope of a single vessel.

The sheer size and complexity of the scientific systems aboard the Sutherland have limited its ability to carry out long-range independent operations. Although internal space and mission pods can be used for extra deuterium storage, the colossal energy requirements of maintaining the Sutherland’s scientific and computational prowess make its deployment to very far-flung regions of the galaxy both unlikely and inefficient. Starfleet has instead commissioned these ships to operate as massive mobile data collection platforms, regularly returning to a starbase to disseminate information and take on new mission-critical modules, materiel, and personnel.

The size of the Sutherland makes it a viable option for hosting diplomatic functions and conferences and transporting large groups of dignitaries between destinations within Federation space. Such meetings and events often form part of Starfleet’s obligations under research sharing agreements negotiated between the Federation and other galactic powers. In such cases, the Sutherland may well find itself traveling beyond Federation borders in the name of scientific cooperation.

Humanitarian aid is an area in which the Sutherland excels. Reconfigurable space throughout the ship, along with mission pods containing hospital facilities, storage, and emergency shelters, allow the Sutherland to assist with a whole host of mission types in this arena. Planetary evacuations, contagions, natural disasters, and famine relief are all scenarios in which the Sutherland would be a capable responder.

It is uncommon, but not unheard of for ships of the Sutherland to engage in first contact missions. The most likely scenario here would be following on from initial discoveries made by scout ships without the means to establish meaningful diplomatic connections alone, such as Nova or Rhode Island-class vessels. More likely would be the involvement of the Sutherland with second contact missions with civilizations known to be peaceful, possessing similar cultural interests to the Federation. In this situation, the Sutherland acts as an ideal showcase of Federation science and research technology. 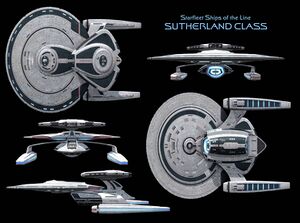 Orthographic views of a Sutherland-class cruiser.

The Sutherland’s similar configuration to the Nebula is where the similarities end. The matching profiles of the two classes belie the fact that every major component of the Sutherland has been designed from scratch. The ship is outfitted with state-of-the-art systems ready for service well into, and potentially even beyond the 25th Century.

The warp core aboard the Sutherland-class is robust; powerful enough to provide for the needs of sprawling bio-neural computing nodes, subatomic spectral analysis modules, and other starbase-level tools. This has, however, limited the ship’s cruising speed to warp 7. A sprinting speed of warp 9 also means that the Sutherland might not be the first ship in a given region to reach the site of an incident.

Extensive hangar space provides ample space for the Sutherland’s compliment of shuttles and runabouts. The largest of these, housing the majority of the support craft, can be found at the stern of the ship. A second auxiliary bay is located to the rear of the saucer section beneath the mission pod’s overhang. Cargo space also abounds, further highlighting the ship’s usefulness in emergency supply or evacuation missions. Twenty cargo bays can also be found lining either side of the rear ventral saucer section and twenty more are positioned on the underside of the secondary hull. All cargo bays have doors opening directly into space for direct resupply of bulky goods while docked.

Like the Nebula before it, the Sutherland-class is able to separate its primary and secondary hulls. Unlike its predecessor, however, the Sutherland saucer section is furnished with two small integral warp nacelles located directly under the impulse engines. These allow the saucer section to independently achieve a cruising speed of warp six. As a result, the Sutherland has a considerable advantage in the study of large stellar bodies such as nebulae or subspace rifts, which may stretch for light-years across multiple sectors of space. Data triangulation, sample collection, and signal testing can all be achieved to a far more comprehensive degree than if undertaken with probes and support craft. Saucer separation may also be considered before proceeding toward areas of space or stellar phenomena that pose a risk to the ship's safety. Of course, captains may also wish to evacuate civilians and families via saucer separation in anticipation of tactical engagement.

When placed into a combat situation, the Sutherland-class might be considered somewhat cumbersome from a tactical perspective. Nevertheless, four type XII phaser arrays allow the ship to defend itself adequately from potential harassment by smaller hostile vessels. The hull itself does not have any torpedo launchers and must rely on these to be provided by its mission pod. In its default configuration, the sensor pod comes standard with two forward and two aft probe launchers, which can also be used for torpedoes. They fire more slowly and have a smaller magazine than the launchers on combat-oriented starships. Compared to smaller science vessels like the Grissom-class surveyor, however, the Sutherland has much more powerful shielding and can drive off most light attacks on its own.

If deployed as part of a Starfleet battle group a Sutherland would be placed in a forward reconnaissance position, taking advantage of its long-range sensor capabilities. In such a situation, group commanders would be careful not to position the Sutherland too far beyond friendly forces as to risk the ship becoming cut off by a rapidly advancing enemy. A Sutherland might also be positioned towards the center of a task group so as to be well defended on all sides.

This is the default mission pod loadout for most Sutherland-class starships and can be switched out when docked at an appropriate starbase. The sensor pod contains Starfleet's highest acuity long-range scanning array capable of being starship deployed. This powerful and highly sensitive piece of technology can be configured to monitor subspace distortions up to five light-years away. Inbuilt quantum spectrometers and neutron pulse resonance scanners are able to image and analyze compositions of celestial bodies down to the nanoatomic level.

The sensor pod is what gives the Sutherland the best eyes and ears of any Starfleet vessel. Without it, the tactical advantages of communications monitoring and ultra-long-range scanning power are lost. This pod also contains the afore-mentioned probe launching system, which includes the facilities to produce and maintain mission-specific probes, including extremely complex and valuable multi-spatial probes.

Sutherland-class ships can be incredibly interesting and diverse places to serve aboard. Their considerable size makes for lively communities with plenty of activities available for those who wish to spend their downtime productively, or otherwise. Ships often possess arboretums, zoological centers, and stellar cartography domes along with the usual gamut of bars, lounges, and library archives.

The huge potential for cutting-edge research and specialist equipment attracts some of Starfleet’s keenest scientists. The science departments on these ships are so large that each ship becomes a self-sustaining research community. Even when no specific events take place, sub-department leads and area specialists will often give their own lectures and present their latest research findings to each other.

Engineers make up the second-largest department onboard the Sutherland. Keeping computer systems running optimally, fine-tuning finicky scientific apparatus, and transporting and building pre-replicated planetary structures are all potential situations an engineering officer may encounter. This environment favors officers who are jacks of all trades and who appreciate the fact that no two assignments will ever be the same.

Commanding such a large ship is no easy task. This assignment involves plenty of management skills when it comes to inter-departmental rivalries and egos that are liable to develop on a science vessel of this size. Captains must learn to balance the research needs of the scientific community with the practicalities of the engineers who make things happen. Friendly rivalries may develop into serious confrontations if not kept in check by a commanding officer with their ear firmly to the ground regarding shipboard goings-on. Pilots and command personnel might feel detached from these conflicts and must themselves be careful to avoid appearing aloof.

In 2384, the Advanced Starship Design Bureau received instructions from Starfleet Command to draw up plans for a new type of science vessel. Growing tensions in the Beta Quadrant caused concern within Starfleet over its ability to continue its exploration mandate should large portions of its fleet need to be repurposed for conflict with the rapidly destabilizing Romulan Star Empire. After two years of sifting through numerous design proposals, the Sutherland-class was the Bureau’s eventual response.

The design was favored above all because of its versatility. The chosen spaceframe borrowed heavily from the proven Nebula-class design concept. However, where the Nebula had been a generalist, involved in the full spectrum of combat operations, first contact missions, and diplomacy, the Sutherland would become a specialist. Indeed, the Sutherland was expected to be a “Swiss army knife” of Starfleet’s scientific operations. The ship is larger than its predecessor with even more internal modularity. This provides room for the kind of specialized science laboratories and research facilities that up until now has only been found on static Starfleet installations.

A wide range of large, customizable mission pods would be made available, further boosting the Sutherland’s ability to step into various logistical support roles throughout the fleet. Additions like the tactical pod provide captains with some limited combat capability should the need arise. As of 2400, however, the Sutherland’s main role remains as a scientific follow-up vessel for points of interest identified by initial surveys undertaken by Starfleet’s scouts and explorers. The ship has lived up to its design brief of being a one-stop-shop for identifying, analyzing, and disseminating research findings while remaining adaptable to the needs of the mission at hand.