Starbase Bravo (SB4) is the headquarters of the Fourth Fleet. Consisting of surface facilities on the Mellstoxx III and a large, modern Guardian-class spacedock in orbit, this base provides Fourth Fleet Command with a well-equipped operational hub with command and control facilities, repair and maintenance yards, and a satellite Starfleet Academy Campus. In addition to these primary facilities, there are additional surface bases and minor space stations in the Mellstoxx system that are all under the auspices of Starbase 4.

The original spacedock was constructed during times of tension with the Klingon Empire and the long, cold silence from the Romulan Empire, and was thus within striking distance of both territories. Ahead of Starfleet’s return to the frontier, a Guardian-class station was commissioned to replace the ageing Spacedock-class station, as Starbase Bravo is intended to serve as a launching post for some of Starfleet’s most vital operations. In addition, there are a number of planetary facilities and other smaller space stations, all of which are collectively part of Starbase Bravo.

Combining the functions of a repair and construction facility, an orbital habitat, a commercial hub, and a major defensive installation, Guardian-class stations are the largest and most powerful starbases in the Federation. From a distance, it is clear that they combine a number of construction strategies in use by older classes: the modularity of the Regula class and her descendants, with the massive spacedock first designed for the eponymous Spacedock-class.

Studded with docking bays of all sizes, Starbase Bravo is home to hundreds of departures and arrivals on an average day and thousands on a busy day, not even counting the fleet of shuttles, work pods, and runabouts that are constantly coming and going from her hangers. At any one time, you can expect a dozen or more starships to be in dock in various states of construction, repair, or maintenance.

A distinctive feature of the Guardian-class is it's eight quad impulse engines, mounted in two groups of four in the station's upper and lower reactor modules. These massive engines keep the station in orbit well above the atmosphere of Mellstoxx III with their red glow. Between these impulse engines are eight large deflector arrays, which both keep the space lanes around the station clear of debris and help provide the station with intensely powerful shields.

Starbase Bravo is equipped to provide recreation and leisure opportunities for beings of all physiologies, on a short or long-term basis. To cater to a standard crew of 85,000 and anywhere between 20,000 and 40,000 civilian residents living aboard the station at any one time, there are two-hundred holodecks and four-hundred holosuites, in addition to an equal number of gymnasia, sports courts, bars, replimats, restaurants, shops, galleries, and lounges.

While recreational facilities are spread throughout the station, many are concentrated alongside spaces for commercial tenants on the station's two promenades, which runs the circumference of the large hub in the center of the station above and below its cargo facilities. These spaces each provide five decks of space for venues of all sizes. 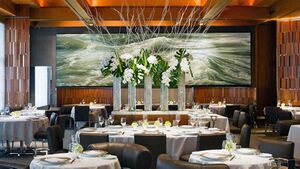 Though light and airy, the décor of Vandorin's Bistro belies the weight of the conversations that often happen here. Esterra Vandorin herself believes that an understated aesthetic allows her food to shine.

As the most luxurious and in-demand dining establishment on Starbase Bravo, Vandorin's is exclusive and hard to get into no matter if the docking bay is full or empty. You either have a table at Vandorin's, or you do not. Run by Esterra Vandorin, a Betazoid chef of impeccable taste, the bistro seeks to provide the most evocative gastronomic experience on the station. Unsurprisingly, it is easier for admirals, diplomats, and highly-respected experts to jump the waiting list and enjoy a booking. With white-linen service, fresh food, music provided by a real string quartet, and Esterra themselves often on-hand to provide recommendations, dining at Vandorin's is pure joy. Esterra also has several private dining rooms to hand for secure meetings over dinner, as they understand their clientele. 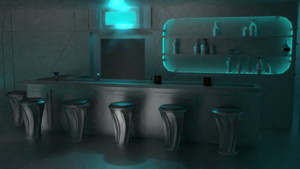 Run by Skal, a brusque Tellarite, Downtime is the bar of choice on Starbase Bravo for Starfleet officers wanting a no-frills drink. The fixtures are similarly plain: all spacer’s smooth metals and functional furnishings. The bar has a history from the original spacedock, and has moved over to the new station, so some of the furniture and even the replicator seem old-fashioned compared to the brand new starbase they now inhabit. Skal is a former Chief Petty Officer who takes a perverse delight in now speaking his blunt mind to officers, given that he can no longer suffer any repercussions from doing so. The walls are adorned with replica plaques of starships whose captains Skal and his predecessors have served drinks to, going back to the original Starbase 4’s construction, or else other Starfleet memorabilia. Civilians rarely go here. 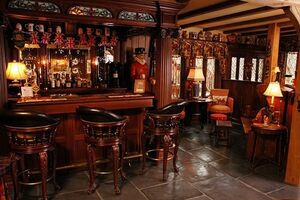 The Gate Inn is a tourist trap, but the food is good and sometimes you need a good tourist trap in your life.

An old-fashioned pub-style establishment, run by the ever-helpful proprietor who’s only ever given his name as ‘Terry.’ The Gate Inn, so named for the station’s position on the threshold between Core Worlds and the Federation’s old frontier, is a new arrival at the station. It is decorated much as an ancient Earth pub, with wood-panels and a floor that is somehow always a little sticky. Terry specialises in good beers, but also does a line in hearty pub food. Considering he probably uses a replicator, his limited menu is clearly an affectation. 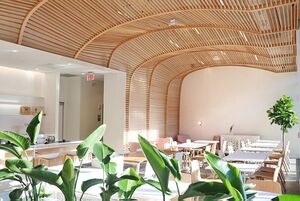 Bright and airy, it can help you forget that you're on one of the largest space stations ever built.

One of the coffee shops on the promenade, Brew is bright and relaxed. Specialising in a wide variety of hot drinks and baked goods from across the quadrant, it offers both comfortable lounging space as well as decent table space for more intimate or professional engagements. The lighting has been specifically designed, along with the array of potted plants, to evoke a more ‘planet side’ feel. This is often a spot that crewmembers or visitors go for a change of pace from normal life on the station, as it takes a lot longer to get a cup of coffee from a shop that must make it from scratch rather than replicating it. Some folks swear up and down that it tastes better than anything a replicator can make, but it's often a little bit of an adjustment for individuals who aren't accustomed to the caffeine and acid content of real coffee.

Brew is operated by Starfleet and is staffed with holograms, rather than organic baristas.

The starbase has two large docking facilities on the upper and lower ends of the station, with the upper facility being able to hold several dozen large starships with construction facilities to build more and the lower facility holding several dozen smaller starships; the lower facility does not have space doors and is used for traffic that is expected to have a quick turn-around time. In addition, there are dozens of smaller docking bays and hangers across other areas of the station. It is always buzzing with activity.

Starbase Bravo carries all manner of shuttlepods, shuttles, and runabouts. You can learn more about them here.

The Bravo Fleet Academy Campus (technically known as Starfleet Academy—Mellstoxx IIII) is the main facility through which officers entering the Fourth Fleet pass, either spending all four years of their training there, or sometimes just a few weeks, depending on their course of study and other factors. This campus has the capacity for 10,000 students and graduates about 2,500 officers per year. As a Betazoid colony, this academy campus is especially known for its counseling program, though it is a full-service academy.

The facility itself has several dormitories, classroom buildings, and athletic facilities, all designed to the highest standards of Federation engineering. The campus is clean, modern, and peaceful, with large grassy areas between the buildings and a quadrangle containing several hundred tree species. Cadets generally spend most of their time on the surface, though they are permitted to visit the main starbase for leisure activities and for certain training exercises.

The Parade Field is used for large gatherings of the student body and for training exercises, retaining its name from several ancient academies on Earth. Cadets rarely actually are asked to march or parade in the modern Starfleet, but this large field can also be used for sporting events and as a landing area for shuttlecraft when large movements of people are required.

The Cadet Union is a large student support facility that has mess halls, lounges, academic advisors and tutors, as well as holodecks. There are a number of cafes as well that offer places for cadets to study.

The classroom buildings on this campus are all about ten stories tall and contain several hundred classrooms each; there are few large lecture halls, but there are a handful of rooms that can accommodate classes of one-hundred for the rare large lecture course.