Resettled in the early 2380s, it now serves as the Federation's command center in the Quadrant. The colony is now populated by roughly ten thousand people, scattered over an area of two hundred square kilometers.

Federation Diplomatic Corps offices are found on New Bajor. The compound in which the FDC offices are located also includes facilities for the assigned personnel, including the office building, housing complex, and recreational facilities. 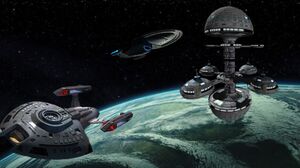 Opaka Outpost is a Presidium-class space station orbiting New Bajor. The hub of Starfleet operations in the Gamma Quadrant, the space station is capable of accomodating up to fifteen Starfleet vessels at a time, and is equipped with drydock facilities that can assist in starship overhaul, repair and resupply operations. Hastily constructed to establish a Federation foothold in the quadrant, the Space Station is slated to be replaced by a more versatile structure in years to come.