The Narendra-class station is a mid-sized Federation space station design that draws design inspiration from the likes of the far larger Canopus and Spacedock-class stations. Designed to be assembled at manufacturing facilities within the Federation and then shipped in pieces to their final locations, the Narendra is essentially a kitset station designed for rapid deployment. If parts are in stock and available, a Narendra can be brought online in a new location in a matter of months, versus the years or decade it may take for a larger facility.

The intention was for a class of station to support Federation and Starfleet interests at a minimal cost in border sectors while not appearing as an escalation of assets to Federation neighbours who may take umbrage with a larger, more capable and fortified station. Not without their teething issues upon initial activation, each Narendra station has contributed to the success of the next station. Upgrades for the first generation are being considered, though this too is likely in the form of kitset compartments being deployed to expedite the work on site. 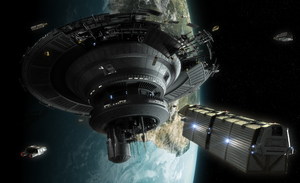 The exterior of a Narendra-class is reminiscent of Starfleet's various spacedock classes - a giant mushroom in space. Compared to the similar Canopus, it could be described as only having half the stem. The dorsal and ventral aspects of the station house large antenna farms, allowing the station to act as a regional communications relay and repeater as required. Dedicated shield generators protect the antenna farms from focused attacks.

Designed for forward deployment, the Narendra-class carries a wide variety of defensive screens and weaponry. The surface of the station is dotted with phaser array strips, torpedo launchers and older phaser banks in certain locations to provide focused firepower to dissuade attacks along prescribed vectors. Due to the size of the station, it is not intended or expected to hold off a dedicated attack, but to dissuade raids and rapid strikes as well as buy enough time for reinforcements to arrive.

The central core of the station houses the primary computer cores as well as truck access for vital services up and down the height of the station. Primary cargo lifts are located here as well to transport materials from the cargo bays to wherever they need to go.

This class of station, like many others, is divided into a number of different sections, which take the form of several different bands which house all of the station's facilities of a particular type together.

The topmost levels of the station house the Operations division, typically referred to as Ops. The station's primary command and control functions can be located here as well as offices for the station command staff. Offices and facilities abound for the Starfleet personnel aboard the station to perform their duties. Of note is a large auditorium built into each station, capable of hosting a hundred officers and guests in a single sitting. While a holdover of the original Narendra design requirements, the auditorium has become standard to the class and can function as a large-scale briefing room to concert hall as required.

One of the larger sections of the station the galleria functions as the core of station life and commerce, so named because of the twenty massive viewports that offer impressive views of space. Spread over multiple levels, with terraces descending down the levels, and wrapped around the station core, no two gallerias are the same once the stations come online. Vendors and locals alike soon discover that the modular nature of the station is more than amenable to modification across the galleria, by design, and modifications are relatively simple to engage in. Bulkheads in the shopping area can be moved and the terraces shifted with a bit more work.

This tends to result in a quick fashion that each galleria becomes its own architectural marvel. Restaurants, kiosks, salons, parlours and a variety of shops can and will be found across the galleria as local enterprises take root. Most tend to be representative of the galactic neighbourhood they find themselves in, with encouragement to galactic neighbours to take part in order to help build report and economic ties as well as informal diplomatic channels.

Each Narendra hosts an array of research laboratories, as befitting any generalist Starfleet station. While not as expansive or well equipped as larger stations or dedicated science stations, their modular nature does mean that over time they can be readjusted as local conditions may require on a more regular basis. Each station does host a sizable stellar cartography installation, combined with the station's long-range sensors and telescopes, to help map new regions and collate information from nearby starships. This area of the station does contain its own communication center for coordinating scientific endeavors, backup computer cores, small lecture halls and secure storage facilities.

Spread across multiple levels is the station's living quarters. Containing hundreds of single-, double-, and family-sized occupancy quarters as well as a handful of diplomatic suites. Recreation centers, game rooms, holosuites, and a small selection of eateries, typically similar to those found on the galleria, can be located in this section of the station. Occupying a large space in the middle, wrapped around the station's support trunk, lies the station's arboretum, a full forty meters in height.

Located on the lowest levels of the upper hull and comprising the widest part of the station is the docking section. There are twelve docking ports capable of supporting starships of nearly any size.

The medical section of the station contains facilities typically greater than mere starships, but small and ill-equipped compared to larger stations. Six separate infirmaries dominate this section of the station, each equivalent to a large starship, and specializing in its own field of medicine. Counseling offices, wards for a variety of species and isolation facilities accompany cutting edge, at the time of assembly, scientific labs, limited research facilities and cryogenic suspension facilities for cases that can't be resolved on-station. A triage center lies in the heart of the station, with its own dedicated transporter facility and quick access to the primary sickbays. Each sickbay and the triage center all possess their own EMH, though with programming adjusted for their field of work.

The midline of the station is a cavernous space split into six main bays, or “wedges,” with reinforced support bulkheads dotted with pressure hatches and forcefield backups that enable any of the six wedges to be isolated from the others as needed. The internal configuration of stationary hatches and pass-throughs could allow a small craft to enter one wedge and exit out the opposite side of the station, though this is rarely encouraged in practice given the extensive traffic in and out of the station. The available internal volume of the wedges contains significant space for cargo pallets and shipping containers, short-term and long-term repair bays, propellant stores, warp coil stacks, impulse engine spares, and secured armaments facilities for any armed small craft.

The Engineering Complex is located below the midpoint of the station and above the fusion generators. Engineering comprises four large levels and is interconnected via turbolifts, jefferies tubes and humble ladders as required. Engineering contains all the essential services for keeping a Narendra-class operational as well as housing backup computer cores and a hardened auxiliary command center commonly used for damage control but capable of full station control if required.

Primary power generation aboard the Narendra-class is achieved by three massive fusion generators located at the bottom of the station. Each generator plant contains four linked fusion reactors that collectively distribute plasma throughout the station. Two of the generator plants are enough to meet the station's power demands which allow for regular rotation in and out of service for maintenance purposes and hardware longevity. Each generation facility can be independently jettisoned from the station in an emergency.

Because of their modular nature, Narendra-class stations vary widely in terms of their sophistication. The oldest units continue with their original mid-24th century systems, while the newest ones are built to modern specifications. Being modular means that upgrades are relatively easy to accomplish, but given that they are meant to be deployed quickly, they typically do not come stock with the latest and greatest technologies. Rather, they are tried-and-true, well-designed stations that have few peaks and valleys in their capabilities.

While substantially more capable than smaller stations to service starships, Narendra-class stations are not primarily meant to handle starship construction tasks, as this is suited to dedicated shipyards to Spacedock-type facilities. The twelve docking ports they possess allow for large numbers of starships to come and go on a daily basis, however, and they are more than capable of handling light repair tasks or for patching a ship up to give it the spaceworthiness to proceed to a dedicated repair base.

Many of these stations are deployed in contested areas, and so they are intended to defend themselves, but they are not fortresses. Indeed, one of the strategies Starfleet has in mind with this class is that they should avoid attracting undue attention. Weapons systems are mounted in two bands, one under the galleria and another directly above the fusion reactors. Taking a similar approach to other stations, these wide bands of weapons provide comprehensive firepower--as long as threats don't get too close.