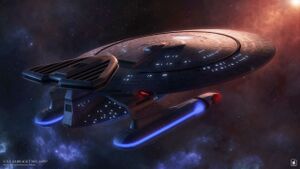 Mission pods are large interchangeable equipment modules located at the rear of some Starfleet ship classes. A wide variety are available for captains to choose from depending on the needs of the mission at hand. In order to switch pods, starships must be docked at a starbase large enough to house the vessel internally. Appropriate diagnostics and testing of ship's systems require a minimum of two days for the swap-out procedure to be completed.

Two of the most notable starship designs reliant on mission pods are the Nebula Class and the Manticore Class.

Commonly used pod loadouts are kept on hand by starbases for quick switching. These include:

Some captains may wish to design custom mission pods to suit special assignment needs. All switch-out capable starbases also have the ability to retrofit pods with new components. This will, however, take several weeks to accomplish as opposed to mere days required to fit a prebuilt pod.