A Hazardous Situation Response Team, more commonly referred to as a Hazard Team, is a special unit stationed aboard many Starfleet vessels, intended for use on away missions and other situations where heavy combat is anticipated.

For centuries, Starfleet vessels dispatched their senior staff at the front of all major operations and away teams. This was by design, as many starships encountered highly unpredictable situations and undertook missions that could have profound Prime Directive and political ramifications. In fulfilling its mandate of diplomacy and exploration, Starfleet deemed it necessary that seasoned and qualified officers were positioned to make these immediate and urgent decisions.

By the 2360s, it was no longer common for starship captains to regularly take on away missions themselves, as regulations changed to learn from the many situations in which this put the ship’s senior-most officer in unacceptable levels of danger. This was underscored by the limited but fierce ground combat Starfleet engaged in with the Cardassians in the late 2350s. Still, up until the Dominion War the standard composition of most standard away teams included a vessel’s first and second officers, and often other senior specialists such as the ship’s counselor or medical officer. While the war itself did not immediately change this, the conflict made the disadvantages of sending senior officers (many of whom had very little experience of warfare) even more evident.

Starfleet hadn’t engaged in a full-scale war since the 2250s, and so the sudden shifting to a war footing against the Dominion left the majority of the fleet’s ships thrust into combat despite their crews only having been trained in basic personal defense. Onboard training began with varying degrees of intensity and with different techniques as each crew made personal adaptations. This increased starships’ numbers of combat-ready personnel in case of boarding or ground action. However, the crew members most capable of handling dangerous away missions were still most often security officers, who usually lacked the training to handle specialized engineering or scientific tasks. With increasing casualty rates, many captains simply couldn’t afford to risk their senior officers on the most dangerous assignments, especially when situations were just as likely to need their talents on the bridge.

As a result, many captains developed hybrid teams with engineers or scientists trained in combat and embedded with security officers to provide versatile response forces. In larger operations, these specialized teams were able to set up beachheads or perform reconnaissance. For ships not assigned to these sorts of assaults, the teams were useful to take the place of standard away teams when the safety of a location was in doubt.

While this was only a temporary war-time measure and never formally implemented or standardized across the fleet, many captains unofficially shared their experiences and techniques for training and equipping these teams. There was also broad agreement that these expanded security teams were more effective on missions with non-combat priority objectives or challenges. The units benefited from the expanded skillsets of their members, while their continued joint training made them better-prepared in quick-changing situations than common away teams of junior officers with little collective experience. Teams who had been together for many missions also demonstrated superior unit cohesion to ad-hoc away teams.

These lessons lay dormant for some years after the Dominion War, with Starfleet eager to shed its militarisation. But the Federation’s shift to more internal priorities after the Attack on Mars coincided with the ascent of many Dominion War veterans to the higher echelons of Starfleet Command. While there was no return to a doctrine of militarisation, Starfleet was determined that its crews be ready for danger, as well as exploration.

This led to the birth of the Hazard Team in the late 2380s. While not replacing either security teams or senior staff-led away missions, Starfleet Security drew on the experiences of the Dominion War to codify the formation of such units: starship crewmembers drawn together from multiple departments, consistently training collectively, to provide a combat-ready and elite team supported by a variety of skills in engineering, diplomacy, and science. After a few years, this concept expanded to included specialized teams for engineering, medical, and diplomatic vessels, as well as hazard teams for starbases and other space stations.

Hazard Team doctrine is extremely flexible, the unifying concept between the many possible variations being that these teams are meant to handle potentially hazardous situations that other members of the crew aren’t trained for.

The size and structure of Hazard Teams differ from command to command based on the ship or base’s specific needs, though they usually have between six and twelve members and ships may have multiple units. Likewise, team composition depends on the assignment: some captains prefer to select a variety of combat specialists supplemented by technical and scientific experts, while others choose well-rounded teams of scientists, engineers, and pilots who have combat experience and undergo extended training. A command might also have different teams with different core functions (for instance, an engineering team, a science team, and a medical team.) Frontier starbases tend to have several of these teams for away missions on runabouts which don’t require a full starship’s attention but are too dangerous for a standard away team. 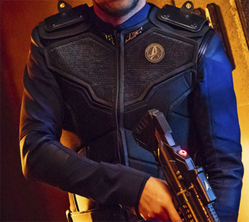 Lessons from last-generation Starfleet armour and weaponry contributed to the development of Hazard Team equipment.

Universally, none of the Hazard Team are members of the ship’s senior staff or first-shift bridge crew, and the team reports to the Chief Security Officer, rather than the senior command staff. Some captains have selected a different member of the ship’s senior staff to act as Training Officer alongside the Security Officer, especially when the team’s speciality aligns more closely with something outside of security. It is not unheard of for a Hazard Team leader to take part in operational meetings for the senior staff, but this is wholly at the captain’s discretion.

Hazard Team members, other than during their missions and during training sessions, have “day jobs” within the ship’s regular department structure, as most starships don’t encounter enough hazardous situations for these individuals to be constantly deployed as a Hazard Team. For instance, the team’s medic is almost universally also a nurse or science officer. No one is purely a member of the Hazard Team, and it’s not considered a career path either. Junior officers and chiefs tend to spend a year or two at maximum assigned to these teams, as by design they don’t consist of anyone over the rank of lieutenant, on all but the largest of starships.

Similarly, there is no centralized structure for Hazard Teams above the ship or starbase level; Starfleet Security develops new training materials and equipment patterns for them, but it’s not a branch of Starfleet. This is on purpose: to keep the specifics of the doctrine to individual starship and starbase commanders, without a lot of overhead or bureaucracy getting in the way of creating teams that meet that command’s needs. Rather, the Hazard Team is a conceptual structure that can be implemented in myriad ways. 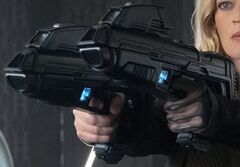 Hazard Teams make heavy use of the most militarised equipment available to Starfleet.

As with the structure and doctrine, Hazard Teams carry a wide variety of equipment, based on their mission needs. Many starships equip them the same way they equip standard away teams, as the enhanced training is generally seen as enough to keep them safe on their missions. Other ships that expect more frequent combat equip their Hazard Teams with light body armor and specialized weapons. Starfleet Security and the Starfleet Corps of Engineers have developed a number of replicator patterns for equipment that might be useful for these teams, and, indeed, Hazard Teams are often responsible for the field testing of new personal equipment.

As skilled combatants, many Hazard Team members are hobbyists in a variety of martial arts, including marksmanship. This may make them proficient in unusual, cultural, or personalised weapons which rarely see use in standard Starfleet missions, but can be more useful for the Hazard Team’s operations.