The Devore Imperium is the authoritarian government of the Devore people. Led by their military, they are a guarded and xenophobic people who keep tight control of their borders and have little business with outsiders. Their full military might is difficult to ascertain as they seem more focused on their internal security, but as one of the largest and oldest powers of the Gradin Belt they are likely formidable for the region. Due to limited engagement with this relatively isolationist power, knowledge on their culture and government are limited.

The Imperium is an oligarchic military dictatorship led by the commanders of its armed forces. They hold supreme authority over the whole of the Imperium as well as its military, ruling by decree. Most interactions between Starfleet and the Devore have been with military officers on assignment beyond Imperium space or guarding the border. The military is clearly heavily entrenched in all levels of the government, officers serving as officials and overseeing public services, though there do seem to exist civilian government officials not drawn from the military in some specialist or bureaucratic roles. Because of this xenophobia and authoritarian form of government, it is rare to meet a civilian citizen; they rarely travel beyond the Imperium, and are usually not chosen representatives for the formal meetings that make the bulk of interactions with the Imperium beyond an encounter with their navy.

Highly xenophobic, outsiders are permitted entrance to Devore space only if they follow a predetermined route and accept being subject to regular, meticulous inspections by Devore forces. Failure to cooperate with these terms once accepted usually results in the impoundment of the ship and internment of the crew.

It is difficult to reach conclusions about larger Devore society or culture with such limited interactions. What is clear is that the Devore Imperium is deeply suspicious of outsiders. They hold a particular prejudice against telepaths, calling them "gaharey" and claiming that because they are capable of reading minds, they have no concept of trust and are themselves untrustworthy. Any "gaharey" found within their territory is sent to a detention centre, along with any who have harboured them.

It is unclear what this stated reason for mistrust says of Devore culture. Such valuing of trust to the extent that reading minds is seen as either a threat to a societal norm of taking people at their word, or an indication of deviousness, seems at-odds with most militarised societies studied in the past. It is possible that giving one's word and this being taken at face value is a mark of respect in Devore society, likely among those already in positions of authority. Alternatively, many military dictatorships rely upon misinformation in order to control the populace, an agenda that telepaths may be seen as a threat to. Even more simply, many dictatorships maintain control over the populace by turning them against an insidious Other; it is possible the distrust of telepaths is no more complicated than that they are the chosen scapegoats, there to be hated so an oppressive government is not.

Devore military officers often demonstrate great pride in their public service, often disregarding what the Federation would count as unethical conduct or abuses of power as justified for the Imperium and necessary acts of patriotism. Some encounters with ranking Devore military officers suggests they may be highly educated in arts and sciences, though it is unclear to what extent Devore culture values such teaching, and how propagandised it is. 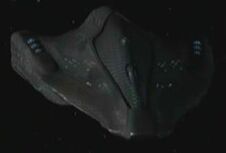 As stated, the Devore military controls all aspects of the Imperium, including the government. The commanders of the armed forces head the Imperium itself, and all echelons of the government yet encountered have been led by military officers or include military personnel. The extent to which the Devore guard their borders suggests a large military with an extensive infrastructure within Devore space, but they have shown little interest in aggressive expansionism. When encountered, the Devore navy has appeared to be efficient and disciplined.

In 2375, a Devore warship was considered comparable to an Intrepid-class starship. They routinely operated in small units known as squadrons, and were equipped with refractive shielding that made them difficult to detect on sensors.