The D'deridex-class warbird was the pinnacle of Romulan engineering and power in the mid-24th century and the pride of the Romulan fleet. First introduced into the Romulan fleet in the 2350s, the D'deridex was a largely guarded secret, decades in the making, and required many other predecessor classes as testbeds for technologies eventually deployed, together, on the famous warbird.

Following the Romulan supernova, the D'deridex is largely only seen utilized by the remnants of the Romulan Star Empire faction within Romulan space.

Although designed primarily as an intimidating warship, the D'deridex is fully capable of carrying out any mission asked of it. The D'deridex fields an impressive sensor array which allows it to be an overly capable exploratory platform. The sensor array's primary purpose was intelligence gathering across the Neutral Zone, however, as the years went on warbird commanders found the D'deridex's sensors to be versatile and capable enough to handle nearly anything that their missions required.

While the D'deridex wasn't built with missions of science in mind, the ship is more than capable of handling almost any mission of exploration thrown at it.

For decades, the D'deridex served as the primary flagship class of the Romulan Star Empire, carrying out missions of scientific endeavor, diplomacy, and combat. The original purpose of the D’deridex also explains its size — it was entirely meant to use its size to intimidate foes on the battlefield. The D’deridex was designed to be larger than anything the Federation or Klingon Empire fielded at the time or reasonably would in the coming decades.

In addition, the D'deridex was the first ship in the Romulan fleet to field the modern artificial quantum singularity power plant. While previous classes had also used it, none had been able to power a vessel nearly as large or impressive as the D'deridex. However, one major drawback to the size of the D'deridex is that it loses a lot of maneuverability compared to other large vessels of the Alpha and Beta Quadrants. This was never more apparent than during the Dominion War when Dominion attack ships were able to deal significant blows to the Romulan fleet by maneuvering around them and landing critical blows. 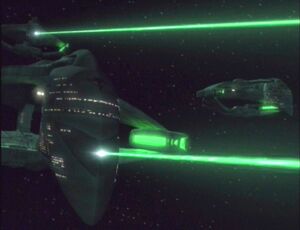 A squadron of D'deridex-class warbirds firing their main disruptors.

As a warship, the D'deridex primarily utilizes its versatile forward disruptors in combat. Additionally, it fields additional disruptors in every quadrant of the ship giving it 360 degrees of coverage. Each disruptor is capable of firing in both beam and burst mode with the main forward nose disruptor equaling energies of the main phaser array on a Galaxy-class starship.

The warbird's disruptors are complemented by standard plasma torpedoes, a robust shielding system, and a Romulan cloaking device. The cloaking devices on the D'deridex's were state of the art at the time of the class's construction, and over the years have gone through many upgrades paving the way for future generations of cloaking devices. However, the ship's size and power plant made for a recipe that requires all D'deridex's that are traveling at warp to stay under warp 5 in order to avoid detection while at warp.

For a ship built primarily for combat, the D'deridex is surprisingly comfortable for its 1,500+ crew. This fact is due primarily to the size of the ship which allows for plenty of quarter space so that very few crew are required to share primary living space. The ship is also morale-friendly, sporting luxuries such as gyms, hologrids, lounges, a bar, and grooming areas.

The D'deridex-class warbird was first deployed in the early 2350s after the culmination of decades of previous classes serving as testbeds for the features of the ship. The double hull design, the new generation artificial quantum singularity, the new plasma torpedoes and disruptors, and the new sensor suite were all technologies that were fielded on previous classes before being integrated into the D'deridex.

A D'deridex faces down a Galaxy-class starship.

Over the next few years, Starfleet intelligence devoted considerable resources to the new Romulan threat. The defection of Admiral Jarok promised to be a famous intelligence coup, but disappointingly it proved to be a disinformation ploy by the Romulans. The return of former Ensign Stefan DeSeve, who had previously defected to the Romulan Empire in 2349, generated a good deal of background information on the Romulan military structure and the general capability of their fleet but provided little specific detail. The Federation's greatest victory in the intelligence war occurred shortly after the return of DeSeve when Vice Proconsul M'ret and two of his aides defected. M'ret, who had served on several defense-related councils in the Romulan Senate, was able to provide a great deal of detailed information on the capabilities of the Warbird, among other things.

During the Dominion War, the Romulans dedicated the D'deridex to the war effort where they made excellent command ships. However, the Dominion was able to inflict significant losses against the class, leading to future Romulan designs including the Valdore-class warbird.

The D'deridex continued to be a front-line vessel after the Dominion War and well into the time leading up to the Romulan supernova. Due to its size and ability to accommodate large amounts of troops at once, it was the perfect vessel to aid in the Romulan evacuation. The Tal Shiar handed over their small fleet of D'deridex warbirds and the Romulan military began to evacuate as many people as they could in round trips. In the end, it wasn't enough to evacuate all of Romulus, and many of the warbirds ended up in the hands of what became the Romulan Star Empire's successor state, still comprising a bulk of their fleet. The few that split off for what became the Romulan Republic were dismantled and used to rebuild their society on New Romulus.