Sydney-class transports have been in service since the 2280s and remain a ubiquitous presence in the Federation's star lanes, even though the design is over a century old now. They fill a niche in between the smaller Aerie-class transport and the much larger Olympic-class liner, moving a few hundred passengers in moderate comfort on medium-distance routes. (Technically, the other two designs were created to fill niches above and below the Sydney-class's capability.) They're also capable of serving in mass transport roles, such as to move large numbers of Starfleet personnel or to help in evacuations.

The Sydney-class by current standards is relatively small, but when it was first introduced it was larger than the contemporary light cruiser. The bulk of the Sydney-class is devoted to passenger accommodations, with two hundred double berth cabins that take up the entirety of decks four, five, and six. The lowest two decks are given over to cargo storage, which is used by passenger belongings, small parcels, or colonial supplies when the ship is being used in that capacity. At maximum capacity, the ship can handle 400 passengers and a crew of 80, but normal passenger counts of between 200 and 300 are more common, factoring in solo travelers. In the 2370s, these ships were refit to include six small holosuites, which are in high demand on their voyages, but Sydney-class ships also include a number of lounges, gyms, and other recreational spaces to keep the crew and passengers entertained (and sane) on journeys that sometimes last more than a month. In fact, the longest Sydney-class routes can take up to three months.

The Sydney-class shares warp engine technology with the Miranda and Constitution-class refit. With updates over the years, it is now able to sustain a cruising speed of Warp 6, with a maximum speed of Warp 8 in emergencies. This design has been thoroughly tested, and so maintenance protocols have been streamlined immensely in the century following the ship's introduction; while originally over half of the ship's crew were engineers, it's now down to less than a third, leaving more personnel to support passengers.

Some of these vessels have been refit as hospital ships during the course of their service histories, but these conversions were largely reversed following the introduction of the Olympic-class. The capability to perform this refit still exists, though, and it might be completed for a dire emergency, or to create a small hospital ship for a civilian agency.

Many Sydney-class ships are used as colonial transports, for second and third wave colonists who can be transported as passengers without needing to bring along shelter as well, where the ship itself would need to either be dismantled or deploy modules to the surface (such as with the Wallenberg-class tug). 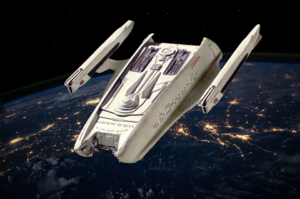 In the 2270s, the most common large passenger transport was a Ptolemy-class vessel equipped with a starliner pod. This method of transport was very popular, but Starfleet found it increasingly difficult to justify using a ship capable of so much more for moving only a few hundred people between ports when they were much more useful moving large amounts of cargo. Ships like the Miranda-class light cruiser were often used as a stop-gap, but they too were wasted on this duty rather than exploratory or patrol duties. To solve this problem, Starfleet ordered the Advanced Starship Design Bureau to come up with a dedicated passenger transport using the latest technologies which could competently handle medium-duty, medium-length routes.

The resulting design, the Sydney-class, had almost half of the deck space of the Miranda-class, but with substantially simpler internal systems, giving her even greater passenger capacity. The design was mass-produced and immediately entered service on a number of routes. Even by the 2370s, it was on important routes like the one between Earth and Deep Space 9, and by 2399 it shows no sign of being replaced any time soon.