Starfleet Academy—Mellstoxx III is a satellite campus of Starfleet Academy located on the premises of Starbase Bravo's planet-side facilities. It is the main facility through which officers entering the Fourth Fleet pass, either spending all four years of their training there or sometimes just a few weeks, depending on their course of study and other factors. This campus has the capacity for 10,000 students and graduates about 2,500 officers per year. As a Betazoid colony, this academy campus is often thought of for its counseling program, but it is a full-service academy with particular strength in leadership, making it a prize assignment for cadets intending to become captains themselves one day.

This campus was built in the mid-2350s, opening formally in 2356 Its facilities have continued to receive regular updates since that time, and its standard of living is indistinguishable from that of Starfleet Academy's main campus in San Francisco. Built to Betazoid aesthetic standards, the campus is laid out in a pattern that is broadly symmetrical but also has subtle variations between its four sectors, representing harmony and diversity simultaneously. The campus itself is bordered by a decorative arched colonnade, both bounding it in a perfect circle ten kilometers in diameter, but also being open to the rest of the starbase and the colony.

Within the boundaries of the campus, the academy's main buildings are laid out along four large greenspaces in a cruciform arrangement, connecting at the center at a circular area known, somewhat ironically, as the Ellipse. At the center of the Ellipse is the main administration building. North and South of the Ellipse are the two grass parade grounds, each with five nearly-identical dormitories both on the east and west sides. East and West of the Ellipse are the two quadrangles, which mix trees, gardens, and plazas, each with three classroom buildings both on the north and south sides. Where the rows of dormitories and classroom buildings meet are four cadet services buildings, each of which contains an infirmary, physical fitness center, several holodecks (for training and recreation), cafes, transporter rooms, and a library.

The North-West sector contains a stadium that can seat up to thirty thousand and can be configured for nearly any sport or gathering. The South-East sector contains an auditorium building with seating for twelve thousand, used almost exclusively for all-academy meetings. Both the North-East and South-West sectors each contain two defensive towers and one of the academy's two hanger facilities. 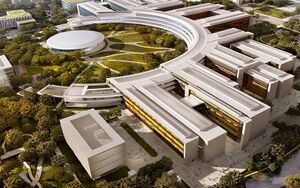 The administrative building at the center of the ellipse, showing one of the quads to the west (left) and one of the parade grounds to the north (right).

The center of the campus is a circular area known as The Ellipse, where the two parade grounds and two quads join. The academy's administration building is located at the center of this area of green space, water features, and gardens. With bright white walls, it has both curved wings of offices nestled amidst the trees, as well as four linear sections that connect all the way out to the edge of the ellipse to the paved pathway ringing the area.

The administrative building itself is home to both the academic administration of the campus itself as well as to the headquarters of Fourth Fleet Training Command. There are also a number of classrooms and offices in this structure, located in the wings peeling off from the crescent-shaped structure.

Within the crescent is a (relatively) small auditorium with seating for 2,500, used for large briefings. The administrative facility has its own transporter facilities.

The North parade field of the Mellstoxx III campus, showing two of the academy's dormitories.

The academy's twin parade fields stretch out North and South from the Ellipse, lined on either side by the dormitories. These wide expanses of grass are bordered by trees on the dormitory sides and a footpath around the entire perimeter. A picturesque setting, organized cadet physical training takes place here. While the cadets rarely "parade" as such, the two spaces are large enough to handle morning exercises simultaneously for all ten thousand cadets, while also being within steps of their dorms.

The north parade field ends at a clamshell-shaped shelter that contains a large stage, used for commencements and other ceremonies. The south parade field ends at the academy's ceremonial gate to the rest of the starbase, which graduating cadets walk through upon their promotions to ensign. In emergencies or other exceptional settings, the parade fields can be used to set up field hospitals (though that would be a total disaster if the starbase's orbital and ground-based hospitals were overwhelmed) or to handle mass shuttle take-offs and landings.

The academy has two quadrangles, which extend east and west from the Ellipse. These areas include trees, gardens, and water features, providing areas to study and relax. They each have tree species representative from all areas of Mellstoxx III, and a number of Federation member worlds. They are bordered on the north and south sides by classroom buildings. Often the site of informal gatherings, pick-up sports games, and other recreational activities, the two quads provide shade and rest, contrasting the sunshine and exercise of the two parade fields. 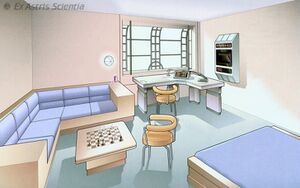 A cadet room, representative of that allotted to a third or fourth-year cadet.

The academy has twenty dormitories, each capable of housing five hundred cadets. First-year cadets are four to room, with bunk beds and a single bathroom. Second-year cadets are four to a suite, with two double rooms sharing a bathroom. Third-year cadets are two to a suite, with individual rooms sharing a bathroom. Fourth-year cadets have private rooms and their own bathrooms. This is meant to acclimatize cadets to the wide variety of accommodations they might experience in the fleet itself, as well as to get them used to sharing tight spaces and build relationships. Floors are organized into wings that have all four ranks of cadets living together, with more senior cadets mentoring more junior cadets. Each room has a seating area, one or two desks, and a replicator, in addition to the bed(s).

Named for accomplished Starfleet officers, individual dormitories have developed traditions over the years, as well as their own spirit and culture. Generally speaking, the dormitory a cadet is assigned to when they first arrive is the one they will remain in for the duration of their tenure at the academy.

Like all Starfleet Academy campuses, the primary goal of this institution is to prepare cadets for service in space, be that on a starship or space station, and so it has numerous training vessels available. The largest and most important of these vessels is the USS Exeter, which is a heavily-modified Constitution-class heavy cruiser that serves as the site for full cadet and enlisted training voyages, as well as a laboratory setting for command school candidates. It's also used in a stationary capacity to practice safety drills and other familiarization exercises. Nearly every student who passes through the academy will end up aboard this ship at some point or another.

In addition to the Exeter, the academy has a dozen Danube-class runabouts for smaller scale training exercises, and forty shuttles of various classes. These are often used to transport groups of cadets far from the colony for survival training. For flight training, the academy has two dozen Sparrow-class flight trainers, which are un-armed starfighters with stripped-down instruments and controls for learning purely manual flight techniques.

Starfleet Academy has a unified curriculum, and so all of the programs available at the main campus are also available at this campus. As a full-service academy, it's possible to start here as a first-year student and do all four years of your program here, but many students spend part of their time at another campus (such as the main campus) and then spend the last two years of their program at the Fourth Fleet Academy after having been tapped to eventually serve on a ship in this fleet. The Fourth Fleet is a rapid response unit, and so field training opportunities are more rigorous at this campus than other campuses, and there are more opportunities for cadets to have leadership experiences in the field, but the academic experience itself is the same as it would be in San Francisco.