The Ross-class explorer is a limited production offshoot of the Galaxy-class explorer which incorporates advances from the Sovereign class and serves as a predecessor to the larger and more complex Odyssey-class explorer. While in almost every respect, her performance is close to her parent class, she is slightly faster, has a smaller crew, and has greater small craft abilities. The handful of these ships in Starfleet routinely see deep space exploratory service.

As with all explorer-type starships, the Ross is equipped for extended deep space missions without starbase support. These ships have already been sent on five and even seven-year missions past Federation space, performing just as well as their cousins. One advantage the Ross has over the Galaxy in this respect is that its warp-capable saucer section ensures that the crew would not get stranded should they need to abandon the stardrive section.

Changes to the Galaxy spaceframe have eliminated some of the mission-configurable space for extra labs or bespoke equipment, so the Ross has a more standard layout for its science departments. It also tends to carry fewer non-mission scientists. The sensor pallet configuration is quite similar, with lateral bands of sensors running along the primary and secondary hulls.

Diplomatic capability on the Ross is equivalent to that on the Galaxy, with enough conference halls, guest quarters, and communications capacity to easily host multi-party talks and to serve as an impressive ambassadorial presence in first contact situations. Indeed, with the introduction of the Obena and Odyssey-class starships as Starfleet’s preferred diplomatic vessels, the Ross typically finds itself engaging in the occasional first contact, but is less often sent on diplomatic missions to known powers.

One unique feature of the Ross is its large promenade which rings the superstructure of the saucer section, providing expansive views of space and the ship itself. This area allows for informal gatherings between delegates and features several event spaces, as well as the ship’s main lounge on the centerline.

At a glance, the differences between a Galaxy and Ross appear superficial, but a large amount of the external design of the original class has been altered to create the Ross. The primary hull is narrower, and is closer to being a circle rather than an oval, while the secondary hull has also been narrowed in its proportion. Part of this was to reduce excess bulk to increase the ship’s top speed, but the rest was a decision to have a smaller crew aboard but more automation.

The warp drive aboard the Ross is borrowed from that found aboard the Sovereign, though with slightly lower overall performance due to the larger size of the Ross. It is somewhat faster than the Galaxy, but her overall endurance is unchanged.

The saucer section is provided with warp power via a warp core running through the center of the hull; its ejection module and matter injectors occupy the space for the captain’s yacht aboard the Galaxy. This core powers a set of warp coils that wrap around the upper section of the saucer, and two sets of supplementary coils tied to the impulse engines. Together, they are capable of propelling the saucer at a modest speed of warp 6.

Small craft capabilities exceed the Galaxy’s capabilities by a significant margin, with shuttle bay one being a full fifty percent larger, with three sets of doors that can be operated independently for complex launch and recovery operations. Some of these vessels embark fighters, but most embark a small fleet of runabouts and large shuttles which help the ship carry out its exploratory mandate. 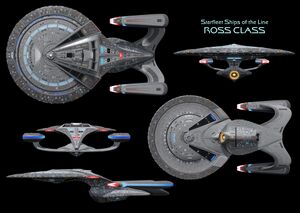 Orthographic views of the Ross class.

Tactical systems are roughly equivalent between the Galaxy and Ross-class designs, as of the start of the 25th century. The Ross has twelve Type-XII phaser arrays, including one only usable once the saucer has been separated. Burst fire torpedo tubes fore and aft provide powerful projectile weapon coverage, though they lag behind the abilities of other large explorers. She also has two additional single-fire tubes on the keel of the secondary hull flanking the forward tractor beam emitter, which enhance the ship’s close-in defensive capabilities.

Ross-class ships are intended to operate in the center of any formation they find themselves in, providing long-range covering fire to other smaller and more tactically-capable ships. On her own, she is capable of going one-on-one with nearly any other vessel in the Alpha or Beta quadrants, especially given the enormous amount of power that can be pumped into her shields thanks to having two warp cores. This class is a poor choice for explicitly tactical missions, however, because of her power-to-mass ratio simply not stacking up with a Sovereign or Inquiry-class vessel. 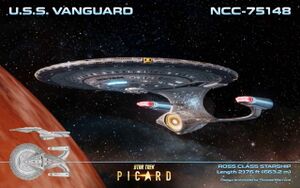 Ross-class starships are considered to be something of an oddity by Starfleet officers, as the design they emerge from is so iconic. Indeed, one of the reasons that a large number of Galaxy-class ships weren’t reconfigured into this new design is that Starfleet’s most senior admiralty have been reluctant to alter the lines of the original for marginal performance increases when incremental upgrades respecting the integrity of the original design have proven to be just as successful. Even still, they are large and prestigious vessels, with experienced and talented crews.

While those aboard a Galaxy-class ship would likely be reluctant to admit this upon visiting a Ross-class ship, the accommodations aboard the Ross are slightly better, as the smaller crew means that more individuals can have their own quarters. The promenade feature in the saucer section is also very popular. Each of these ships has multiple holodecks, holosuites, lounges, and other recreation facilities.

Medical facilities aboard the Ross are larger than those aboard the Galaxy-class, with about twenty percent greater bed space, as well as a proportionally larger medical staff despite having a smaller crew. Combined with their large hangers, this makes them a good choice for humanitarian missions, though they are still eclipsed by the Obena and Odyssey-classes in this regard. 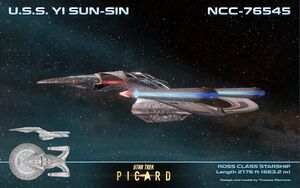 Following the Dominion War, Starfleet had a much larger number of Galaxy-class ships on hand than they did before the start of the war, thanks to the mobilization and completion of a number of spaceframes held in reserve; these large vessels operated without loss other than the Odyssey herself during first contact with the Dominion. Many of them were ordered and launched without their exploratory systems completed, and much of their internal volume left open.

One such vessel was the USS Ross, which was approximately fifty percent complete when the Treaty of Bajor was signed in 2375. With the Sovereign class now also in production, Starfleet ordered the Advanced Starship Design Bureau to consider options for integrating more of the technology found aboard these newer explorers into the Galaxy. Over the course of two years, modifications were made to the Ross that resulted in a leaner, slightly faster, and incrementally more advanced version of the Galaxy class, even as other vessels continued off of the line in the original configuration.

Extensive shakedown operations were conducted into the late 2370s, until the Ross was commissioned in 2379. Starfleet considered the project to be a success, but only ordered a small production run of this class, as it considered the Obena and Odyssey-classes to be more likely contenders as Galaxy successors. Indeed, the Ross herself never had leaps and bounds performance increases over the Galaxy.

What the Ross did lead to, though, were comprehensive refits of the Galaxy with enhanced tactical and computer systems, as well as tweaks to their warp drives to bring them on par with the Sovereign class. The successful test of a warp-capable saucer section also paved the way for a more advanced version of this on the Odyssey-class explorer. At least one heavily-damaged Galaxy-class ship was rebuilt as a Ross-class ship in the 2380s, but otherwise, the classes have continued on in parallel.

The Ross class In Play