Phasers are the most common energy weapon in use by a number of powers in the Alpha and Beta Quadrants, including the Federation, Cardassians, and Bajorans. Originally an acronym meaning “PHASed Energy Rectification,” phasers operate by the application of the so-called “rapid nadion effect (RNE),” using nadions to amplify the effect of superconducting crystals to create a coherent and highly-controllable beam of energy to create effects ranging from heating targets to causing targets to lose molecular cohesion entirely. 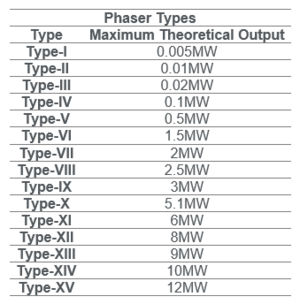 Phasers are classified both by their type rating (which is their theoretical maximum energy output) and their form factor (which is the type of device or implement they are constructed as). Their actual output is dependent on the power available to them; for instance, the benefit of employing a higher type of array than a vessel could comfortably use at full power is to increase reliability and fleet standardization. The increase in power between various phaser types is not equal across the scale due to the idiosyncratic properties of nadion fields, which makes some types uneconomical to use.

The maximum output for each phaser type is the theoretical limit at which the nadion field would collapse and the phaser would begin to damage itself, but the maximum output is dependent on a sufficient power supply. That is to say that a Type-X phaser on an Intrepid-class light explorer will be substantially less powerful than one on a Galaxy-class explorer because of the difference in their power plants.

While there are numerous types and form factors, phasers can be broken down into two larger styles: standard phasers use a single emitter crystal at the point where the energy leaves the device to focus the beam, while compression phasers use a barrel with either optronic or physical amplification (or a combination of both) to produce a more concentrated beam or pulse. Theoretically, most output classifications could be built in any form factor (i.e. one could build a Type-XV phaser rifle if one had a strong enough power source, or a Type-I phaser array if one had a use for it), though Starfleet typically uses just a few combinations of form factor and output types. The most common phasers in use as of 2399 are listed in the following sections.

Personal phasers are most commonly-issued weapons given to Starfleet personnel, and they are used for a wide range of purposes in defensive and exploratory applications. They are easy to use, sophisticated, and reliable.

Hand phasers are the most common types of phasers issued to Starfleet personnel, aboard ships and starbases, and for planetside duty. They are versatile, easy to operate, and highly portable, with most humanoids being able to operate them with just one hand. Starfleet hand phasers come in type-I and type-II versions, with the type-II version being the standard side-arm for nearly every situation; the type-I is generally only used when discretion about being armed is desired. Modern hand phasers can emit either bolts or coherent beams of energy, depending on the needs of the mission. Their settings range from Level 1 (Light Stun) to Level 10 (Kill) to Level 16 (Vaporize).

Early hand phasers closely resembled earlier types of weapons such as projectile-firing pistols, but by the 2350s, phasers were generally shaped less-obviously like a weapon and consisted of a long handle that curved down to the emitter point. The firing trigger is on the top of the device. By 2385, pistol-style hand phasers have been reintroduced to Starfleet, and both types continue to be produced.

These are the three most common models of hand phaser in service with Starfleet as of 2399: the Type-I and Type-II models introduced in the late 2370s that continue to be common across the fleet, and the newer 2385-era Type-II phaser compression pistol:

Phaser rifles are larger than hand phasers and are generally the heaviest personal weapons stocked aboard most Federation starships. While they have the same sixteen settings as their smaller counterparts, their power cells allow them to fire more quickly, for longer periods of time, and at longer range, which makes them well-suited to extended firefights. Generally speaking, A phaser rifle can fire twice as many shots twice as far as a hand phaser, in either bursts or coherent beams. They are only commonly used when combat is anticipated, and are not standard away team equipment.

These are the two most common phaser rifles in Starfleet service, both of which are compression rifles: a model introduced in the late 2370s and a ruggedized version developed in the late 2380s: 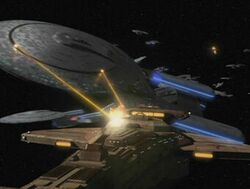 Phaser Banks were once the standard shipboard energy weapon in use by Starfleet, but have now been nearly entirely supplanted by phaser arrays, except on extremely old vessels and on small craft. They consist of a single phaser emitter segment that fires in a fixed direction, with aiming provided either mechanically or using magnetic fields.

Phaser Arrays are the current standard shipboard energy weapon in use by Starfleet, consisting of dozens or hundreds of interlocking emitter segments that combine multiple superconductive crystals to form a much more powerful beam than a single emitter segment could alone. Phaser arrays use magnetic fields to guide energy in certain directions for targeting purposes and have no moving parts. Phaser arrays have a visible build-up as a firing sequence is charged, with energy coming from two sides and meeting at the firing point. Arrays can fire multiple beams at the same time, as well.

The Type-X phaser array was developed for the Galaxy-class explorer and remains the standard phaser design in use for the majority of Starfleet's modern starships, especially those that are not regularly assigned to defensive missions. This type of array is powerful enough to go toe-to-toe with any Alpha or Beta quadrant power's vessels, though most starships equipped with them do not have the power to use them at their full 5.1 MW potential. This type was fitted to the vast majority of designs created in the later part of the 2360s and early 2370s, and most vessels originally equipped with Type-IX arrays still in service have been upgraded to this new standard.

The Type-XII phaser array first debuted in space aboard the Sovereign-class explorer and is the current standard for new ship designs and vessels intending to see combat. Originally known by its classified designation as the Type-X+, this system was originally used for large-scale planetary defense systems, but miniaturization and advancements in superconductor technology allowed it to be used on starships. Though this standard is over twenty years old in 2399, Starfleet has settled on the Type-XII as the best all-around combination of power, size, and reliability for starship phasers.

Pulse Phaser Cannons use a large, finely-tuned spherical focusing crystal as well as a magnetic focusing barrel to create powerful bursts of energy, being able to deliver massive amounts of fire-power in a single direction. Type-XII cannons are only employed on a handful of starship designs, and all of these designs are meant for combat. They require being mounted on a fast, maneuverable ship, because they lack the wide arcs of coverage that phaser arrays provide. They were first employed on the USS Defiant, designed as an anti-Borg weapon.

The Type-XV phaser cannon, sometimes referred to colloquially as a "phaser lance" because of its spinal mount, is a unique weapon designed exclusively for the twelve so-called Dreadnought-class starships based on the Galaxy spaceframe. Intended as a "Borg Buster," this weapon can deliver an extremely high amount of energy in a fixed direction, meant to overwhelm a Borg vessel's defenses before it can adapt. This is the most powerful weapon ever mounted on a Starfleet vessel, and in practice, it can cause significant damage to most known threat vessels.

While shuttles and other small craft were not routinely armed before the late-24th century, it is now common practice for the majority of Starfleet's vehicles of all sizes to have at least basic defensive implements. These weapons can also be used for scientific and engineering purposes.

While large shuttles and runabouts employ Type-VI phaser arrays, smaller shuttles and armed shuttlepods use either Type-IV or Type-V phaser banks. These weapons are nearly identical and operate under the same principles: a fixed phaser emitter is provided with limited aiming capability with magnetic fields, but in general the craft must be pointed directly at the target it wishes to fire upon. These weapons are suitable for limited air-to-ground fire support for away teams, but are primarily used as a deterrent against light raiders.

The Type-VI phaser array has been the standard energy weapon in use by all Starfleet runabout and large shuttle classes since the introduction of the Danube-class runabout in the 2360s. It is potent enough to prove a real threat to enemy vessels, but compact enough to not detract from the vessel's other mission priorities. Vessels equipped with weapons of this type are capable of serving in a point-defense role for their space stations or motherships, as well as being able to confidently travel through contested areas without an escort.

There are other types of phasers that Starfleet personnel use in the field which are too large to be used while carried and which have specific defensive or utility purposes.

Type-III phaser drills are tools with the same overall output potential as a phaser rifle, but with a ruggedized emitter, larger power source, and the ability to fire for sustained periods of time—up to several dozen hours at a time—before they need to be swapped out. This makes them capable of creating large passageways through solid rock, cutting through dense metal, and other such tasks. They can be aimed, fired, and then left to work without needing an operator constantly present, and they are substantially more ergonomic for drilling operations than hand phasers. They also have finer control over their beams to provide precisely the frequency and power level to cut through a particular material without causing unwanted damage or disruption effects. These are commonly stocked aboard almost every Federation starship that's expected to conduct planetary exploration missions and don't require specialized training to operate in their most basic settings.

Type-IV phaser cannons are too large to be carried and fired by hand and must be mounted on a tripod or to a vehicle, such as an Argo-type wheeled ground vehicle. These weapons are aimed and fired by a crew member who must turn them manually. Assisted targeting obviates the need for a complex scope and keeps their operation simple. These weapons are more common in colonial defense and dedicated tactical contexts than on most standard Starfleet vessels or starbases, but their size inherently makes them a defensive weapon, as they are too large to be brought along by most away teams.