The Hutet-class battleship is a rare Dominion War-era Cardassian warship, which saw service only in the closing months of the war. It is a massively scaled-up version of the same technology in use aboard both the Galor-class destroyer and the Keldon-class cruiser, and is the largest starship ever built by the Cardassian Military. Slow, unwieldy, and expensive to maintain, this class of ship has two purposes: the defense of important Cardassian worlds and the devastation of important enemy worlds.

With an endurance of only six months without support, the Hutet is not suited to exploratory missions of any kind. It does have a handful of science labs, but even a Galor-class ship would be a better choice for scientific missions. This class is meant purely for war.

The Hutet has luxurious accommodations for very senior officials and visiting dignitaries, but its chief diplomatic utility is its ability to devastate whatever planet it happens to be orbiting. These monstrous vessels are so resource-intensive, that the Cardassian Union would never send one on a diplomatic mission, except perhaps to secure the surrender of a troublesome word.

The Hutet is the largest starship ever built by the Cardassian Union, and it only vaguely resembles its smaller counterparts. While it maintains the standard ankh-shaped horizontal cross-section common to all Cardassian warships, the ship's forward section is nearly as tall as the wings are wide, providing it with an imposing cross-shaped silhouette from head-on. With more internal volume than even a Federation Galaxy-class starship or Romulan D'deridex-class warbird, the ship has six sets of warp coils in the wings, which still manage to only propel it at a very modest maximum speed of Warp 8.5, with an absolute emergency maximum of Warp 9.1. This low speed was deemed acceptable as the Hutet was not intended to keep up with the battle fleet, it was meant to either remain in defensive positions around Cardassian worlds or to secure planets after the main fleet had done most of the dirty work in space.

It is slow and ungainly at impulse speeds, using two primary impulse engines in the wings and two secondary ones lower on the main hull. This is usually not an issue, though, as the ship is meant to engage planets, stations, and other similarly ungainly large vessels.

The main reactor module on the stern is heavily shielded and armored but must be oversized relative to the rest of the ship to accommodate the massive heat dissipation systems necessary to keep the ship from frying itself at full power. While recent attempts have been made to increase the power and speed of this design, it has not been a high priority given the lack of widespread conflict in the quadrant. However, the Cardassian Union has quietly commissioned not only a Type-2 Hutet design since the war, but also a Type-3 and Type-4, using more modern equipment. These upgrades remain at the ready to be integrated into the existing Hutet-class ships, should war erupt.

The Hutet has a large hanger bay that runs through the center of the ship, from port to starboard. It carries 30 shuttles, as well as 6 Hideki-class patrol ships, which serve in a point-defense capacity and as air support during planetary invasions. Fully-loaded, the Hutet can support 10,000 troops.

The sheer size of the Hutet allows her to mount some of the largest space-borne weapons ever developed by the Cardassian Union. The most distinctive feature of this class is two sextuple heavy phaser mounts on the bow, which are interconnected with the twin primary deflectors. The output of these weapons is equivalent to the most advanced weapons used by other Alpha and Beta Quadrant powers, though keeping nimble ships in its firing arcs is a chore for the clumsy battleship. All-around coverage is provided by fourteen heavy phaser emitters, which are over three times as powerful as the smaller ones found aboard lesser ships.

Despite the prominence of the main phasers, the Hutet's signature weapons are its eighteen heavy torpedo tubes. These tubes were designed to handle munitions of many different sizes, with electromagnetic launching systems that can expand to handle heavy planetary bombardment weapons or mines or contract to handle standard torpedoes. As part of its standard ordnance, the Hutet carries gravimetric torpedoes, which are designed to devastate planetary ecologies both through the power of their explosions and through the devastation caused to the planet's crust and core by manipulating gravity. These heavy torpedoes are armored to survive atmospheric penetration and are larger than standard torpedoes. Hutet captains must choose carefully when to load these weapons, though, as it can take up to thirty seconds to reconfigure the launch tubes back to handling standard torpedoes, and that's enough time for a clever enemy to take advantage of the momentary vulnerability.

Twelve of the torpedo launchers on the Hutet fire directly port and starboard. This can both be used to launch weapons on firing trajectories that allow them to circle back towards targets directly fore or aft, or to fight opponents on all sides during pitched battles. Hutet-class ships have enormous standard torpedo magazines as well, which allow them to lob weapons from behind screens of smaller ships to assault enemy capital ships, as well as to wear down even the most hardened defenses.

Hutet-clas shields are nearly impenetrable, with multiple redundant generators located all around the ship. Combined with all-around weapons coverage forward, starboard, and port, the only chance an enemy would have to damage or destroy such a battleship would be to avoid its main weapons and get behind it to have a chance at hitting the reactor--though on a Hutet-class ship, its rear shields are actually the strongest, for this very reason.

The most common assignment for Hutet-class battleships is to serve as monitors, heavily armed but slow warships used for planetary defense. They rival many starbases in their sheer firepower and their low endurance makes them suited for little else. They are never found alone, and always have a fleet of at least twelve Galor-class destroyers and six Keldon-class cruisers escorting them, because the only real danger a Hutet-class vessel would be in is if it were swarmed by many smaller ships, wearing down its defenses from all angles.

When used for invasion scenarios, the Hutet can embark 10,000 troops. It has many large-scale transporters and can take over a planet's capital within hours. Given that it is also always accompanied by other ships, it would be the centerpiece of an invasion of 50,000 or more troops, serving as the command ship for a very senior legate and multiple legions.

As with smaller ships, Hutet-class ships have accommodations segregated by rank. It has an exceptionally large crew of 2,500 to keep all of its weapons operating and to provide security. It is not a particularly comfortable assignment compared to other large vessels of other powers, because of how much of its internal volume is devoted to troop accommodations and weapons. Because they don't generally stray far from home, the trade-off for this is more frequent opportunities for shore leave.

These massive ships have palatial suites for their commanding officers, who enjoy a standard of luxury far beyond that found on other Cardassian ships, given that command of these ships is only ever given to the most senior guls. Most of the existing Hutets also serve as the flagships for entire Cardassian Orders, and so have an even grander space for their legate.

Troop accommodations are very spartan, but the Hutet does not embark ground troops during its defensive missions.

As the Dominion War raged, it was clear that Cardassian shipbuilding lagged far behind that of its neighbors, as the burden for heavy firepower support was put almost entirely on Dominion forces. The Cardassian preference for medium-sized, medium-capability ships was failing to stand up to the Klingon preference for smaller, high-firepower designs, the Romulan preference for larger, highly-advanced designs, and the Federation's relentless ingenuity. As such, the Hutet-class design was rapidly developed as the ultimate Cardassian war machine, which would be the centerpiece of any Cardassian fleet. The Cardassian Military intended to build twelve massive starships to serve as the flagships of all of the individual Orders, vessels that would be able to coordinate massive planetary invasions and serve as impregnable bulwarks over Cardassian worlds.

The design that was developed was incredibly lopsided in capabilities. Cardassians lacked experience building large ships, even with Dominion assistance, and so the engine technology left the ship with a paltry top speed. They also cost more than thirty Galor-class destroyers to build and had massive crews. Only three vessels were completed by the time of the Battle of Cardassia Prime, being too late to have any impact on the war's ultimate conclusion. In practice, there were also teething problems with her advanced weapons, especially the torpedo launchers, which had a tendency to jam while being reconfigured to handle different munition sizes.

Following the war, the three existing vessels were used to transport refugees around the Union, their primary purpose gone. The remaining 9 space frames lingered in the shipyards, with six of them broken down within several years after the war to build non-combat vessels and to comply with arms limitations. Eventually, the remaining three were completed during the early 2380s, when it was feared that the Romulan situation would spiral across the quadrant.

Presently, the six Hutet-class ships are something of an albatross: they are theoretically very capable battleships, but their utility is limited in the absence of all-out war that would threaten either Cardassian worlds or allow the Cardassians to threaten enemy worlds. Still, they are a symbol of Cardassian pride and serve as the flagships of six of the twelve orders, while watching over important Cardassian worlds. It is not expected that more will be built, unless a war were to errupt.

The Hutet has been superseded in every way other than pure firepower by the Damar-class dreadnought, which is faster, more advanced, and capable of long-duration independent missions that the Hutet could never dream of. 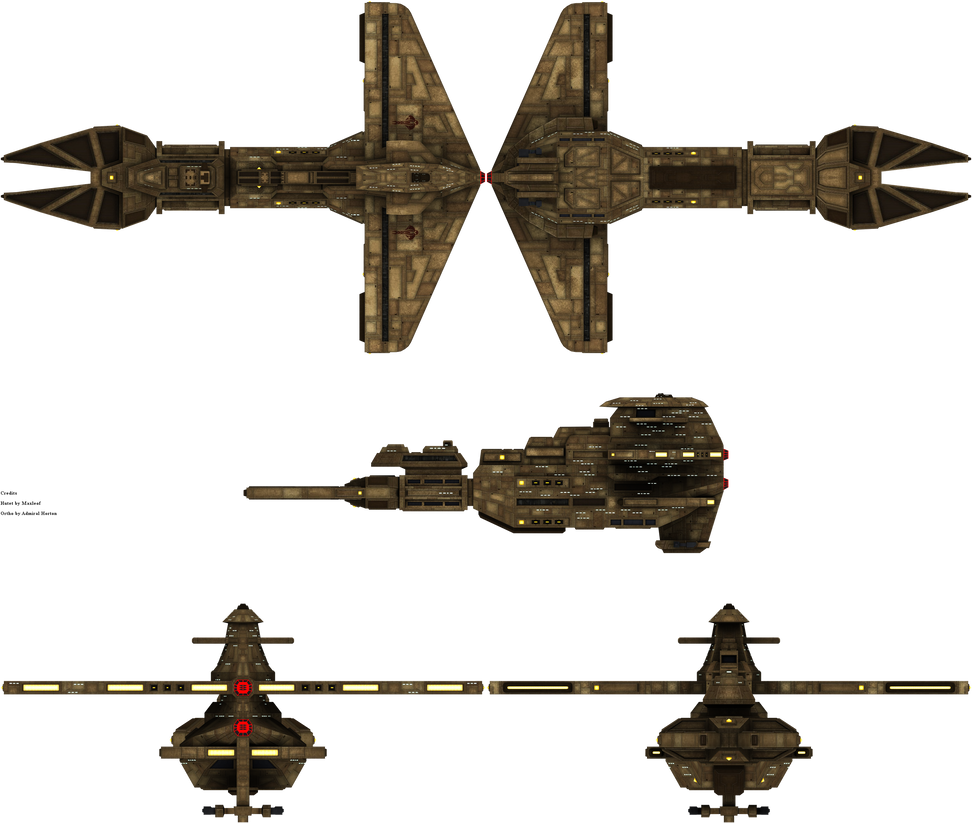