The Gagarin-class heavy escort is a medium-sized, well-armed starship intended for frontline command duties. The first of these vessels entered service in 2400, to supplement and complement the ubiquitous Reliant-class frigate with superior engineering support, command-and-control, and small craft capabilities.

The Gagarin has similar exploratory and scientific capabilities to the Reliant-class frigate, more than capable of performing missions across the range of Starfleet’s full mandate. Given their larger crews, though, they have more specialist departments onboard than on the Reliant, and their greater small craft space can support larger and more capable auxiliary exploratory vessels.

Operating with a task group of escorts or frigates, a Gagarin-class heavy escort hosts the senior officer present, often a flag officer, and coordinates not just any tactical maneuvers but provides the smaller ships with their orders. In turn, the Gagarin serves as a hub for relaying data back to Starfleet Science. As such, she possesses a very sophisticated bioneural computer system with processing power rivaling larger explorers. Much of this power is intended for intelligence-gathering efforts, but it can also be turned toward solving science mysteries.

Long-range sensor systems aboard the Gagarin are above average for a ship of her size; the leading edge of the upper nacelle pylon hosts a panoply of sensor pallets, and the powerful main deflector system allows her to look deep into space for tactical and scientific purposes both.

While there are several vessels that would be preferable for diplomatic duties (such as the Obena, Resolute, or Odyssey), the Gagarin-class heavy escort has enough diplomatic capability to handle light and medium intensity negotiations and conferences in a pinch. The same communications equipment aboard the Gagarin that makes it well-suited to coordinating patrol groups makes it a good choice for diplomatic talks that require significant input from Starfleet Command—especially helpful as the captains of these ships are not necessarily coming from diplomatic backgrounds. As a tactically-oriented vessel, though, it is not normally sent on missions early in the Federation’s relationship with a new species, as it could be seen as threatening.

Deceptively large, the Gagarin is a sleek, angular vessel that has a low profile from the front and rear to improve its evasive capabilities. The two large warp nacelles each have two sets of split warp coils, which improve efficiency and allow the ship to alternate between them to sustain high speeds longer than other ships of its size. The nacelles do not rise far above the body of the ship and are supported by two horizontal pylons each, which contain separate power transfer conduits for each set of warp coils, thus improving survivability and structural integrity. Two engines provide impulse power along the centerline of the ship.

While the output aperture is smaller than on some ships of this size, the main deflector’s generation and focusing systems take up a significant amount of space on the keel of the ship. This added deflection capability improves the ship’s efficiency at high speeds.

The nearly-circular primary hull has a two-deck depression on the dorsal surface, allowing for the windows on decks five and six to face towards the center of the ship, decreasing the number of vulnerabilities on the widest part of the saucer section.

With three shuttle bays, the Gagarin can handle a half-dozen runabouts in addition to a standard complement of small craft. The aft shuttlebay is typically used as the primary bay for day-to-day operations, while the two forward bays are used to house mission-specific vehicles like fighters or runabouts. Connected by a hanger deck between them, the forward bays are relatively shallow but help in simultaneous launch and recovery efforts and can allow an entire squadron of fighters to launch at once. 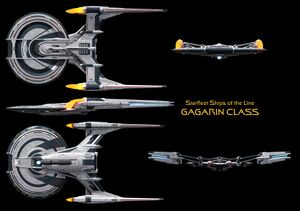 An orthographic view of the Gagarin-class heavy escort.

As the term would suggest, a heavy escort is a tactically capable starship superior to an escort but inferior to a heavy cruiser–what other powers would call a destroyer. As such, the Gagarin falls in a tactical range between the Reliant and Inquiry classes but has superior exploratory capabilities to a frigate. A total of twelve Type-XII phaser arrays and eight torpedo launchers make the Gagarin a formidable adversary. Her shallow forward profile makes her ideal as a tip-of-the-spear, charging in with impressive forward firepower while avoiding retaliation. Like most ships of her era, the Gagarin has heavy ablative armor and powerful shields, which allow her to shrug off most hits, at least at first. She is most vulnerable to attacks from above or below, where the advantage of her low profile is lost.

Intended to lead the smaller Reliant-class ships during their patrols on the edge of Federation space, the Gagarin is a better choice than most heavy cruisers for front-line command duties, as she can comfortably wade into the fray with the same confidence of success as the ships she is leading without risking too many lives. She can easily go toe-to-toe with cruisers of other races, as well. This is the ship-of-choice for tactical command on duty stations where light to medium combat is expected, rather than simply being capable of combat should it be required.

When so equipped, the forward shuttle bays allow for the rapid deployment of a fighter squadron or runabouts, which enhance the Gagarin’s tactical abilities by providing distraction and covering fire to allow the ship to line up its strafing runs against single targets or by keeping the ship from getting swarmed by vessels it can’t out-maneuver.

The ventral surface of the secondary hull hosts eight mission-configurable rapid deployment tubes, which can be used for a number of different probes, buoys, pods, drones, or munitions.

Still rare, Gagarin-class vessels are considered choice assignments by many new officers because they are being sent to the edges of the Federation. As they are the centerpieces of small patrol formations, their crews often see them as elite, even if the more impressive Manticore and Prometheus-class heavy escorts beat them out in many ways. Gagarin-class ships don’t spend much time scanning planetoids or taking gaseous particle samples but keep their sensors focused past the Federation’s borders. They are often tasked with customs and piracy interdiction duties, and so crews on these ships become used to tense situations.

As a cutting-edge starship, accommodations aboard the Gagarin are comfortable but not necessarily luxurious. As much of her internal volume is given over to tactical systems, her crew are treated to roughly the same standard of living as those on the Reliant-class frigates they coordinate. This generally means shared quarters for enlisted personnel and ensigns, conjoined bedrooms for lieutenants, and private quarters for senior officers.

Unlike explorers, a Gagarin isn’t meant to provide for smaller ships’ materiel and crew support needs, just to coordinate them, so its recreational and medical facilities are only large enough to provide for its own crew. The ship has a handful of holodecks, a larger number of holosuites, and the standard assortment of lounges and mess halls that one would expect aboard a Starfleet vessel. Medical facilities consist of one standard sickbay module with provisions to convert guest quarters into additional ward space if necessary. Should a task group need additional medical support, it would be accompanied by a utility cruiser or medical vessel.

While the Inquiry-class heavy cruiser had proven to be an early and resounding success for a relatively large, combat-capable vessel and the Sovereign was becoming by the 2390s a more ubiquitous flagship platform, Starfleet recognized a need for a medium-sized command ship to be sent to less-important duty stations around the Federation. For instance, a Sovereign would be a poor use of resources to lead patrols along the Kzinti border, as well as too tempting of a target. The presence of such a large ship might be enough to turn minor raider skirmishes into a concerted attack to remove the threat.

The brief for this new class was given as a combat-capable vessel that could coordinate and support frigates, scouts, and escorts with a minimum of fuss in difficult duty stations. The Gagarin-class design was developed throughout the late 2390s using similar technologies to those employed aboard the Reliant-class frigate. While not intended to be a one-for-one replacement of the Akira-class heavy cruiser, the design incorporated some of that class’s small craft abilities with simplified versions of her torpedo armaments.

Starfleet approved the Gagarin-class heavy escort in 2397, and the prototypes began their shakedown operations in mid-2399. The class was certified for deep space service in early 2400 and is now in full production.