Difference between revisions of "Gradin Belt" 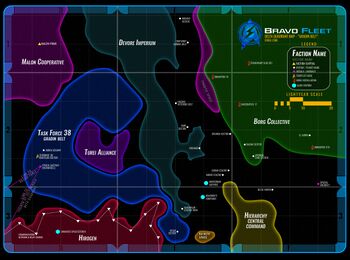 The Gradin Belt is a region of the Delta Quadrant several thousand light years in diameter approximately 40,000 light years from Federation space. It serves as a primary area of operations for Task Force 38, connected to the Barzan System (Alpha Quadrant) ninety-one days by way of the Barzan Wormhole. Of all of the areas in which Task Force 38 operates, this one is the most well-explored and well-studied. It is a confluence of many different advanced powers and so is currently a diplomatic hotbed.

In 2388, Task Force 38 relocated to the Gradin Belt after Battle of the Round Table, to distance themselves from an area that they feared would soon be completely under Borg Control, in addition to being massively unstable in subspace. In late 2388, researchers discovered an aperture for the wandering Barzan Wormhole in the Epatha System. While it was initially unstable, a science vessel was able to help stabilize this aperture of the wormhole, in combination with one in the Barzan system and another ship past the Nekrit Expanse. Presently, this connection allows supplies and ships to transit back and forth on a regular basis.

There are no major Starfleet facilities besides a relay station at the mouth of the Barzan Wormhole in this area of space, nor are there any Federation colonies.

The Gradin Belt in Play

Note: This is an OOC section designed to give players and group managers a sense of what this area of space is all about.