While this is not an all-inclusive list, Starfleet Facilities are broadly categorized in the ways listed here, referring to their importance, their size, and their position in the chain of command. 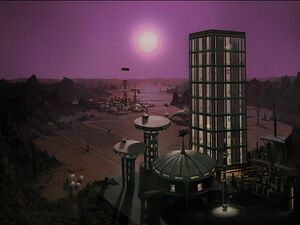 Starbase 11, an example of a starbase with a major surface presence, but only a the basic orbital infrastructure needed to repair starships.

A starbase is the largest level of facility command in Starfleet, referring to the senior command in a sector or a section of a very major sector.

A starbase is the central hub for command and control for a large area of space, and so it is based either from a surface installation or a major space station. Often, starbases have both ground and orbital facilities, with total crews in the tens of thousands. Starbase 375 is an example of a starbase that is only located on one station, Starbase 11 is predominantly ground-based with only a handful of minor orbital stations, and Starbase Bravo is an example of a starbase that has both major orbital and ground facilities. Starships not assigned to a particular task force take orders from the starbase in their sector. 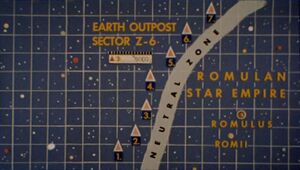 A map of outposts Zulu I through Zulu VII, which were located along the Romulan Neutral Zone in the 23rd century.

Outposts are smaller commands located near the borders of Federation space, where they serve to monitor and defend a section of space. Customs enforcement duties are a common task for outposts. Outposts can be based in space or in ground facilities.

The Sierra Outposts are an example of this type of command; they were established shortly after the Earth-Romulan War and focus entirely on surveilling and defending the Federation-Romulan border. The Sierra Outposts report to Starbase 39-Sierra, the anchor of the Kaleb sector defenses, the name of the starbase and outposts referring to the Earth Starfleet code-name for that section of the border. Some outposts have mission profiles other than defense: Outpost Seran T-1 is a research station where the dilithium crystal chamber for the USS Enterprise-D was designed. In this case, that outpost reported directly to the Advanced Starship Design Bureau rather than a sector's starbase. It was designated an outpost both because of its remote location and to conceal the nature of its mission. Ajilon Prime is an example of a colony which also had a Starfleet outpost, though this one appeared to be entirely surface-based. Outpost is also an informal term in general for colonies or other territorial possessions of the Federation. 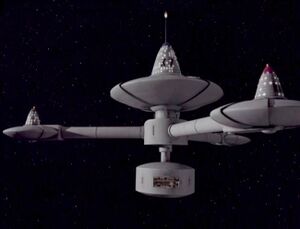 Deep Space Station K-7, one of the K-class stations built along the Klingon Border in the 23rd century.

They range in purpose depending on their location, but are often used as staging points for Starfleet's exploratory vessels. Many deep space stations serve in an advanced warning capacity, functioning similarly to outposts in that regard, but they are generally larger and more independent than outposts. The current Starbase 38 was originally designated Deep Space 38 until Barzan II became a member of the Federation, while Deep Space 9 retained its original designation due to the high degree of name recognition with that designation earned during the Dominion War. 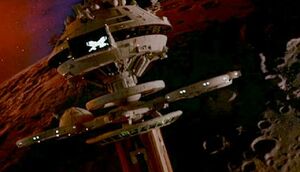 Science and research stations are located all over the Federation, conducting research that is too dangerous to be conducted in populated areas or which requires specific microgravity conditions. These tend to be smaller facilities, often with entirely civilian crews even if they report in some way to Starfleet. They are often disconnected from their local sector's command structure. An example is Research Station Tango-Sierra, which is in the Sierra system but does not report to Starbase 39-Sierra, but instead directly to Starfleet Medical. Regula I itself is an example of a station under civilian leadership, even though the station itself was built, maintained, and supplied by Starfleet. Jupiter Station in the Sol system is an example of a station under Starfleet control which also has civilian scientists aboard. Science stations report to Starfleet Science and the relevant branch, such as Starfleet Biology or Starfleet Physics. Stand-alone hospital stations would also fall under this category, reporting to Starfleet Medical.

Before its destruction in 2385, Utopia Planitia Fleet Yards was the most important starship construction facility in the Federation. The Galaxy-class ships were built here, along with the Defiant and Voyager.

A shipyard or fleet yard (fleet yards are generally larger, but the nomenclature is not always used precisely) is a command that focuses entirely on constructing, maintaining, refitting, and dismantling starships. These commands typically contain multiple space stations, drydocks, and/or planetary facilities. They are well-defended because of their strategic importance; especially after the attack on Mars in 2385, unidentified vessels approaching Starfleet shipyards will be treated with hostility. While any starbase is capable of constructing starships of some size, distributed production has its limits for supply chain and quality assurance reasons, which means that the Federations major shipyards are some of its most important assets. Some shipyards specialize in a specific task: Devron Fleet Yards, for example, was built to maintain ships for Admiral Jean-Luc Picard's rescue armada. Surplus depots are a kind of shipyard that specializes in storing unused starships (and even space stations) and/or stripping them down for parts, an example being Surplus Depot Z15 over Qualor II, which is operated by the Zakdorn on behalf of Starfleet.

These facilities range in size from a few drydocks to hundreds of berths for starships. Many shipyards are larger than starbases and even count starbase-type stations among their facilities. Utopia Planitia Fleet Yards had no fewer than six Presidium-class stations alongside dozens of drydocks and extensive ground facilities on Mars before its destruction. All shipyards report to Starfleet Shipyard Operations, a division of Starfleet Engineering.

The following 12 pages are in this category, out of 12 total.